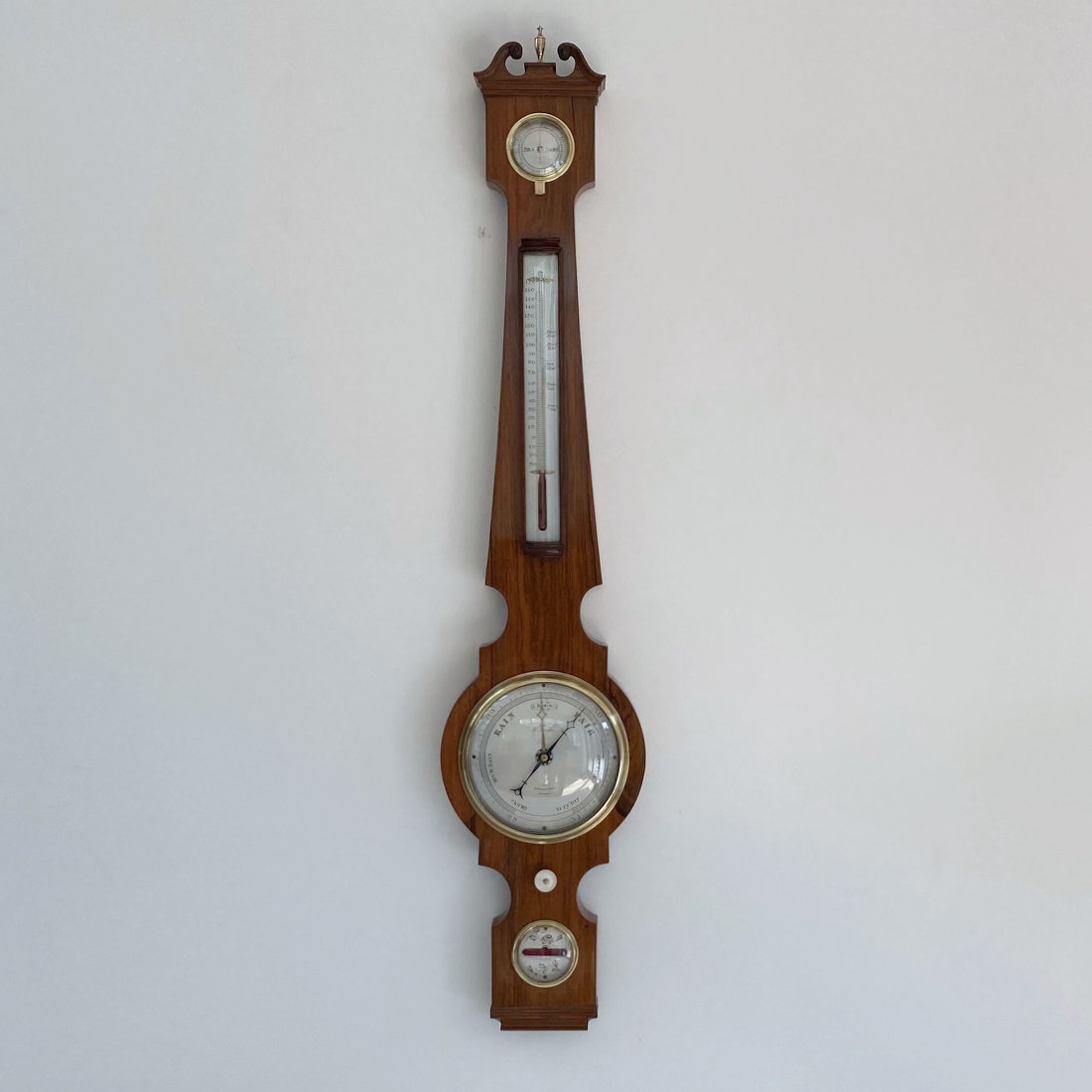 Comprised of a body lavishly adorned with beautifully figured rosewood veneer this rare six-inch dial wheel barometer sports a swan neck pediment with brass urn finial to the centre. The head of the body includes a removable wheat beard hygrometer with silvered dial and convex glass front, below that, the flared neck is provided with a bow fronted glazed thermometer case with silvered Fahrenheit scale and a red spirit thermometer. The dial is comprised of a small six-inch silvered dial with brass spun bezel and convex glass front. The barometer scale is divided for 28 to 31 inches of barometric pressure with weather indications provided on the inner circumference. The centre of the dial has a simple leaf motif engraving around the spindle and blue steel pointer and brass set hand operated by the dial below.

The base is designed in the familiar 1830’s style with angular vertical lines and in-swept hips culminating to a brass spirit level with florally engraved silvered front piece, brass bezel and convex glass.

The Amadio family were prolific instrument makers throughout the first half of the Nineteenth Century. As is evident from the name, the family were of Italian heritage and like most Italian emigrant instrument makers of this period, were most likely to have originated from around the Lake Como region of Northern Italy.

The maker of this fine example, Francis Amadio is considered to have arrived in London at the turn of the century but is initially registered as a maker of artificial flowers. Exactly how Amadio was trained in the arts of instrument making and by whom remains unclear, but it suggests that he received his training after his arrival. His earliest dates reflecting his instrument making career start at 1820 at St Johns Street Road and he maintained business within the street until the turn of the 1840’s.

Francis had two sons, Francis Junior and Joseph, the former seems to have joined his Father in business from about 1840 to form Francis Amadio & Son. Three years later, Francis Amadio senior died, leaving Francis Junior in sole charge of the business which he seems to have continued throughout the 1850’s and 1860’s until he finally joined forces with his younger brother Joseph.

The younger sibling ran a very successful business latterly more concerned with the new industry relating to microscopy and with Francis Junior’s death in 1866, he continued to trade for many years under his own name. He died during retirement in 1892.