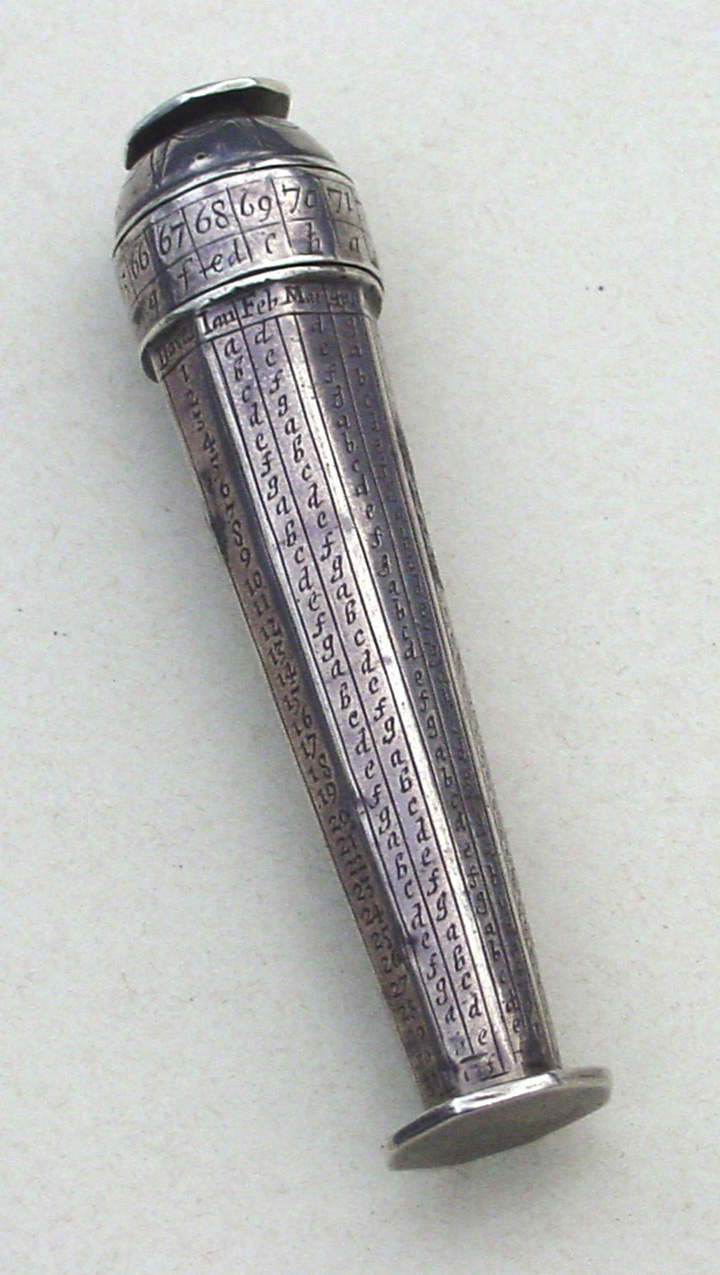 For sale, antique 17th century compendium, probably English, made of silver. It disassembles into five components including a miniature horizontal sundial as well as a glazed compass with tiny shaped needle. It also features storage compartments for writing materials, or candle, or....

HOROLOGICAL COMPENDIUM IN SILVER, probably English, c. 1663, standing 3-3/16″ (8 cm) tall when assembled. Constructed of silver (with some internal fittings of heavy silver plated brass), the compendium disassembles somewhat as a “penner,” into five components: (1) a tapered eight-sided body very finely engraved with two columns of “Dayes” from 1 to 31, and twelve columns of repeating sequential day letters “a” through “g”,” one column for each “31-day” month of the year. Three internal holes in the body could store very small materials (quill, cutter, wax, etc.); (2) removable cap engraved with the year from 63 to 78, each with corresponding one or two day letters; (3) miniature horizontal sundial with folding gnomon inclined for approx-imately 43° latitude, 5/8″ (16 mm) diameter chapter ring (4 am – 8 pm, Northern hemisphere), and glazed compass with tiny arrow shaped needle with shaped brass hub. The base of the sundial, which faces upward when the compendium is assembled, is engraved with a lovely seven-pointed rose; (4) octagonal screw-on cap which could hold a small wick, etc., and which serves as a foot for the sundial; (5) octagonal screw-on base which could hold, for example, a candle. Thus we have a pocket calendrical / horological / compendium which could carry small writing / letter sealing material. Condition is fine, noting several small dents, some wear around the base of the body, and wear to the threads.

As to origin, the language is clearly English (“Dayes”); the numeral shapes do have an English look, except for the seraphs on the “1’s” and the accentuated tail on some of the “7’s.” The latter is found, interestingly, on some of Henry Sutton’s engraving (see, e.g., Gunther, 1936). The measured sundial latitude, if accurate, is quite interesting, suggesting manufacture for the Mediterranean, or even for the early American colonies (Boston, Albany,…). As to date, the tables give a ready clue, as they present a perpetual calendar for the days of the week. Starting with “a” for 1 January, there is a continuous recurring cycle through the seven letters for the full year. Meanwhile the table on the cap gives the Dominical letters for years 63 through 78. Thus “63” is “d,” making 4 January a Sunday, in complete agreement with the Julian calendar in effect in England in 1663. The Dominical letter for 1763, by contrast, and of course under the adopted Gregorian system, is in fact “b.” We find further complete correspondence through the years 1663 – 1678, so this perpetual calendar compendium must have been constructed c. 1663, for use over the next 15 years. A remarkable device, of high quality.