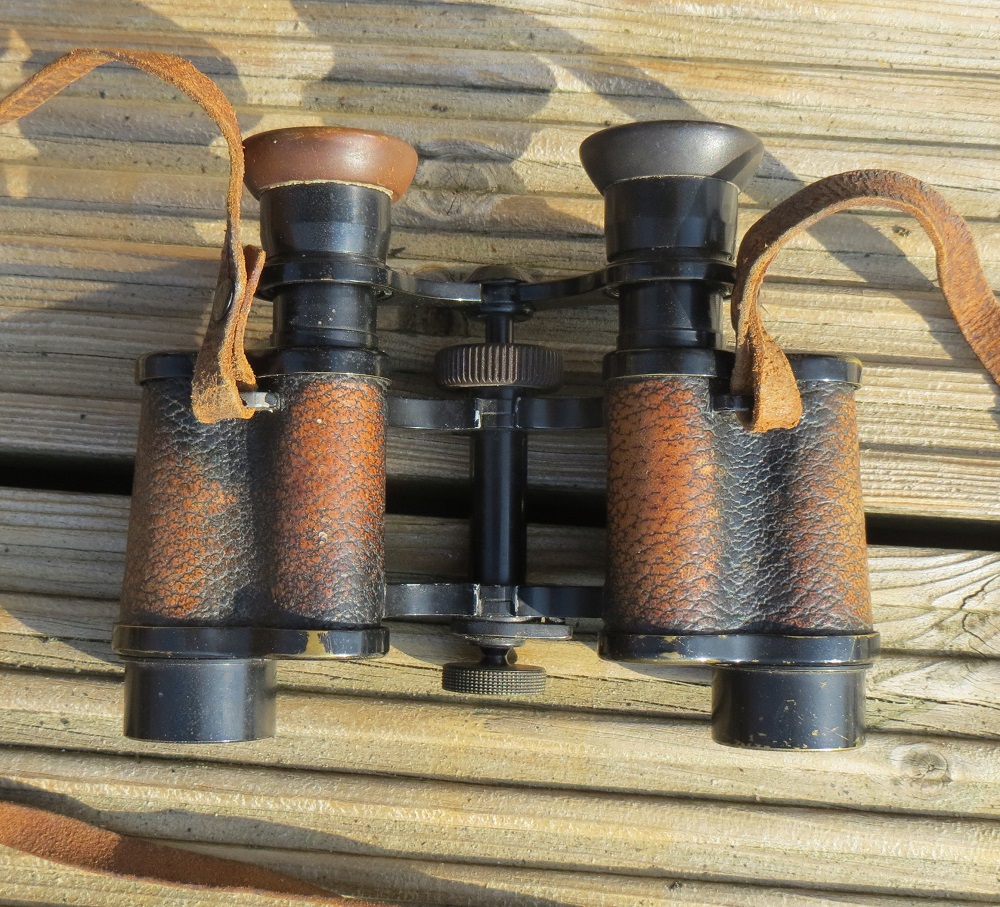 A pair of x8 Hensoldt Wetzlar binoculars, dating from 1910

For sale is a neat and fully functional pair of 8x Hensoldt Wetzlar binoculars, apparently dating from before WW1, engraved with the owner's name. This was Baron Dimsdale, of Meesden Manor, Buntingford.

These Hensoldt binoculars are labelled HENSOLDT WETZLAR, BERLIN & LONDON, on the top faces of the body. The base has “Sterior” marked on the centre focussing end stop. On either side at the base the inscription/engraving reads: “Baron Dimsdale” on one side, and “Meesden Manor   Buntingford” on the other. Plus some original data markings, showing “N. S. L.  G167”. The serial number on the focus bar is 1l963, there are other marks internally,  the lens units are stamped 174, and the prisms 271.

Charles Robert Southall Dimsdale became Baron Dimsdale in 1898, but died in 1928. He was actually the last to live at Meesden Manor – he was succeeded by his son Edward Charles, and then his son, Thomas Edward Dimsdale. A letter to Meesden Manor in 1995 gained a response from Wilfrid Dimsdale, son of Thomas Edward.

The family is descended from Thomas Dimsdale, an MP and Doctor, who went to Russia in the 1760s, in order to inoculate Catherine the Great’s son against smallpox. The results were a success and Catherine rewarded Dimsdale with £10,000, a pension of £500 per annum, £2000 expenses and a Barony of the Russian Empire.

Meesden Manor was not quite so fortunate. It was acquired by the family in 1833. In the 1900s Thomas Edward was a regular Army officer, serving in India prior to WW2. During the war the area around the house was requisitioned for use as a camp for delinquent allied soldiers, mainly Americans. The house was not used for such, but in 1944 a V1 Flying bomb, aimed at London Bridge, missed, and hit the house. It was finally demolished after WW2.

The objectives have a clear diameter of 24mm. Marked on the body is presumably the magnification, which is X 8.  The glasses undoubtedly had to have been acquired by the late Baron, who died in 1928: but because of the Berlin & London marking on the body, by the manufacturer, they must have been produced before the start of WW1, somewhere between 1900 and 1914.

The binoculars give an excellent image, and are easy to use: the original strap and leather case is included.

I first started using a telescope in the 60s, to identify aeroplanes arriving at Yeadon airport, in Yorkshire. Then I started to collect and restore vintage brass scopes in the 1990s. The collection boomed later, in the early days of the internet, rising to around 300 in number. Since then I have made a lot of friends via the internet, advising them on how to identify, date or repair their scopes. At the age of 74 I need to disperse these wonderful bits of engineering history, because they still work today as well as they did 200+ years ago! That is the fascination....Some of my collection have already been sold to collectors spread around, in the UK, USA, Ireland, Israel, France and Germany. Several have been returned to the UK descendants of the people who made them, or relatives of their previous owners, because they found the stories on my website. Now the collection needs to be dispersed more systematically. If you are looking for a specific telescope, just ask, maybe I have one! If you want better pictures of the telescopes shown here, these can be emailed. Nick Denbow, based in Alresford, Hampshire: contact via email on [email protected]