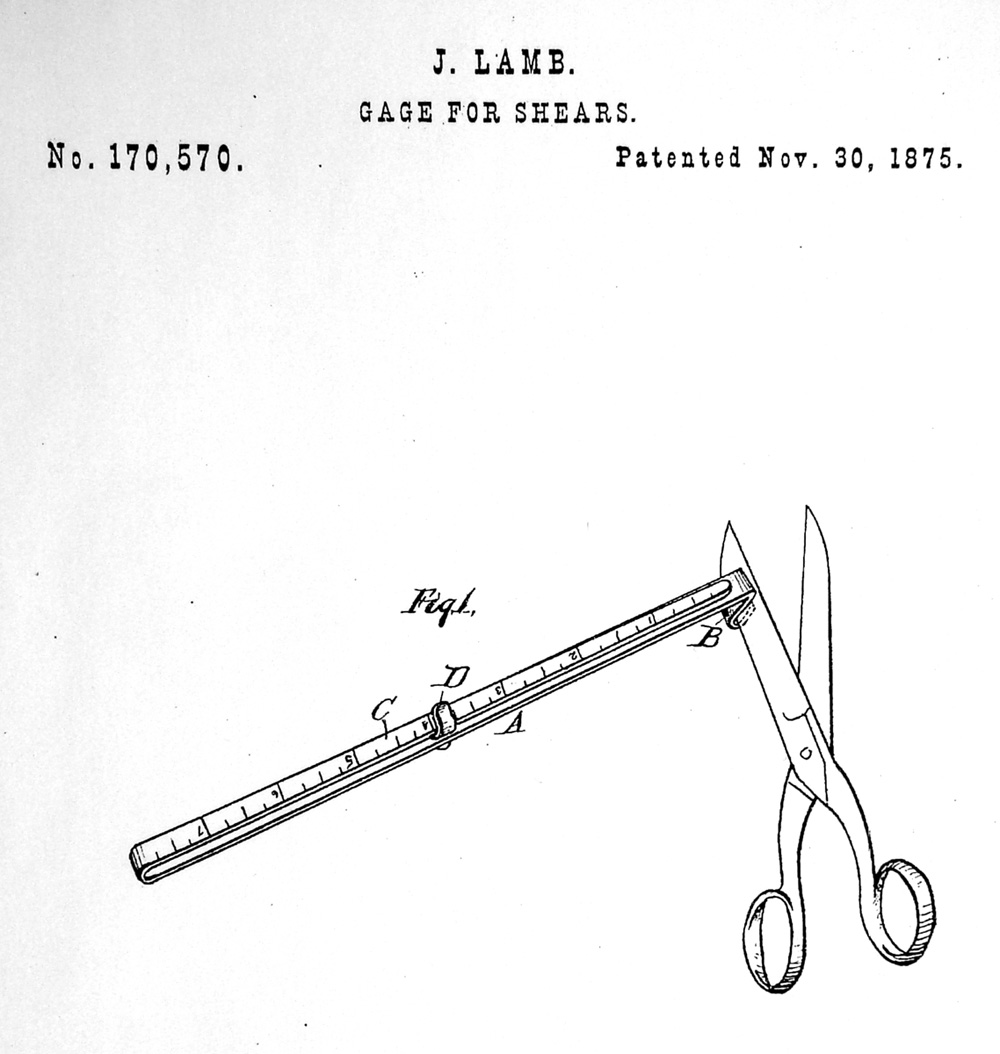 FOR SALE: An interesting American patent model from the 19th century. A curious rule in the form of a life-size "model" submitted to the U.S. Patent office as required at the time. The design was to enable the tailor to make the most economically effective use of the fabric.

“GAGE FOR SHEARS” — A RULE ACCESSORY FOR SCISSORS, 1875, patented by John Lamb of Jeffersonville in Sullivan County, New York, granted U.S. patent 170,570 on 30 November 1875.  This curious rule is made of a tapered strip of brass, folded and mounted with a sliding stop.  This life-size “model” has an overall length of 8-5/8” (22 cm), and the upper surface is graduated every quarter-inch from 0 to 8.  Condition is complete and fine except the brass now quite dark.  Included are the original handwritten and printed U.S. patent office tags.

Lamb’s invention would be clipped on to one blade of fabric shears, the stop set for the width of fabric desired, and the material pulled through the slot while cutting.  Material was expensive in the 19th century, and the tailor needed to cut as precisely as possible.  According to Lamb “This gage saves time, saves goods, and a true bias of any desired width may be cut with it.  It may be attached to any shears or scissors.”                                         $950.

This item is an original U.S. Patent Office models.  Starting in 1790, a model was required for submission with any patent application, and was retained by the Office for examiners to compare with granted patents and with later submissions.  The U.S. is, curiously, the only industrialized nation to ever have had such a requirement.  The model had to be no larger than 12” x 12” x 12”, and had to show how the invention worked.  The government’s models were very well respected in the 19th century, being placed on public display, and being salvaged from more than one disastrous fire.  But by 1880 the Patent Office was overwhelmed with these three-dimensional applications (more than 200,000), and said “No more.”  A model would only be required for a lighter-than-air vehicle, for a perpetual motion machine (!) or if the Commissioner specially requested one to understand the patent.  The models ranged from new improved bed springs to submarines, from mop handles to orreries, and provide a remarkable visual history of the inventiveness of America during the Industrial Revoultion.  They came from little known inventors in deepest rural U.S., from the Bells and Edisons of the world, and even from a president (A. Lincoln) in the metropolis.  Each model is unique, and is a miniature window into local and national history, as well as mechanical ingenuity.  Despite being such an extraordinary treasure of historical artifacts, the models suffered badly.  Deaccessioned by the U.S. government, the bulk were purchased by Sir Henry Wellcome in 1925.  They have gone through several hands since, some now at the Smithsonian Institution, some at private Patent Model museums, and some in collectors’ hands.  The following were acquired by us directly from O. Rundle Gilbert, who had purchased the bulk of the models in the 1940’s, bidding against a scrap dealer.