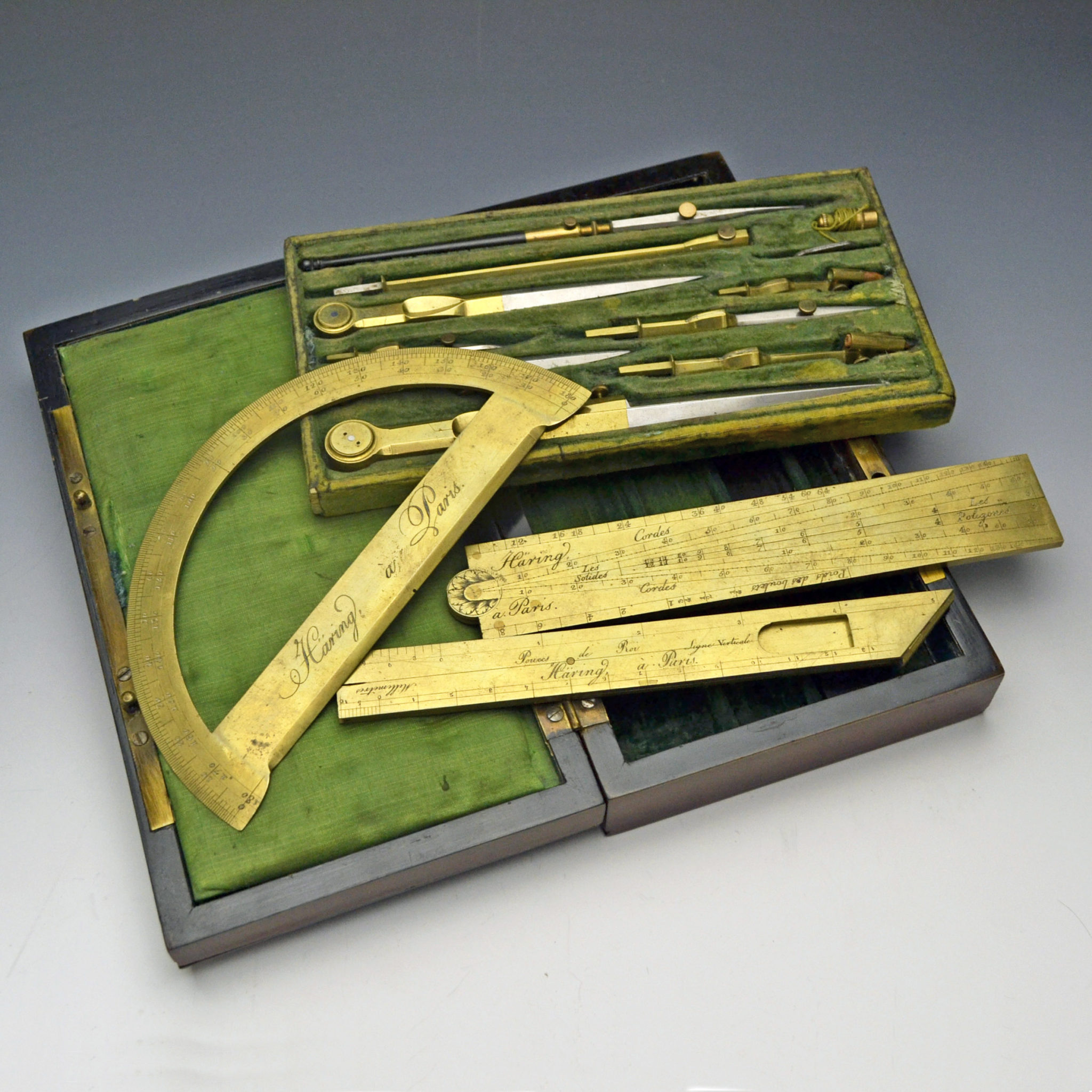 Complete drafting set by Häring in impeccable condition, circa 1800

A complete and beautifully engraved brass and steel drafting set by Häring of Paris in a multi-tiered mahogany box. The main tray contains three compasses with complete drawing attachments, a fine plumb bob with original silk thread, and an ebony handled rule pen with an unusual hidden interchangeable pricker. The lower tray and lid pocket include finely decorated sector, square and protractor all signed “Häring a Paris,” the engraving very well done with nice floral sector joint and many flourishes to the signature. The lower tray also contains the original ebony straight rule with ogee moulding. The box is polished mahogany with ebony trim, the interior lined in green velvet and silk.

Häring was an engineer and optician who worked in Paris at the turn of the 18th to 19th century. He signed several instruments as “Opticien de S.M. le Roi de Wurtemberg, à Paris. ” He worked at the sign of the Golden Eagle No. 63, according to his trade card (final image).

Häring is already mentioned as an established scientific instrument maker in the 1809 Paris Almanac, where his shop is listed at “au Palais-Royal no. 63”. In the 1813 publication “The Hermit of the Chaussée D’Antin, Or, Observations on Parisian Manners and Customs at the Beginning of the 19th Century,” there is a wonderful description of a young dandy buying unnecessary expensive eyewear at Härings:

“To change a lens for my glasses, I entered Häring’s opticians at the same time as a young man whose face would have seemed to me more agreeable if his gait had not been so insolent; there he purchased a pair of silver-gilt eyeglasses, a gold spectacle, and spyglass lunette. Asked by the optician about the number of glasses he used, he agreed that he had excellent eyesight: that he only bought a spectacle to have the opportunity to suspend it from his neck by a silk strap of a very showy color; that he only made up his mind to wear spectacles so as not to be obliged to see all those who greet him; and that he only used a spyglass on the balcony of the opera to make himself noticed in the boxes”

Häring is later described in the 1821 “Annales de l’industrie nationale et étrangère” (Annals of domestic and foreign industry) as winning a prize for his scientific instruments: “M. HAERING, engineer-optician in Paris, maker of Instruments of Optics, Mathematics, and Physics, that, among which the Central Jury singled out a very good achromatic bezel for which he was awarded an honorable mention”

The condition of the set is impeccable, in a like-new state with a fine, even patina, only a few minor fingerprint spots and some wear to the velvet.

Instrumentum specializes in high quality 17th and 18th century scientific instruments for architecture, mathematics and navigation. We have collected antique instruments for over 20 years with a focus on early and rare European architectural drafting sets, dividers, and rules. If you are interested in something particular please contact us at [email protected] Image galleries of our inventory can be viewed on Pinterest and Facebook at the following links: