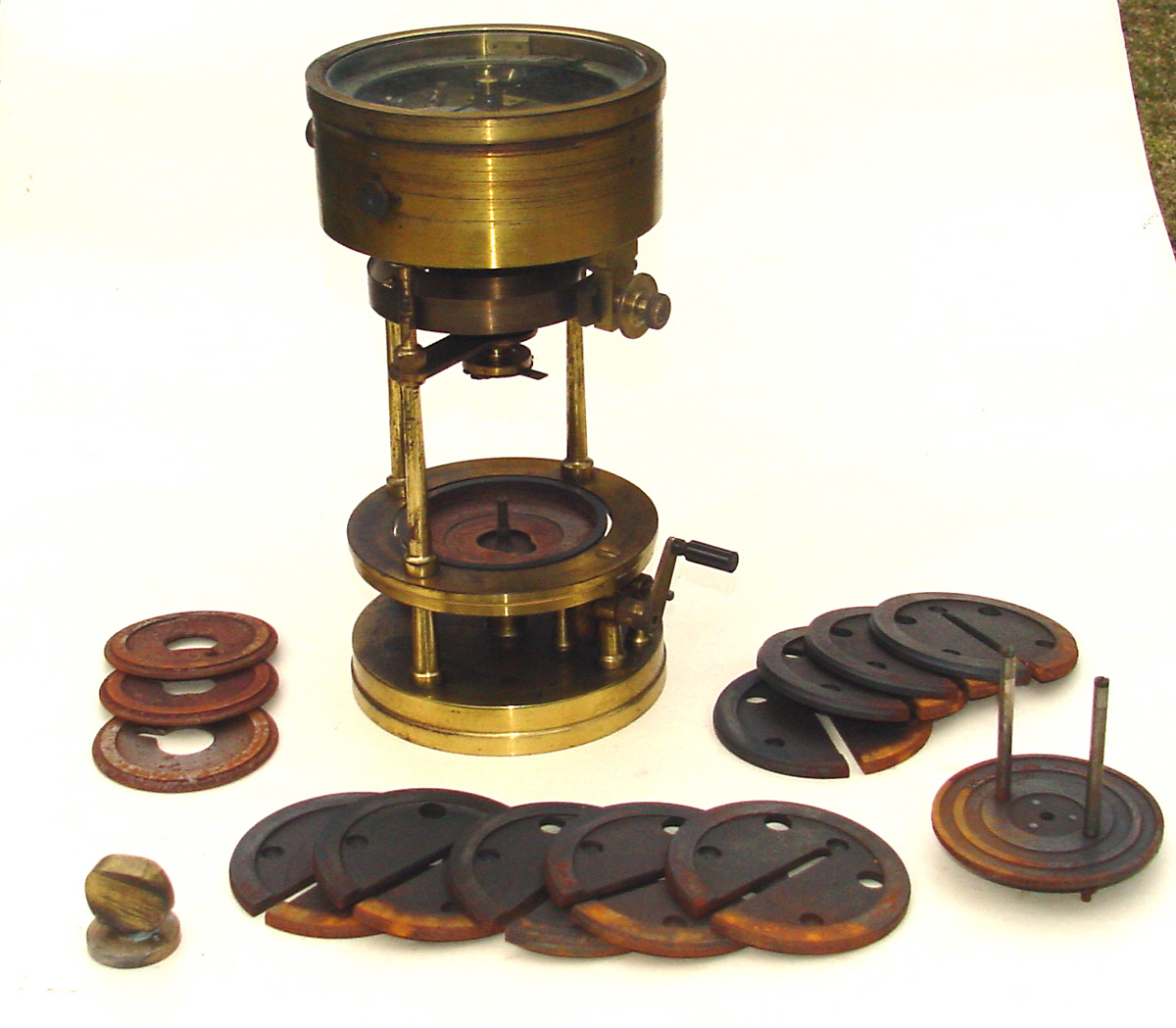 For sale, an unusual outfit, it was designed to measure the friction of lubricants. This is the larger laboratory model of the apparatus, with which one cranks the lubricated stage plate, on which rests the feet of the weighted assembly, and records quantitatively the moment of frictional slippage.

DEELEY’S ADSORBED FILM TESTING MACHINE, English, c. 1920, signed by the maker on an interior plaque “No. 32, R.M. Deeley¹s Patent; J.H. Steward Ltd., 406 Strand, London, England,” with three patent numbers c. 1918, and signed by the retailer on a case plaque “Herman A. Holz, Testing Machines of High Quality, 17 Madison Avenue, New York.” Made of bright lacquered brass, this unusual instrument stands 11-3/4″ (30 cm) tall on four levels separated by turned brass columns. The lowest section has gearing with two crankshafts for low and medium speed rotation of the main stage at the second level. The third level holds the mainspring, and the rotating shaft assembly which drives the dials in the glazed readout canister on top. Two blued steel pointers, which are mounted to a squiggle-worked lacquered brass gearbox, read against silvered scales of 0 (1) 100 and 0 (0.01) 1.00. There are several control knobs, for zero-adjustment rotation of the main scale, for zeroing and locking the small pointer, for engaging a train of steadying wheels, etc. The finely made 19″ tall fitted mahogany carrying case has a large drawer of accessories, including four interchangeable steel stage plates, upper assembly with three stud feet and nine stackable cast-iron weights, crank handle, etc. Condition is fine noting some wear to the finish, and some rust on the iron and steel. Workmanship is of high quality throughout, and the machine has quite an intriguing “look.”

Identifying this unusual device was something of a challenge for us. Despite the professional plaques, the three patent numbers may well be rogue numbers. And R. Mountford Deeley, onetime locomotive superintendent for the Midland Railway, was a bit hard to track down. But finally we have in hand the 1927 (5th) edition of Lubrication and Lubricants, by Archbutt and Deeley. Described in detail on pages 412 to 420, the machine was designed for quantitative frictional testing of lubricants, and was made by Steward in two models, the Simplex and the more sophisticated Laboratory, as offered here. In use the weighted assembly engages the spring and gearing to the pointers, but its stud feet sit freely on the lower stage plate. One applies lubricant to the stage plate, then cranks this plate slowly, and records the point at which the studded assembly slips, when the static friction of the surfaces is balanced by the strain on the spring above. It is a simple test, but a rather complex mechanical design is necessary for accurate and reliable results. We are pleased to offer this example of a rare and interesting apparatus.