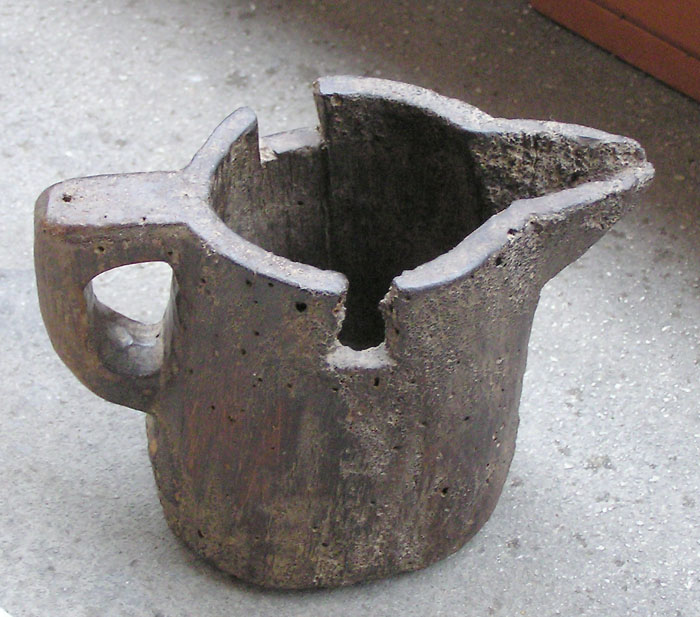 For sale, an early wooden volume measure, antique, from Portugal. The vessel is for the Portuguese system of measuring liquids, and was standardized in 1575.

EARLY PORTUGUESE VOLUME MEASURE, probably northern Portugal, c. early 19th century. Carved from a single block of wood, with handle, pouring spout, and overflow notches, the vessel measures 4″ (10 cm) tall. Condition is fine, noting old deposits and a few worm holes. This vessel would have served as a secondary standard measure for liquids; when filled to the level of the two notches, through which any excess liquid spills away, it contains approximately 294 milliliters. The Portuguese system of volume measure for liquids (oil, wine, etc.) was standardized by King Sebastiao in 1575, and successfully continued in use until the adoption of the metric system in the 19th century. The principal unit was the almude, subdivided into twelfths (the canada) and forty-eighths (the quartilho). There were also half-units of each of these. But the actual volume of the almude remained very much a local matter; for example, in Lisbon it was the equivalent of 16.54 liters, but in Porto 25.08 liters (Doursther, 1840; Noël, 2009). So our vessel falls between the quartilho of Lisbon (345 ml) and the meio-quartilho of Porto (261 ml); it must represent one of the innumerable local volumes in use at the time. The construction is typical of vessels from northern Portugal. For more background on the subject, and for examples of primary standards, see Weights and Measures in Portugal (2007).