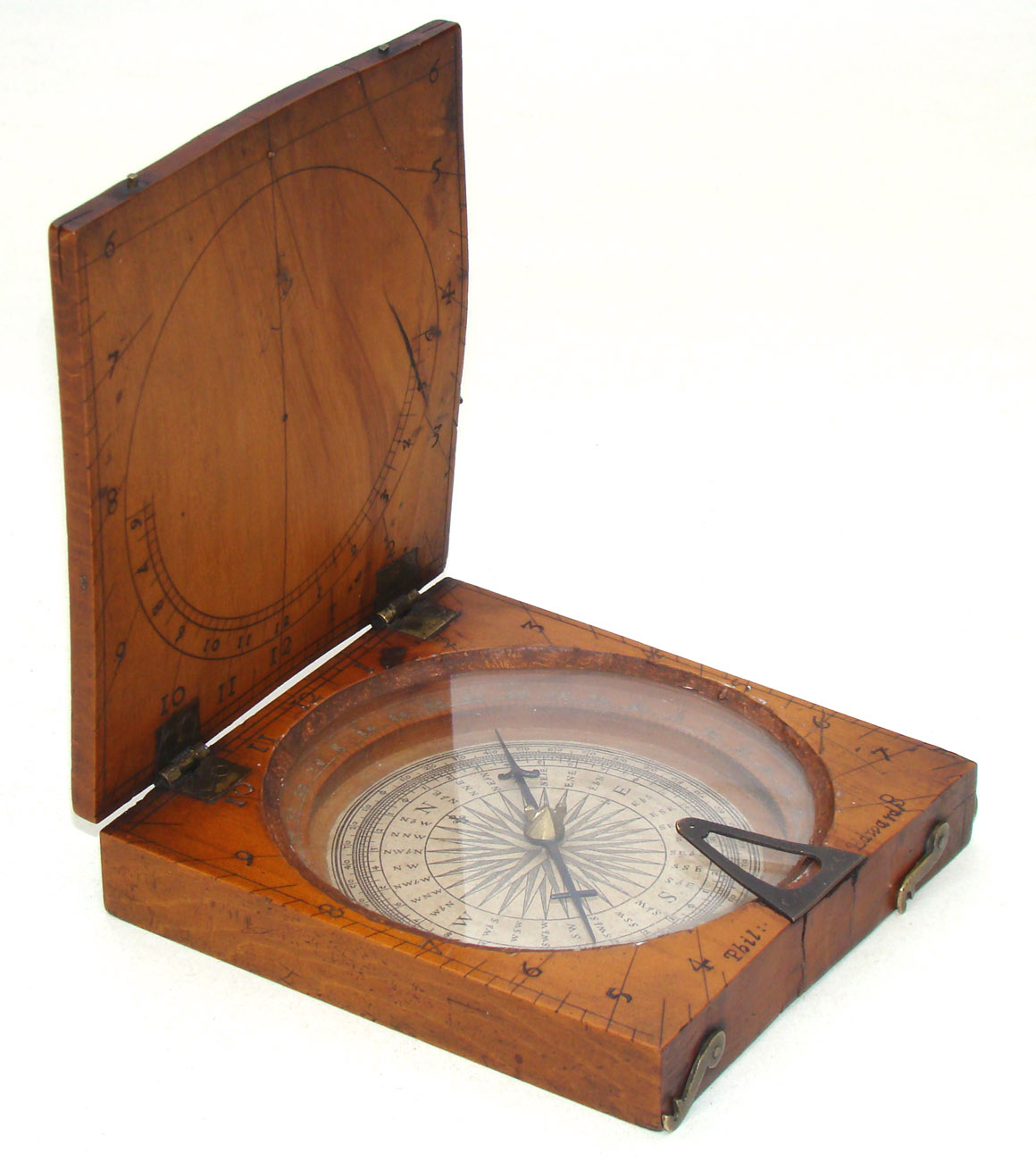 For sale, antique 17th century boxwood diptych dial, signed "Phil. Edwards." This interesting instrument has a dial on several of the surfaces and there is also an inset glazed compass necessary to orient the dial to geographic north. Edwards was a fine craftsman; however, the boxwood is rather warped, but the dials are fully functional.

FOUR-SUNDIAL COMPENDIUM, English, c. second half 17th century, signed “Phil. Edwards.” Constructed of fine boxwood, this unusual diptych compendium measures 4″ x 4-1/4″ x 1″ (10 x 11 x 2.5 cm) closed. Surface Ia is divided, every quarter hour, with a twice-12 hour scale full circle, and would work in summer, when the sun is above the plane of the equator, with a central straight pin as gnomon. Surface Ib is again divided, half-circle, from 6am to 6pm, functioning similarly in winter. The pin gnomon must be aligned parallel to the earth¹s polar axis, and thus inclined to the horizontal by the user¹s latitude; this inclination is set by a fine brass strut divided every 2° from 0° to 90°, and with central slot engaging a pin. Another dial is inscribed on Ib, this a vertical dial for a fixed latitude (approximately 50° N), divided 6am to 6pm, and maintained vertical by the strut engaging a second pin. The string gnomon for this dial would run from a brass fitting on the base to a hole on top. IIa uses the same gnomon for its horizontal 4 am – 8pm dial, which surrounds the large inset glazed compass required for orienting the sundial exactly towards geographic north. The compass has a fine arrowhead needle, a circumferential scale of degrees, and an interesting printed paper rose with its own degree scale plus 32-point rose with 32 labeled directionals and subdivided to 256 points of the compass. Surface IIb is blank. Condition is very fine except the boxwood badly warped and with hairline cracks. The warping is stable and the instrument fully functional.

The maker Phil(ip) Edwards was a fine craftsman (except for his choice of the pieces of boxwood!) but is not listed in the standard references. Clifton records a number of Edwards’s as instrument makers, but the only ones of the right time period are Richard (working 1660 -1667) and his wife Mary (working 1668), noting they had as apprentice one John Yarwell! Here the numeral and letter shapes are rather specific to English work of the second half 17th century, and the lack of any indication of magnetic declination on the compass rose suggests it was made c. 1660 – 65, when the declination in London went through zero.