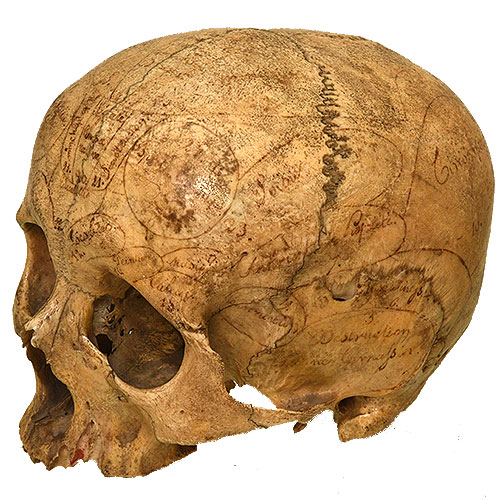 Phrenology (from Ancient Greek φρήν (phrēn) ‘mind’, and λόγος (logos) ‘knowledge’) is a pseudoscience which involves the measurement of bumps on the skull to predict mental traits.  It is based on the concept that the brain is the organ of the mind, and that certain brain areas have localized, specific functions or modules. It was said that the brain was composed of different muscles, so those that were used more often were bigger, resulting in the different skull shapes. This led to the reasoning behind why everyone had bumps on the skull in different locations. The brain “muscles” not being used as frequently remained small and were therefore not present on the exterior of the skull. Although both of those ideas have a basis in reality, phrenology generalized beyond empirical knowledge in a way that departed from science. The central phrenological notion that measuring the contour of the skull can predict personality traits is discredited by empirical research. Developed by German physician Franz Joseph Gall in 1796, the discipline was influential in the 19th century, especially from about 1810 until 1840. The principal British Centre for phrenology was Edinburgh, where the Edinburgh Phrenological Society was established in 1820.

Phrenology is today recognized as pseudoscience. The methodological rigor of phrenology was doubtful even for the standards of its time, since many authors already regarded phrenology as pseudoscience in the 19th century. There have been various studies conducted that discredited phrenology, most of which were done with ablation techniques. Marie-Jean-Pierre Flourens demonstrated through ablation that the cerebrum and cerebellum accomplish different functions. He found that the impacted areas never carried out the functions that were proposed through the pseudoscience, phrenology. However, Paul Broca was the one who demolished the idea that phrenology was a science when he discovered and named the “Broca’s area”. The patient’s ability to produce language was lost while their ability to understand language remained intact. Through an autopsy examining their brains, he found that there was damage to the left frontal lobe. He concluded that this area of the brain was responsible for language production. Between Flourens and Broca, the claims to support phrenology were dismantled. Phrenological thinking was influential in the psychiatry and psychology of the 19th century. Gall’s assumption that character, thoughts, and emotions are located in specific areas of the brain is considered an important historical advance toward neuropsychology. He contributed to the idea that the brain is spatially organized, but not in the way he proposed. There is a clear division of labor in the brain but none of which even remotely correlates to the size of the head or the structure of the skull. While it contributed to the advancement in understanding the brain and its functions, remaining skeptical is something that was learnt overtime. Phrenology was argued to be a science, when in fact it is a pseudoscience.

While phrenology itself has long been discredited, the study of the inner surface of the skulls of archaic human species allows modern researchers to obtain information about the development of various areas of the brains of those species, and thereby infer something about their cognitive and communicative abilities, and possibly even something about their social life. Due to its limitations, this technique is sometimes criticized as “paleo-phrenology”.