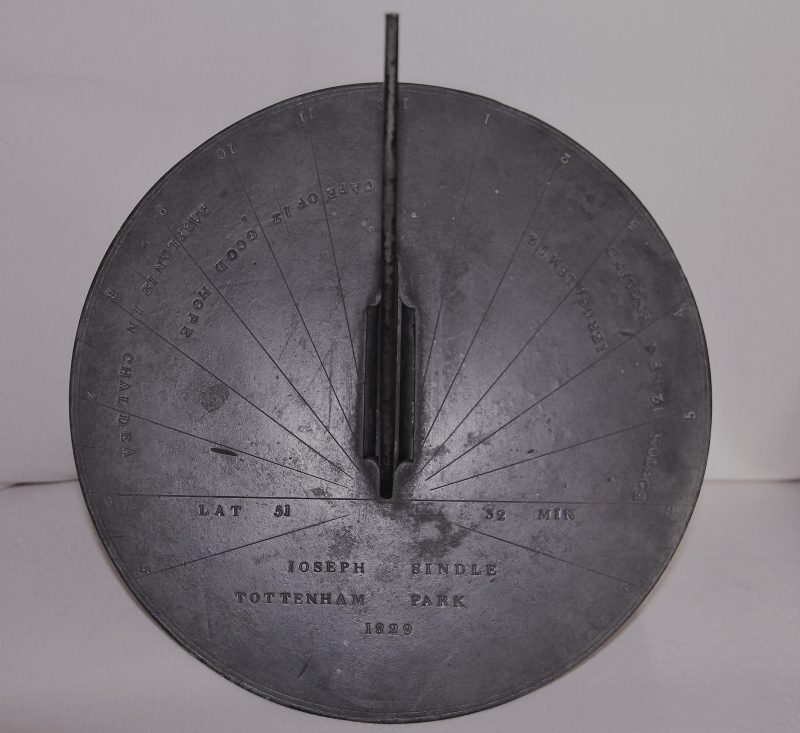 An important and unusual nine inch bronze sundial by Joseph Sindle for a specific location within the grounds of Tottenham House (Savernacke Forest-Tottenham Park) latitude 51 degrees, 32 minutes and dated 1829. Cast at  a more northerly latitude (53 degrees?) and with gnomen purposely bent for this specific location within Tottenham Park, this sundial has some unusual world locations included on it’s face. i.e. Boston New England, Jerusalem, Babylon in Chaldea and Cape of Good Hope.

Tottenham House (1200 acres near Malborough, including Tottenham Park) is latitude 51,37’36” and dates back to William the Conquerer. Descended (gifted) to Sir William Esturmy c.1400 and then by descent to the Seymour family (c. 1450-1700), and Brudenell Family thereon, it was re-modelled in 1760 by Lord Ailsbury (Earl of Cardigan) into a fine Georgian manor house. Ailsbury, being a scholar and politician in London under the reign of George III and IV, lobbied for free trade worldwide, and perhaps this would explain the various locations of the sundial including Africa, America and the Middle East. The house started to fall into disrepair during and after the war (used as a hospital) and was a boarding house/private school in the 1990’s. The present Marquess of Ailsbury (Brudenell-Bruce family) mismanaged the estate and it was sold a few years back for 12M pounds ( 10,000 per acre). The present owner probably annexed the park and sold off the artifacts therein. There is one other recorded sundial by Sindle (Websters c.1800, a polyhedral, now in Oxford, reference Taylor 2, #1219).

Mark Hacking (Scientifica Opticae Inc.) has been an avid collector/dealer for over 30 years. A former Science teacher, he has an innate love for anything natural or mechanical. Specializing in optical (microscopes, telescopes), surveying, medical, weighing and drawing instruments, he is an active participant of the Scientific Instrument Fair in London. Living in Stratford, Ontario, Canada, with his wife and two children; Mark looks forward to meeting as many fellow collectors as possible, and has a worldwide following on eBay (Sciopti).