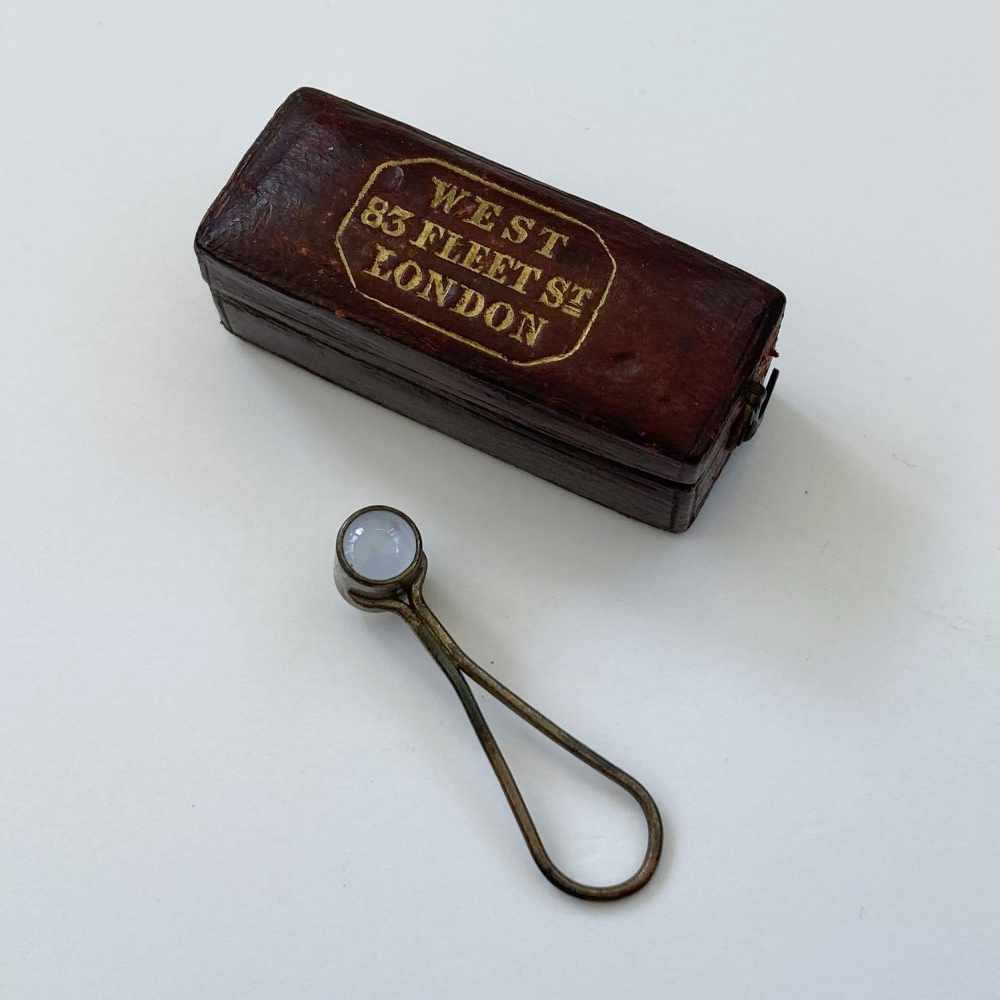 The Stanhope lens so called because it was considered to have been invented by Charles, The Third Earl Stanhope, is a simple microscope comprised of glass cylinder with two convex ends and which could be used for rudimentary scientific investigation. It was popularised due to its easy accessibility to the public in a period when microscopy was a growing phenomenon.

Enclosed in a German silver collar and loop, this example is stamped to “West, Inventor” and comes complete with its original morocco leather hinged case with red velvet fitted interior. It is further marked to “West, 83 Fleet St, London” in gilt lettering to the lid.

It is unclear how West improved Stanhope’s design, but he was known to have been an enterprising character during his life and took full advantage of marketing opportunities.

An advert for the lens that appears in the Comic Almanack in 1836 reads:

“Christmas – I tell you what?

It is mounted to be worn like an eye glass, in gold, silver or metal; will suit every sight, and has the uses of the microscope without the trouble of adjusting. Observe, the genuine can only be procured of the original maker, Francis West late Adam’s, Optician to His Majesty, 83 Fleet Street, or through any of the London Booksellers. The name “West Inventor” is stamped on the genuine instrument.”

West quite clearly had a flare and an appreciation of the power of the advert and his reference to the Adam’s family seems to be somewhat fantastical given that Dudley Adams had entered bankruptcy proceedings some twelve years prior to West opening his business in 1828. It is likely that the Fleet Street connection was good enough reason for him to shoehorn the use of the Royal Appointment into his literature.

West certainly did have some credentials, he had undertaken a Spectacle Makers Guild apprenticeship in 1806 and upon obtaining his freedom in 1828 moved directly into the retail trade where in addition to spectacles, he sold numerous other scientific instruments and “intellectual toys” and is considered by some to have also invented the bell whistle. He was also known to have sold reprints of numerous eighteenth-century texts by famous scientific instrument makers.