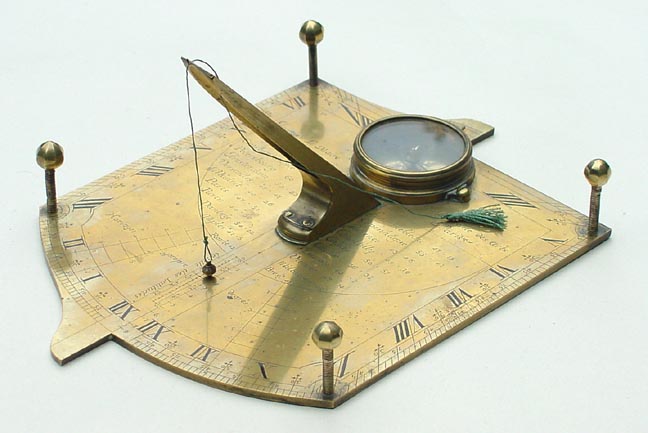 For sale, antique 18th century, French precision sundial designed by Julien Le Roy, the premier clockmaker of the first half 18th century. The dial was made by Jacques le Maire, a master craftsman and instrument maker.

JULIEN LE ROY’S IMPROVED HORIZONTAL SUNDIAL, French, c. 1740, signed “Jacques Le Maire de La Societe des Arts, au Genie a Paris.” The substantial brass dial plate measures 7-1/4″ x 9-3/4″ (18 x 25 cm) overall, and is set with a glazed compass with fine eight-point rose, a broad 49-degree gnomon pierced with four pinholes and with slots to support the brass plumb on silk cord, and four pommel-headed leveling screws. The compass rose can be rotated by external pointer reading against a 0(1)20 degree scale of “declinaison occidentale” (west declination). The periphery of the dial plate is engraved with a full chapter ring, divided every five minutes from 4am to 8pm. The plumb bob hangs against a scale of latitudes, divided every degree from 35 to 60, for using the dial at other locations, with the plate tilted up or down using the long leveling screws. A list of 20 European cities and their latitudes is finely engraved on the surface. As described, this is a significant, finely crafted horizontal sundial of rather standard form. But it has additional very special features. There are three radial scales reading outwards in units from 0 to 9. And two index stubs extend an inch beyond the dial plate to the north and south, exactly in line with the 12 noon line.

This is an example of the precision sundial developed by Julien Le Roy (1686 – 1759), the premiere French clockmaker of the time, first president of the Societe des Arts. New designs of clocks and watches were achieving much improved precision, on a consistent basis, and there was a need to reset and regulate them with the true standard, i.e., sundials of high precision. In 1734, Julien Le Roy presented his new design, which was communicated to the Royal Society of London in 1736 by Desaguliers (see A. Turner, 1988, for a transcription of Desagulier’s translation). For high precision a dial must be accurately leveled, and the gnomon oriented truly parallel to the earth’s axis (and therefore suitably inclined and oriented to true geographic north). Le Roy’s index stubs and three radial scales (called the Meridional scale and the scales of Correspondent Heights) met this need. In use the dial is placed on a horizontal table, sometime before noon, set to the latitude, and rotated until a sun-spot falls on one of the numbered intersections of the Meridional center line scale. One scribes lines on the table, along the two stubs, and connects them. Then after noon one turns the dial and, when the same pinhole casts a spot on the same intersection, draws a second line on the table. Bisecting the angle between the two lines gives the true direction to geographic north, and the dial should be set along this bisection line. To verify that it is the true meridian, one waits a few days, then checks whether a morning and afternoon passage of a particular sun-spot crosses the morning and afternoon scales of Correspondent Heights in exactly the same positions. If not, the whole process is repeated until correct.

The present dial was crafted to Le Roy’s specifications by Jacques Le Maire (working 1714 – 1762), instrument maker and fellow member of the Societe des Arts. An important instrument, in very fine condition throughout.