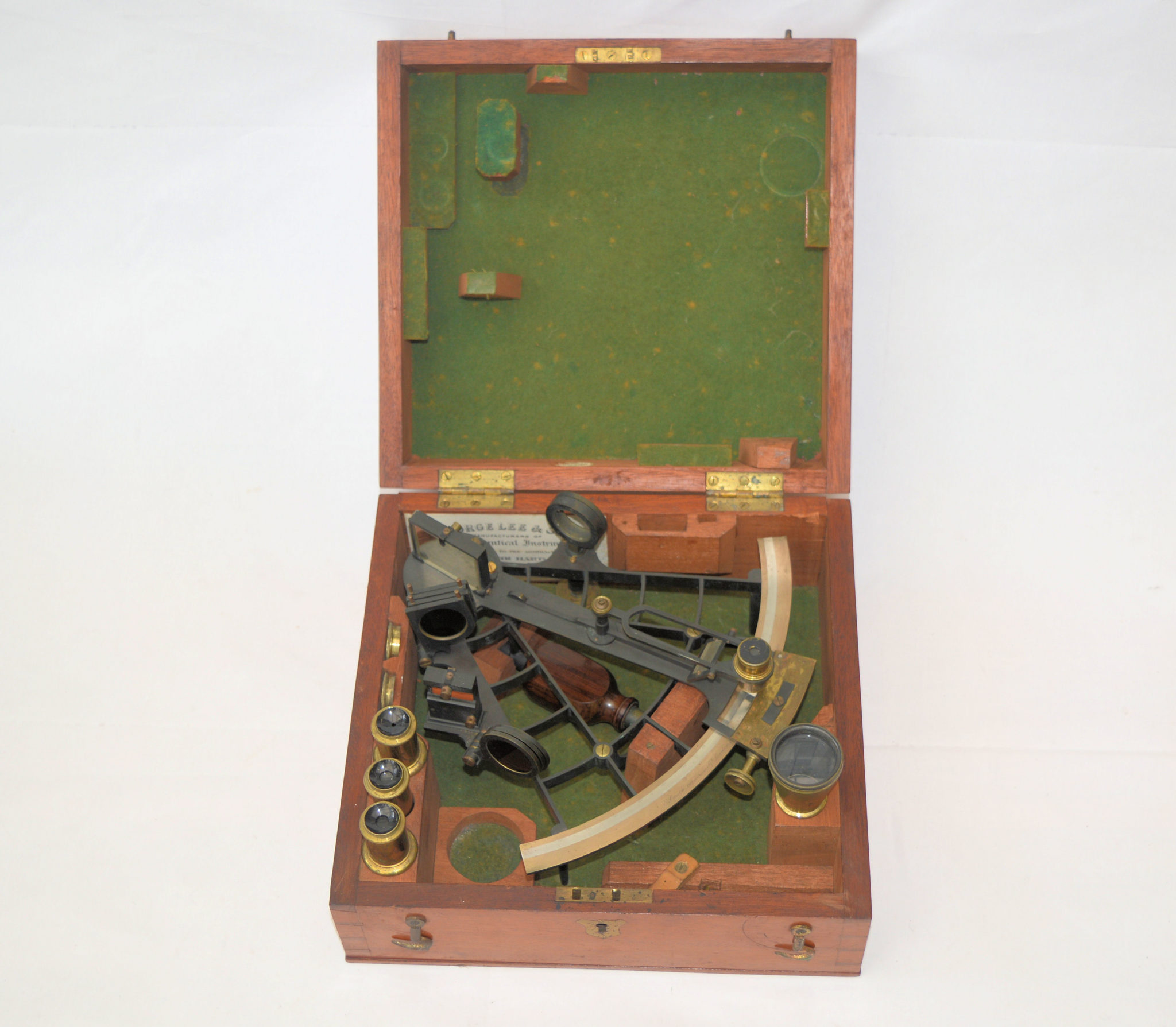 A brass ladder frame sextant, signed on the arc, ‘E. Smith, 11 America Sq., London E, Maker to the Royal Naval College, Greenwich’, the seven shades and two mirrors are very good / excellent, the scale reading -5 to 150, the vernier adjustable with fine screw and tangent thumb wheels. All in very good condition and contained in original mahogany case with 4 telescopes, a sighting tube and 2 eye piece sun filters. With trade label to inside case for George Lee & Son, Portsmouth.

The lid of the case has a split running across the lid and has a fitted brass escutcheon plate engraved, ‘C. J. Briggs. R.N.’, the case sits inside its original, rather tatty, protective leather case which is similarly embossed for C. J. Briggs, R.N.

Admiral Sir Charles John Briggs, K.C.B. was born 15th July 1858 and entered the Naval College in November 1871. He was promoted to rank of Lieutenant on 27th Feb 1879, Commander on 1st Jan 1892 and Captain on 22nd June 1897. He was in command of the battleship ‘Revenge’ in 1898 and H.M.S. ‘Vernon’ in 1904. He was promoted to the rank of Rear Admiral on 1st May 1907 in the First Division of the Home Fleet and on 20th Dec was appointed a Lord Commissioner of the Admiralty and Third Sea Lord and Contoller of the Navy. On 1st July 1912 he hoisted his flag in the battleship ‘Venerable’ as Acting Vice-Admiral Commanding the Fourth Squadron, the next day transferring his flag to ‘Exmouth’ and was confirmed Vice-Admiral on 13th July. On the Kings birthday he was appointed Knight Commander in the Military Division of the Most Honourable Order of the Bath (K.C.B.) on 13th June 1913. He was promoted to Admiral on 10th Jan 1916.

Edward Smith was a nautical instrument maker who worked from 11 America Square from 1875 – 1880. George Lee and Son, also instrument makers, had an established business from 1847 – 1912 and operated from The Hard, Portsmouth.

I do not always receive enquiries due to difficulties with my server so please feel free to contact me directly: compasschris@yahoo.co.uk