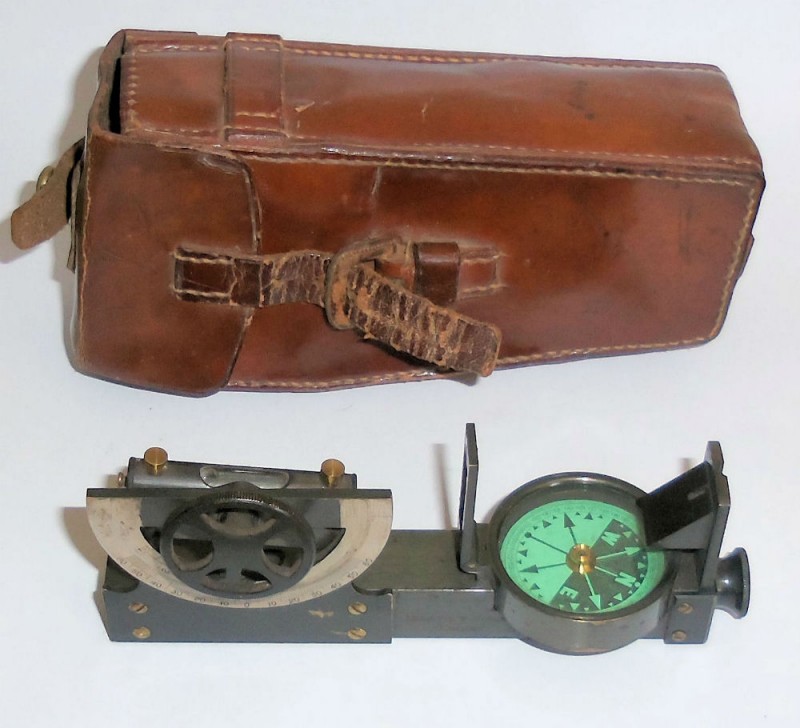 An interesting abney level / compass combination by ‘Negretti & Zambra, London’ in original leather case and perhaps more interesting, the provenance relating to its former owner. In fine working condition measuring 5″ (12.5cms) with 1.5″ floating green card compass, viewing prism and folding sight arm. Also engraved to the base, ‘Major H. Rowse Armstrong, R.E.’. Herbert Rowse Armstrong was enlisted into the army in 1914 and eventually gained the rank of Major in the Royal Engineers for long service. Locally known as Major Armstrong after the war, his wife Kitty, died in Feb 1921 after a series of mysterious illnesses. The Major operated as a solicitor in Hay-on Wye and invited his rival, Oswald Martin, another solicitor, to tea where Mr. Martin became violently sick. Oswald Martins father-in-law was the local chemist and remembered Major Armstrong purchasing large amounts of arsenic. Dr Hincks found arsenic in Martins urine and the Home Office was called in, the Major was arrested and Kitty Armstrong’s body exhumed where arsenic was found in her body. Major Armstrong was tried and sentenced to death for murder and attempted murder. He was the last solicitor to be hanged in England. More about the murdering Major here: http://en.wikipedia.org/wiki/Herbert_Rowse_Armstrong

I do not always receive enquiries due to difficulties with  my server so please feel free to contact me directly: compasschris@yahoo.co.uk