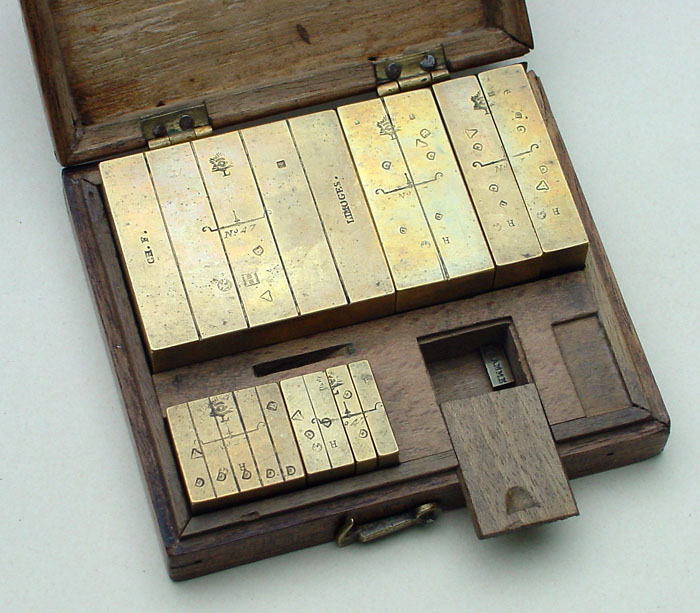 For sale, antique official subdivided elements of a kilogram. Each weight is well marked with its weight and standardization marks. Contained in its original fitted wood box.

OFFICIAL FRENCH STANDARD WEIGHTS — THE “PARALLELOPIPED KILOGRAM”, very early 19th century. Contained in its 4″ x 4-1/2″ x 1-1/8″ (10 x 11 x 3 cm) fitted wood box are the subdivided elements of a kilogram, specifically brass weights of 500, 200, 100, 50, 20, 10, and 1 gram. Each rectangular weight has an adjustment plug, and is marked with its weight value, plus a host of standardization marks, including variously an image of a balance beam, the number 47, the city (Limoges), the “all-seeing-eye” above an “L,” the letter “H,” a crowned eagle, and letter certifications running continuously (except no “J”) from A through K. Condition is very fine and complete but for tweezers and a few of the smallest weights (present are 991 out of the full 1000 grams). The “parallelopiped kilogram” was published by chemist Claude Antoine Prieur in 1797, in the Annales de Chimie. He devotes eight pages to their description and advantages, and recommends those made by Fortin. The weights could be purchased at the Bureau of Weights and Measures, on rue Dominique in Paris. The present set was made for official use in the town of Limoges, and bears certifications through the first quarter of the 18th century. Following Pommier (in recent issues of Le Systeme metrique), we find that for primary standards the balance beam mark was used 1801 – 1840, the crowned eagle 1808 – 1812, and the sequential year letters starting with A for 1802 (or a couple of years later in some of the provinces). A very rare survival, this is an important standard set from the early years of the metric system.