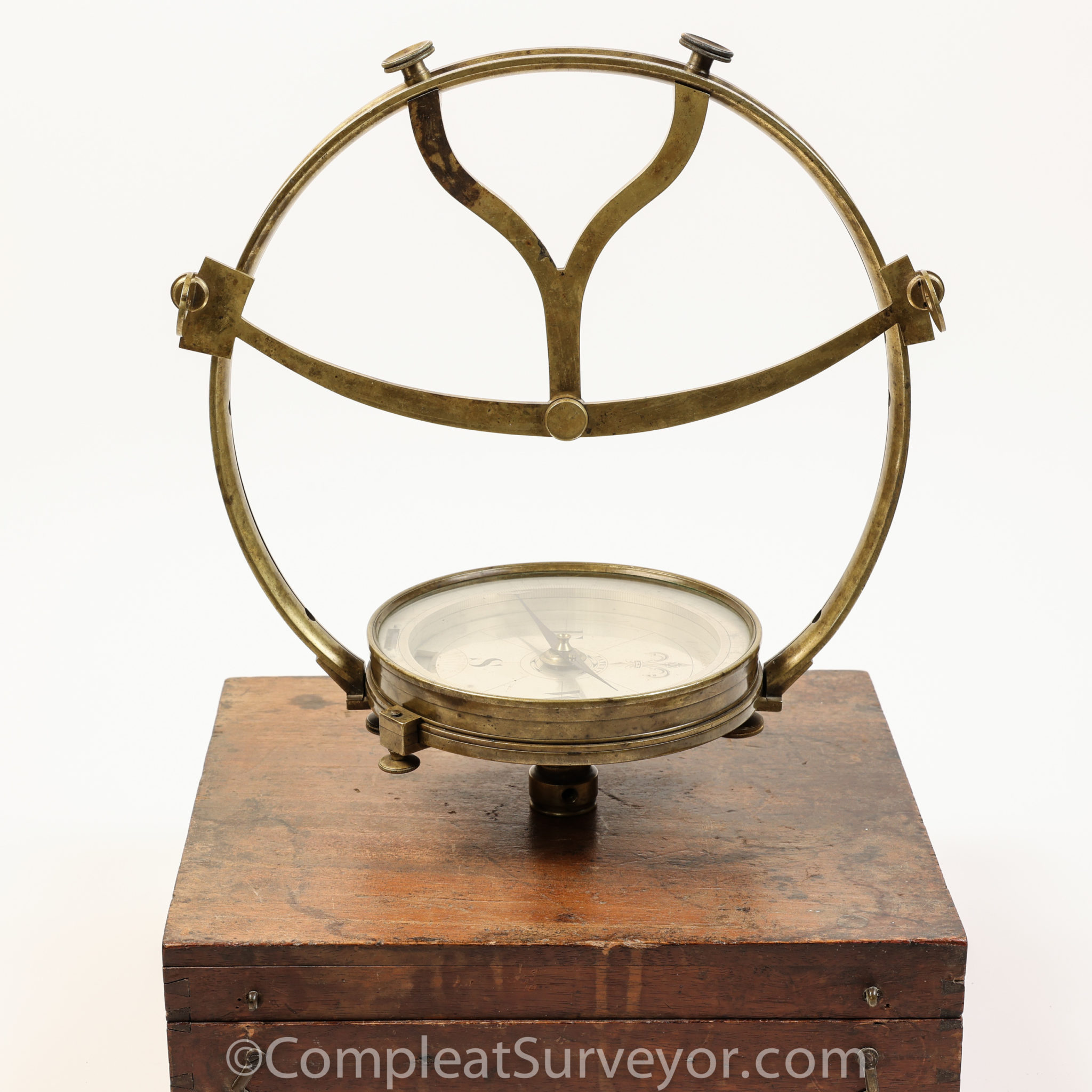 This is a beautiful Oscar Hanks Bow Compass. A uniquely American instrument and infrequently seen for sale, bow compasses are among the most collectible surveying instruments ever made. This bow compass is a wonderful example, with a known owner - a civil engineer who wrote letters to Abe Lincoln advising Lincoln to try end the civil war thru mediation.

There are very few truly American designed instruments; the bow instruments are unique to the patentee, Julius and his son Oscar Hanks, who manufactured instruments in Troy NY during the mid 19th century.

The silvered compass dial is signed by engraving, “O. Hanks Troy NY.” The instrument stands over an impressive 19″ tall on a lathe-turned stand. The bow is over 11″ in diameter and the needle is approximately 5.25″ in length. The button-weighted Hanks needle is a very unique form; the nonius or vernier that is affixed to the end of the needle allows for reading minutes, or portions of a degree.

The instrument is a Railroad or Improved form, where there are double plates and both the needle ring and and the lower plate are divided in 360 degrees. This allows for the recording of angles independent of the needle. The engraved compass plate has two imbedded bubble vials and an opening to expose the lower circle, adjacent to a bevel-cut with a vernier.  The original owner, Henry N Thielsen, was a civil engineer from about 1840 to 1860. I suspect Thielsen acquired the Hanks bow compass early in the 1840s. Thielsen has several minor non-surveying claims to fame. First, he wrote several times to Abe Lincoln urging Lincoln to try to end the civil war thru mediation, and the Library of Congress has preserved both of these letters.. A short two page letter to Abe is shown below.  A much longer 17 page letter from Thielsen to Abe can be found by clicking here.   Second, Henry N Thielsen was the younger brother of Hans (aka Henry) Theilsen, who was a rather famous railroad man in Oregon. If you research Henry N Thielsen online, keep in mind that there are multiple Henry Thielsen’s from the same family, especially sine Hans (aka Henry) Theilsen named his son Henry B Thielsen, and Henry B was a surveyor and railroad man as well.

Everything works on this compass, and the compass is in VERY nice condition. The compass, the original signed box, and the lathe-turned stand are included in the sale.  As indicated in the newspaper ad below, Hanks offered the bow compass with various option, and prices ranged from $40 to $100. The bow compass offered contained most of the options offered – including being able to measure angles independently of the needle (like a Railroad Compass) and a vernier attached to the end of the needle.  Skinner sold a Hanks Bow Compass for $14,760 in 2019, but the Skinner bow compass did not include those two very neat and useful features. The Skinner compass also did not have a box, and the original owner was unknown.

360 Degree Spinner View – with Zoom Option
(Zoom with your mouse scroll wheel or with the magnifying glass in the spinner menu bar. Unzoom to regain control of the 360 degree spinner).