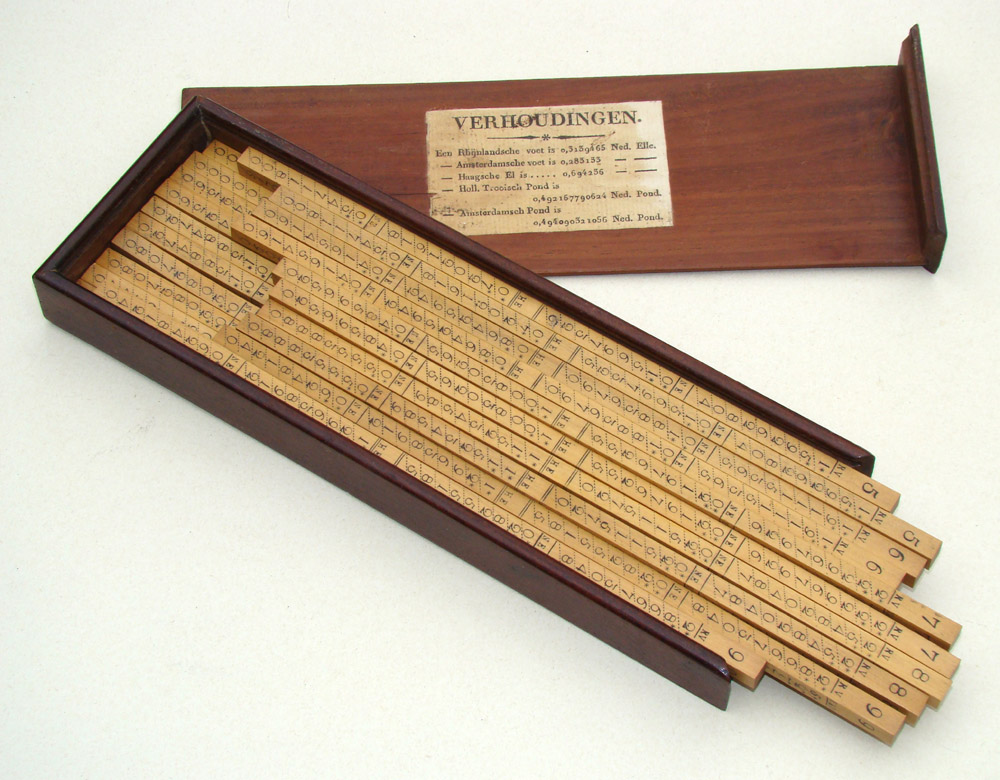 For sale, antique set of boxwood rods for size and weight conversion among different measurement equivalents used in the Netherlands in the early 19th century.

SPECIALIZED CALCULATING RODS — “NAPIER’S BONES” FOR SIZE AND WEIGHT CONVERSIONS, Dutch, c. 1800, with the partial trade label of “Dirk Van Den Bosch,” mathematical instrument maker of Rotterdam. The fine mahogany case contains this complete set of 20 four-sided, 8-3/8″ (21 cm) long, boxwood rods. Each rod is numbered on top with an integer from 0 to 9, and punched on each face with four sets of columns of nine numbers, each column headed by different lettered abbreviations. The latter are identified on a label in the case, being RV (Rheinland foot), AV (Amsterdam foot), HE (The Hague ell), HTP (Holland troy pound), AP (Amsterdam pound), NE (Netherlands ell), and NP (Netherlands pound). Further abbreviations have these letters preceded by V (for squares) or K (for cubes). In addition to the printed trade label and table of ratios (Verhoudingen) in the box, there is an old manuscript explanation written (in Dutch) by an early user. This note refers to van Swinden, the famous Dutch mathematician and physicist who wrote a major work on weights and measures, and was instrumental in bringing the metric system to the Netherlands. Condition is excellent noting some rods warped, and an old crack in the case lid.

This is the first such set we have encountered. In using it we find, for example, that one side of the “1” rod has columns for RV, NE, HE, and NE. The first column gives, to nine decimal places, the number of Rheinland feet in one Netherlands ell; the second column the reciprocal; the third the number of The Hague ells in one Netherlands ell; the fourth the reciprocal of that. The same face on the “2” rod has the same entries doubled, and so on to the “9” rod. Assembling a group of rods, and adding along the diagonals as with Napier’s rods, we find directly how many of one unit are in any very large number of the other unit of length, or weight. With the “V” and “K” scales we can do this direct conversion for areas and for volumes, respectively.

The maker / retailer of this ingenious set is not found in the standard references.