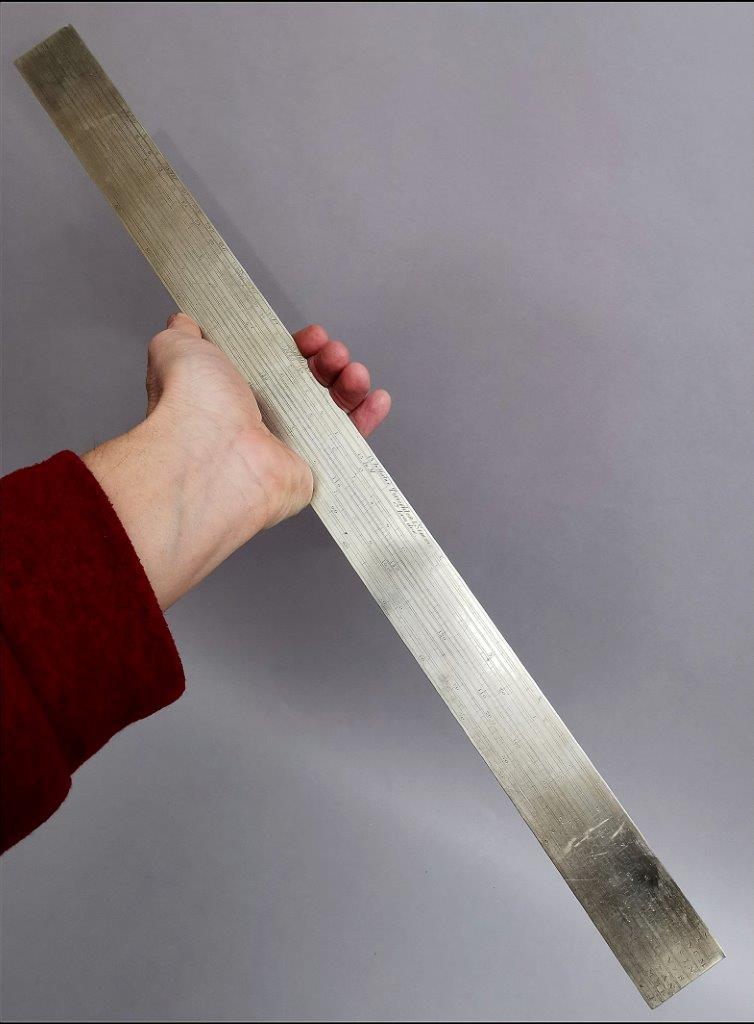 could be used for artillery calculation too. ”Guns & Diameter of Bore­­-Diameter of Shot & Shell- In Mortar”

English mathematician who invented many useful measuring devices, including a forerunner of the slide rule.      Gunter was professor of astronomy at Gresham College, London, from 1619 until his death 1626.                                               In 1620 Gunter invented the first analogue device that used Napier’s logarithms to perform calculations.                 Called Gunter’s Line of Proportion, or Gunter’s Rule, it is inscribed with a line marked at intervals such that the distance of a number from 1 represented its logarithm. Distances on the scale could be added using a pair of dividers to multiply two numbers, or subtracted to divide one number by another.

Troughton & Simms began in business in London in 1826. Edward Troughton (1756-1835) had learned the trade from his father, John Troughton, a leading instrument maker in London; he also worked with his equally talented brother, also named John. William Simms (1793-1860) had a less distinguished pedigree, but proved to be an excellent craftsman and businessman. Under his leadership, Troughton & Simms manufactured mathematical instruments both large and small, and attracted customers around the world.

Early industrialization, 1800-1900, Britain and in Europe, too, a new material was in common use by 1850 for the main range of metal drawing instruments, which was to replace silver or brass for quality instruments. In Britain this was to be known as ‘German silver’, also sometimes called ‘electrum’. This was due to its resemblance to the metal of that name; which was white gold and had been used in the Classical period of Antiquity. In Germany this new material was known as ‘Argentan’ or sometimes ‘Neusilber’. Both German silver and electrum consisted of a similar alloy of zinc, copper and nickel which provided a durable non-corrosive metal more suitable for high-quality drawing instruments than either sterling silver or brass. Elliott & Sons is known to have used this alloy by 1835 and Watkins & Hill, instrument makers of Charing Cross. refer to it in 1832 as a new white-metal not liable to tarnish and very suitable for damp and warm climates. Between 180o and 1900 there was a considerable increase in the range of drawing instruments produced in London, in small workshops producing by hand and a few larger workshops which gradually adopted the use of some machines and batch production for ‘off-the-peg’ instruments. During this period sets of spring bows, various patterns of folding and pocket compasses, compact beam compass fittings and individually cased proportional dividers, all capable of greater precision, were introduced. These, together with circle-dividing instruments such as protractors with hinged folding arms and pricking points and a full range of specialist ruling, became available as standard items. Some of the larger firms in existence in 1800 such as Wm. Elliott (from 1830 Elliott & Sons and later Elliott Bros), Troughton (from 1826 trading as Troughton & Simms).

For exhaustive  information about Gunter rules look  on this great work by :   Otto van Poelje – “Gunter Rules in Navigation” on Journal of the Oughtred Society

Feel free to ask for further details and information