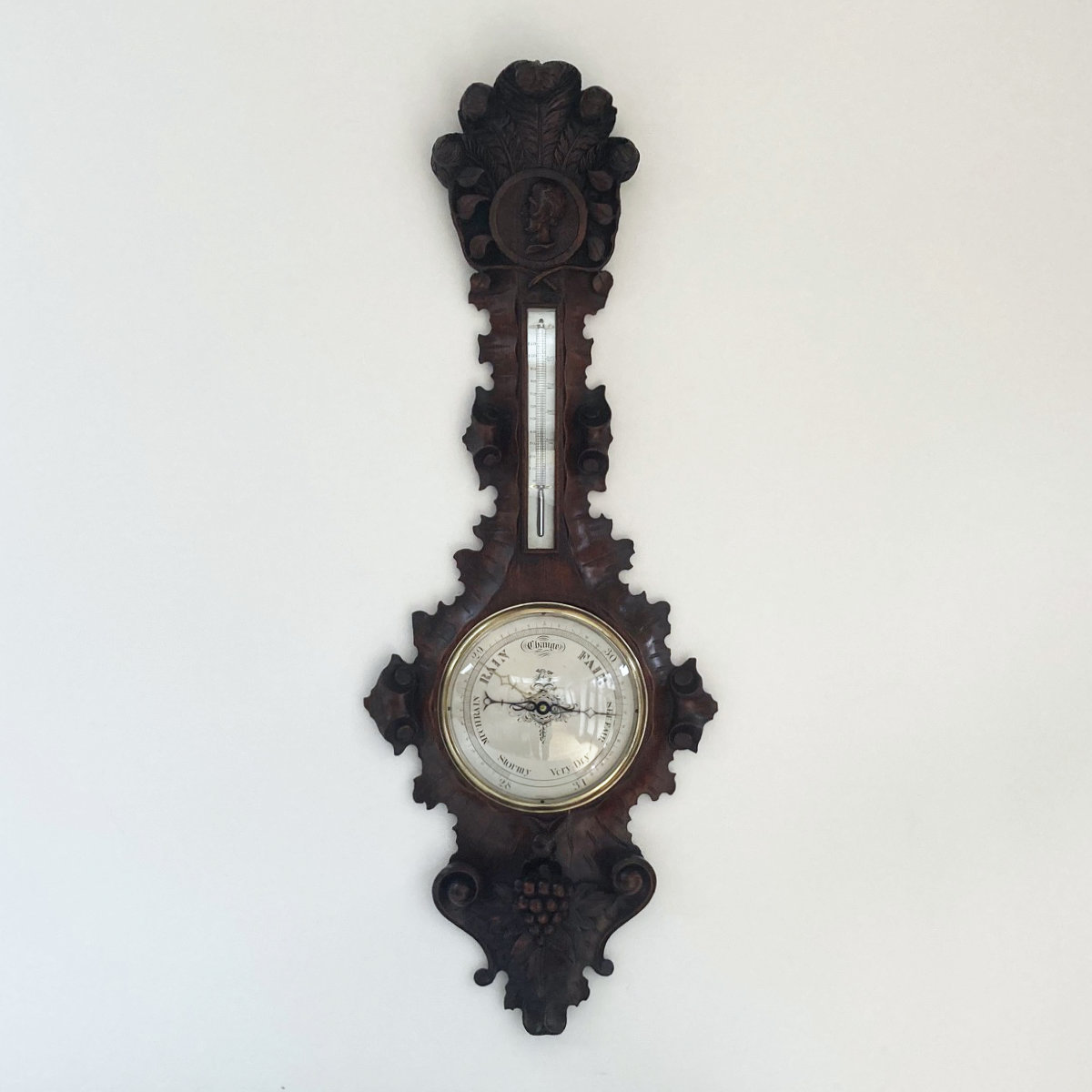 Victorian Wheel Barometer Commemorating the Life of the Duke of Wellington

Victorian Wheel Barometer Commemorating the Life of the Duke of Wellington

For sale, a highly unusual Victorian wheel barometer commemorating the death of The Duke of Wellington.

The body is comprised entirely from oak and lavishly carved throughout. The pediment of the barometer is peaked with five carved Royal ostrich feathers in emulation of those which graced Wellington’s Funeral Car. They surround a carved relief portrait medallion of Wellington himself with a leaf surround. The neck below is equally embellished with a Gothic stylised leaf surround which graduates out from the neck and with large scrollwork surmounting the Fahrenheit thermometer case to the centre.

The leaf scroll continues to surround an eight-inch silvered and engraved barometer dial measuring 28 to 31 inches of barometric pressure and with weather indications on the inner circumference. A lavish central engraving with floral motifs provides a superb background for the intricately worked blue steel pointer and brass set hand on the dial, all of which is encased behind a brass spun bezel with a convex glass front.

Similar carved scrollwork is provided on the outer case at the three and nine-o-clock positions of the dial and then the style follows to the base which is completed with two further scrolls surrounding a bunch of ripe grapes, presumably signifying the Christian afterlife. Above the grapes is a wooden set knob which operates the brass set hand on the dial.

The Duke of Wellington died on the 14th of September 1852 at Walmer Castle in Kent, the residence of The Lord of the Cinque Ports, his last formal post. Most famously known as a one of the greatest military leaders of all time for his leadership of the British Army in India against Tipu Sultan and later against Napoleon’s forces in The Peninsular Wars in Spain and Portugal which ultimately led to the famed victory of the British and Prussian forces on the fields of Waterloo over Napoleon’s Grand Armee.

After 1815, The Duke took up numerous public positions and rose to become Prime Minister under a Conservative Government. His political career was perhaps not quite so successful, but his unrivalled military achievements kept him at the forefront of public life for the remainder of his years. He was a close and trusted adviser to George IV, William IV and to Queen Victoria and his death was an enormous loss for the young monarch. After hearing the news, she is understood to have stated:

“He was the greatest man this country ever produced, and the most devoted and loyal subject, and the staunchest supporter the Crown ever had.”

After the Queen’s wishes, the body of The Duke was to be interred in St Pauls Cathedral and the arrangements were personally supervised by Prince Albert. The two-mile London procession eventually saw an estimated one million members of the public that showed up to pay their respects on the 18th of November 1852.

Commemorative barometers such as these are somewhat rare. Other gilt examples that celebrate Wellington’s battles or Nelson’s battles are known to exist, but this is the only one of this kind that I have ever come across, its dark colouration (rather than gilt) presumably intended to create a more sombre tone.

The Gothic leaf style is a rare design but does exist on some other extant examples, so I suspect an enterprising instrument maker saw the opportunity to adapt this design to mark the occasion.

A very unusual and historically interesting barometer which, given the subject, it is reasonable to assume was manufactured in 1852. An image of a sketch of the Duke in later years is provided in the images which I suspect was the one used by the carver for recreating the Duke’s profile.