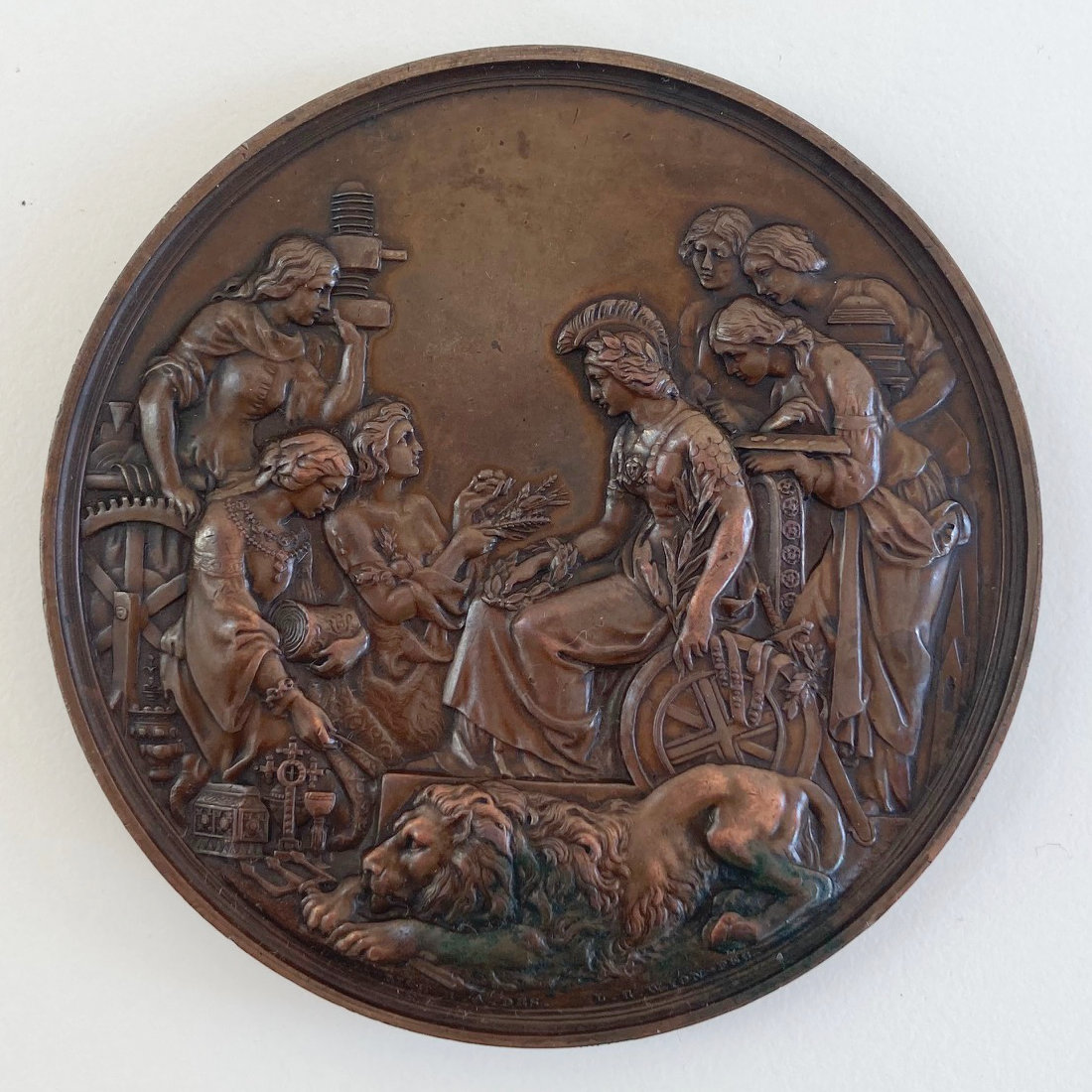 This superbly executed medal was awarded and individually engraved to each of the 1862 Exhibitors that were bestowed with a prize for their efforts.

Struck entirely from bronze, the obverse face shows Britannia seated with shield to her side and a sleeping lion at her feet. She is surrounded by six women each individually representing Industry, Agriculture and The Arts. The rim below the lion is marked with, D. Maclise R.A. DES. & Leonard C. Wyon FEC.

The reverse shows a wreath of oak running around the inner circumference with the words, 1862 Londini Honoris Causa which effectively translates to “London, a mark of esteem or respect” to the centre. In small letters to the base, the name of L.C. Wyon FEC is repeated.

The edge of the medal is further engraved to Carl Ranch. Class XV.

The International Exhibition was declared open by The Duke of Cambridge on the 1st of May 1862 in South Kensington on a site which is now occupied by The Natural History Museum. To give some idea of its scale, it featured nearly thirty thousand exhibitors from thirty six countries throughout the six months of its existence and welcomed over six million visitors.

This second exhibition was meant to follow up on the huge success of the 1851 Exhibition, originally intended to have been opened in 1861, it was delayed due to the Italian War of Independence, the Civil War in America and not least because of the death of Prince Albert, its Chief Patron and supporter. The latter reason is of course why Queen Victoria was not present at the delayed opening in 1862.

The building that housed the Exhibition was designed using brick and iron by the architect Captain Francis Fowke and contracted out to the firm of Kelk & Lucas. Sadly, Parliament declined the Government’s wishes to purchase the building after the Exhibition but the materials which were reclaimed were eventually put to use in the building of Alexandra Palace. Fowke was also responsible for proposing the building of The Natural history Museum which was eventually constructed in 1881 and remains on the site to this day.

The 1862 exhibition was Ranch’s second appearance on the Victorian exhibition stage, having already gained a medal at the 1855 Paris Exhibition where he cemented his reputation for the production of fine marine chronometers.

He was placed within Class XV – Horological Instruments and his prize according to the juror’s report for, “excellence in chronometers” was no simple undertaking when you consider the competition which included English clockmakers such as Dent, Bennett, Barraud & Lund, Parkinson & Frodsham and Breguet all of whom gained prizes at the event.

Almost all of the Victorian clockmaking exhibitors made great use of this medal’s image on letterheads, trade cards, catalogues and other associated ephemera and Ranch was no different, numerous examples of his chronometers have tradecards with reproduction medal images of the Paris, London and later, the Stockholm exhibition of 1866 and the Paris exhibitions of 1867 and 1878 where the company found equal success. To find an example of the original medal for a chronometer maker is extraordinarily rare.

Owing to his Danish heritage, detailed information about Ranch’s careers is somewhat hard to deduce but he was born in 1818 and entered an apprenticeship with Johan Peter Christian Christensen in 1832. His career from about 1840 to 1860 remains unclear but he was certainly successful enough to have gained a commissioned as chronometer maker to the Danish Royal Navy.

Ranch died in August of 1869 although the company continued under family ownership until at least the 1930’s.

A super example from a notable exhibitor of Class XV. Horological instrument makers of this standing are seldom encountered.