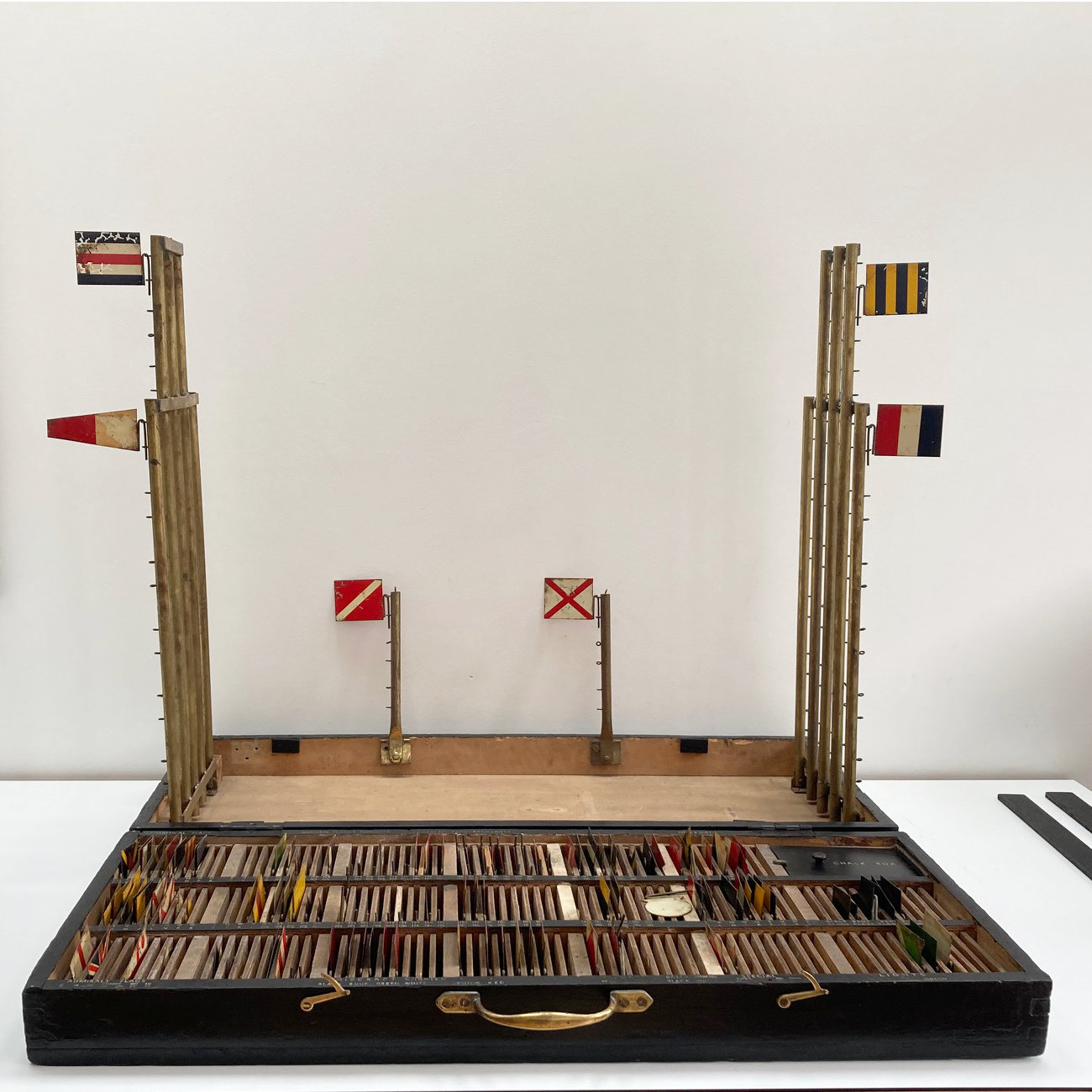 Encased in a large black painted pine case, the base is divided into numerous sections into which painted metal flags are stowed. The sections are ordered according to types of flag with a key provided to the top edges of the case. Sections include:

A large quantity of flags are included in the set although I am unable to confirm whether it retains a complete set owing to my lack of signalling skills (For those initiated in the art, please forgive any unintended offence I have caused by the signal I set up for the photographs…) but if you wish to discuss the collection in more detail, I would be very happy to assist.

The upper section when laid flat and open, provides a number of brass supports which can be erected to mimic two opposing ships masts. The trainees at either end would then be able to practice in pairs against their partner’s signals. These can then be returned to a flat position for storage when not in use.

Surprisingly little is written of Commander Lionel Tufnell’s signalling career. Born in 1857, he was promoted to Lieutenant in 1881 and then Flag Lieutenant to Rear Admiral Erskine off the Irish Coast in 1888. He reached the rank of Commander in 1895 and following initial interest by the US Navy was put in charge of experiments with the use of homing pigeons as a means of communication. In the same year, he was also given the responsibility of the Royal Navy Signal School upon HMS Victory and at Sheerness and Devonport.

Tufnell’s opportunity made him the first Superintendent of The Signal School, a post he held until 1898 during which time he invented this simple and very practical teaching aid dubbed thereafter as the Tufnell Box. Its use seems to have endured through the first half of the Twentieth Century and was a standard for Royal Navy recruits during successive World Wars.

Tufnell himself was promoted to Captain in 1901 and moved to the China Station in 1904. In 1910, he was appointed as temporary Commander of the Royal Naval Barracks at Devonport and promoted again to Rear Admiral in 1911. Having been placed on the retired list in the same year, he was appointed Commander in Chief of the Greek Naval Fleet where he was successful in modernising training and gunnery practices. He remained in Greece until 1913 and thereafter achieved both Vice Admiral and Admiral on the retired list.