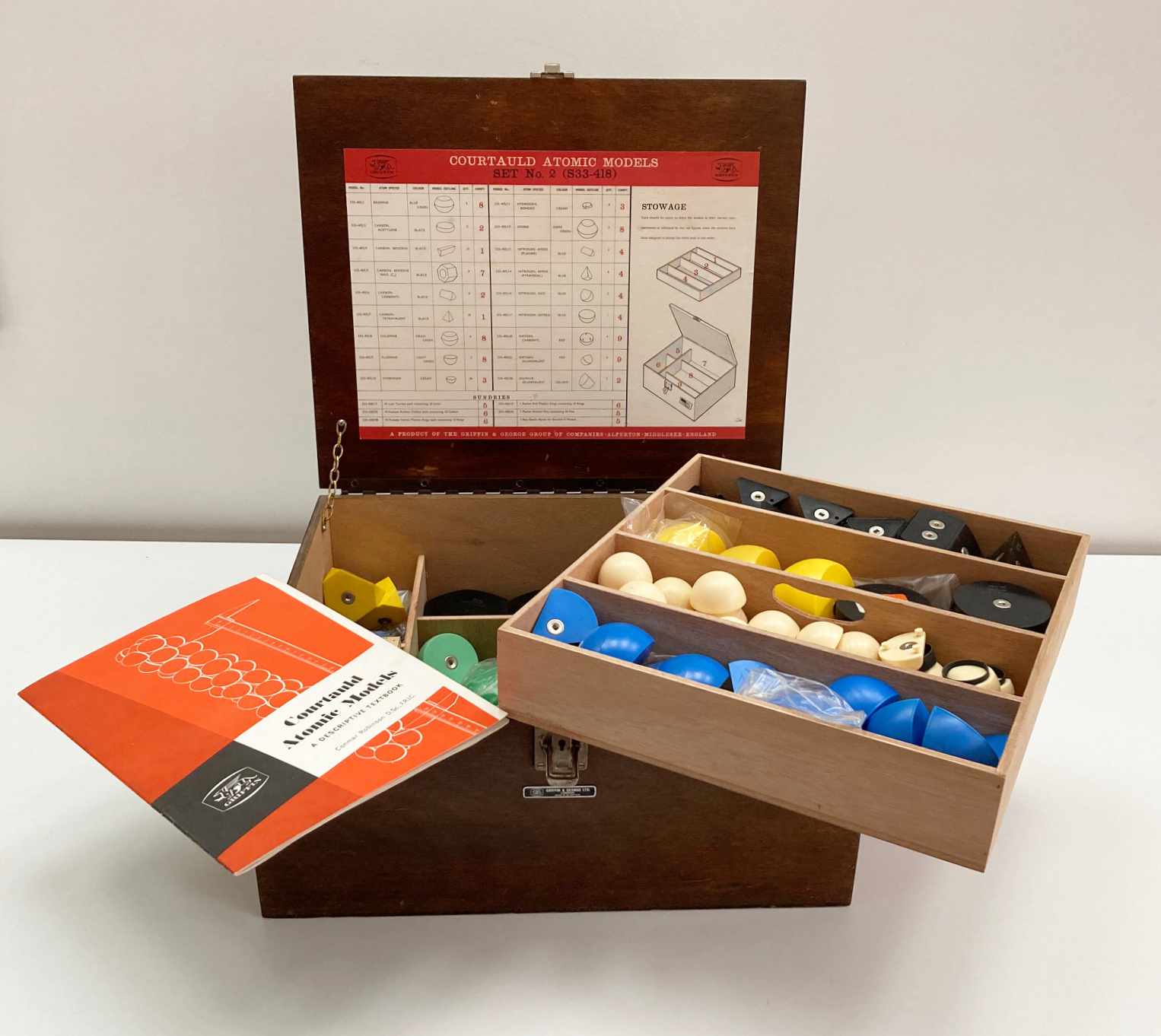 Space filling models such as these were first conceived in the mid 1930’s by HA Stuart as a means for representing the size and shape of a molecule better than the previously available. ball and spoke type. This popular student modelling set was designed by Dr GS Hartley of the Courtalds Ltd in 1952 and had colours  that differed from the standards set out by The Institute of Physics during the period. The reason for the change was a practical one, meaning that they were better differentiated when photographed in black and white.

The case’s contents can be checked for completeness using the key pasted to the inside of the lid and below is a list stating the original contents versus what remains. In some instances, the case contains more than the original intended quantity and in some cases a little less but overall this represents a largely complete set.

Contained within an oak case with sectioned interior and lift out tray. The contents have been divided according to the instructions on the lid. It also maintains its original instruction manual and Griffin & George name plate to the front of the case below the catch.

John J Griffin was an early supplier of chemistry apparatus but was also an accomplished chemist, publishing numerous books on the subject which helped to bring it to wider public attention. Brought up in Glasgow, the son of a publisher, his early career probably attuned him to the power of the written word and his education, contacts and personal scientific interests led him to set up an accompanying business selling chemistry apparatus during the 1830’s.

Shortly after, Griffin moved from Glasgow to London and by 1841 was renowned enough to be involved in the formation of The Chemical Society (now The Royal Society of Chemistry) and in 1851 was an exhibitor at The Great Exhbition. This growing success led to him to relinquish his interests in the family publishing firm and the proceeding two decades became his most prolific in terms of output, the company’s voluminous trade catalogue of 1866 is insightful in its sheer size and breadth of products. Sadly, it does not contain the set in question but it certainly relates the availability of rock and mineral hammers and also curated sets of minerals for purchase.

Griffin died in 1877 but his sons continued to successfully manage the business under the new title of John J Griffin & Sons into the early part of the Twentieth Century. It maintained its ties with Scotland throughout and in 1925, the company merged with the Glasgow arm of Baird & Tatlock to become Griffin and Tatlock until 1929 where it merged again with the firms W&J George & Becker and Stanley Belcher & Mason to finally become Griffin & George Limited. It survived until the end of the Twentieth Century in that form supplying scientific teaching apparatus.

Owing to the accompanying publication within the case, we can confidently date this wonderful set to the mid Sixties.