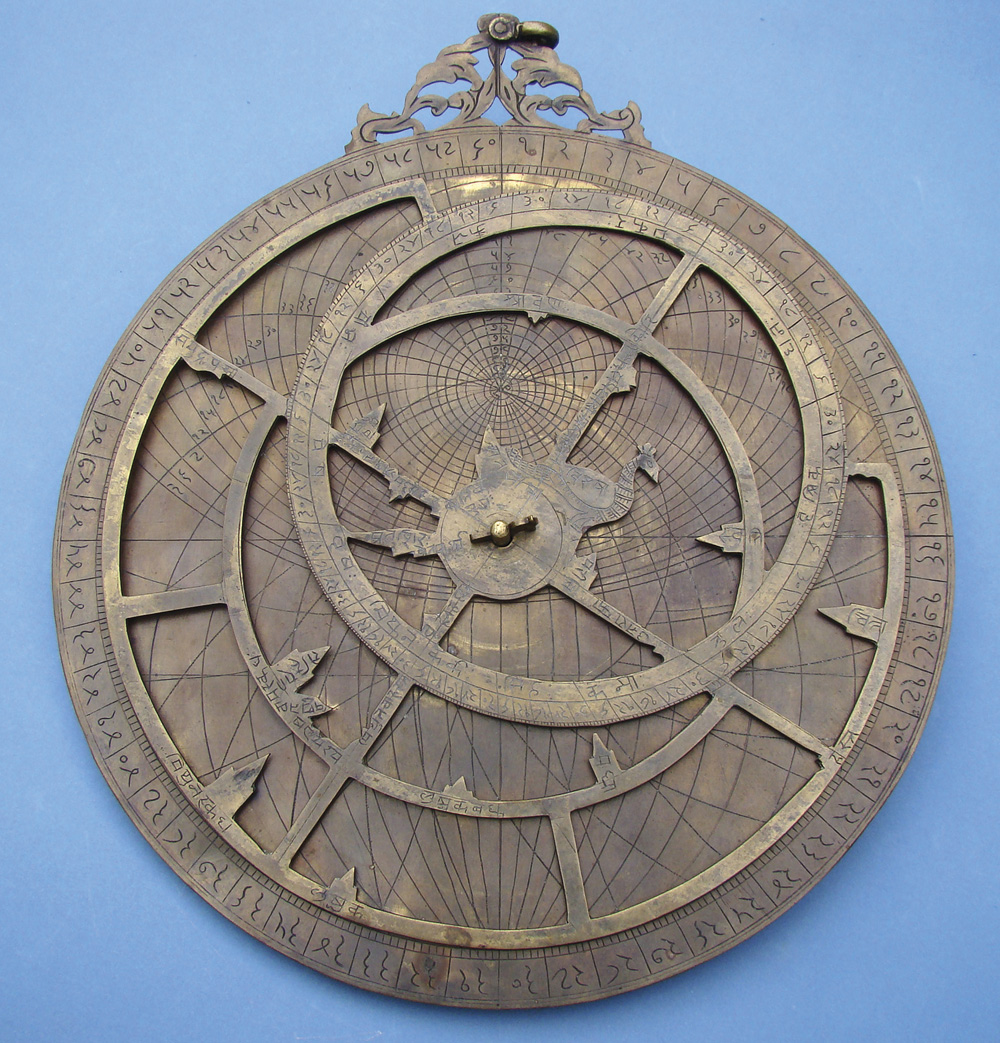 For sale, an elegant and interesting c. mid-19th century Indian astrolabe, signed for both for the astronomer who designed it and the craftsman who made it. It was likely made in Rajasthan, with a coordinate system of approximately 28° N latitude.

ELEGANT BRASS ASTROLABE, signed for the astronomer who designed it and for the craftsman who made it, Indian, c. mid-19th century. The main plate measures 10-3/4″ (27.4 cm) in overall diameter, hand-engraved on the front with the coordinate system for a user at latitude approximately 28 degrees north. The astrolabe was likely crafted in Rajasthan, possibly in the important city of Bikaner at latitude 28.01 degrees. Around the projection is a circumferential scale divided every degree and labeled every six degrees. The integral “throne” is nicely pierced and engraved in foliate patterns, and mounted with suspension swivel; the rounded edges in the throne give it an almost three-dimensional shape. The openwork rete, which presents a map of the heavens, rotates on the main plate, and is designed with 27 different mostly dagger-shaped star pointers, all labeled with the appropriate star names. The pointer for Alpha Coronae Borealis (Alphecca) however, is formed as a large peacock perched on the rete¹s central disk, and finely modeled with raised neck and with feather decoration.

The reverse is engraved with a sine/cosine grid, and with a double shadow square labeled on the left “shadows of a gnomon of 12 digits,” and on the right “shadows of a gnomon of 7 digits.” Below this the inscription reads “Latitude 28.16 [degrees]” and “Midday equinoctial shadow 6.30 [digits].” And finally comes: “This plate was made by Sutradhara Suryamalla according to the instructions of Kasturicandra.” Sutradhara means architect, here used in the sense of craftsman or artisan; the maker’s last name means literally “sun-wrestler.” Two other astrolabes by Suryamalla are known, also made under the instruction of the astronomer named Kasturicandra, and bearing the same distinctive peacock motif. (Sarma, personal communication).

The back of the astrolabe is mounted with the sighting tube/alidade, which has a nicely shaped center and a beveled edge divided both sides of the center (with equally spaced divisions, approximately 54 on one side of the shaped center, 58 on the other, and thus approximately two millimeters per division). All is held together by a central pin secured by a charming little stylized-horse-shaped “horse.” Condition is very fine throughout, the brass with a uniform brown patina. A fine example of an authentic functioning astrolabe, signed for both the maker and designer.