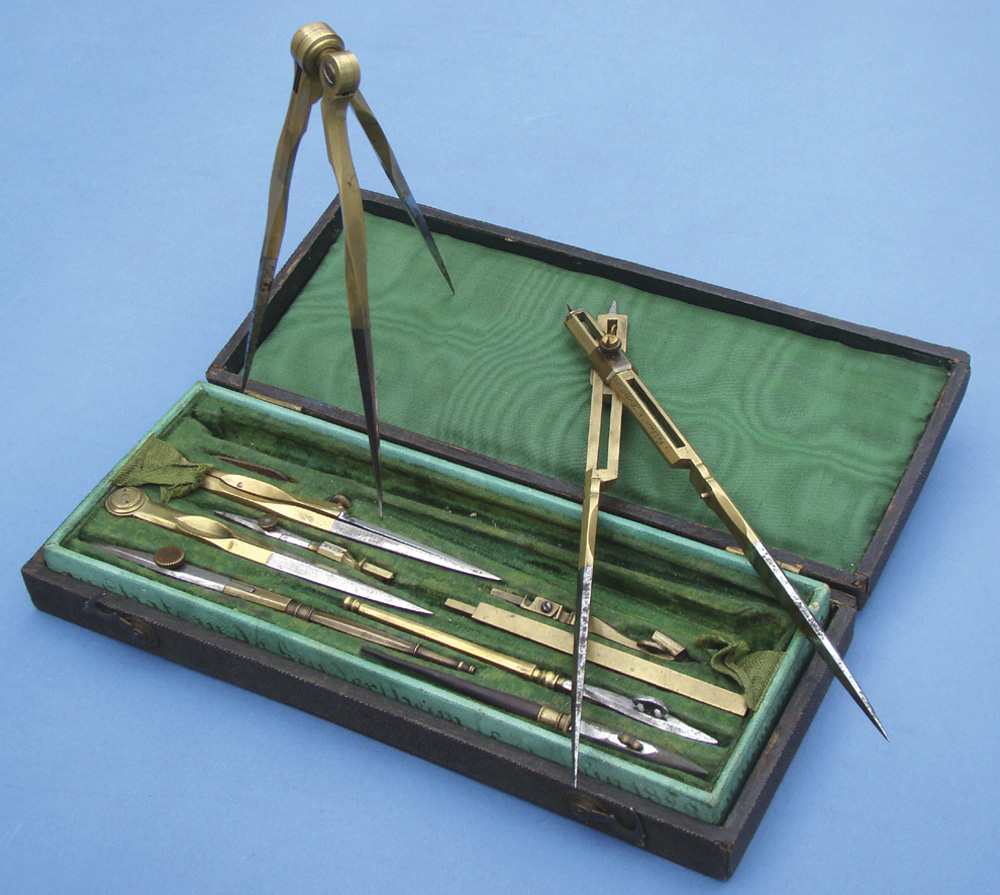 FOR SALE: Antique drafting set by Fahlmer and Diebolt of Strasbourg, contained in a wooden case, complete with 11 brass and steel instruments, late 18th century, with an important provenance for the owner Baron Alexis Balthazar Henri de Schauenburg.

GOOD DRAFTING SET WITH PROVENANCE, French, c. 1790.  Contained in the very fine 9” (23 cm) wide fishskin-covered wood case is a set of eleven brass and steel instruments and fittings, all in removable fitted tray.  The largest one, a splendid eight-sided adjustable proportional dividers with a scale of “Parties Egales” is beautifully signed “Fahlmer & Diebolt à Strasbourg.”  There is a finely shaped set of three-legged dividers, plus fixed leg and interchangeable leg dividers, ruling pens, etc.  A couple of the minor instruments might be replacements.  Overall condition is fine to very fine, with some oxidation to the steel.

The makers are known for various finely crafted surveying instruments, constructed by their partnership in Strasbourg (in Alsace in the east of France).  They apparently associated in the early 1780’s, and by 1798 had become “Fahlmer, Diebolt & Esser.”  But principal interest lies in an ink inscription running around the four sides of the tray “Le General de divi’on B’on de Shauenburg, au Capit’ne Girardau Chateau de Geudertheim le 21 Juin 1828. en memoire de Ch’s.”   It seems that Alexis Balthazar Henri de Schauenburg had a life of distinguished military service, serving during the wars of the Revolution and the Empire, with important roles in the Rhine and Moselle and in the invasion of the Swiss Confederation, rising through the ranks to become “général de division” in 1793.  He rose to the level of Baron in 1810, and constructed his own chateau at Geudertheim.  His name appears on the Arc de Triomphe in Paris.$4950.