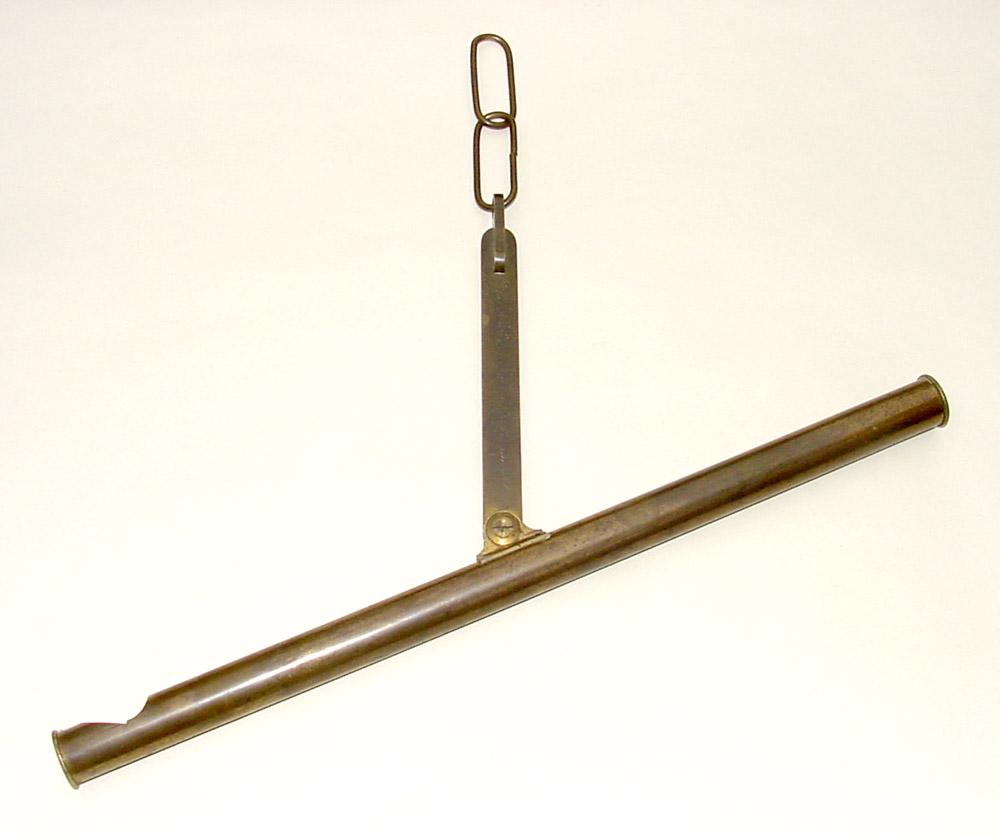 For sale is an antique 19th century astronomical balance made by Henri Robert, prolific watch and clock maker and inventor. It is a 20" (51 cm) tube, suspended by two large chain links. Aligning with the sun provides accurate time.

HENRI ROBERT’S ASTRONOMICAL BALANCE, French, c. 1835, signed “henry ROBERT, horloger a Paris. invenit.” The “balance” is constructed with a 20″ (51 cm) long lacquered brass tube fitted to a flat brass suspension bar and two large brass chain links. When suspended, the whole can rotate about the zenith direction, and the tube can pivot in its vertical plane. The tube itself is fitted with a tiny lens and pinhole at one end, and a removable target at the other. The target is inscribed with a grid of lines identified by dot patterns, and is inclined to the optical axis, and visible through a cut in the side of the tube. Condition is fine and complete, retaining about half the original lacquer finish.

Henri Robert (1795 – 1874) was a clock-and-watch maker and prolific inventor. He worked with Breguet, establishing his own business in 1832, and became “Clockmaker to the Marine” as well as “Clockmaker to the Queen.” This is his astronomical balance, by which one can determine the error in a watch or clock with high precision, simply by observing the sun (see Archives des Découvertes et des Inventions Nouvelles…pendant l¹année 1833). One suspends the balance in sunlight sometime before noon, aligns it with the sun, and, using the watch or clock in question, notes the exact times that the spot of sunlight crosses the lines on the target (as the sun ascends in elevation as it approaches the maximum at noon). One again notes the exact times that the same lines are crossed after noon. An average of the times should be 12:00:00 noon — if not, one resets the watch by the difference. The maker / inventor offered the apparatus in two sizes, this one the larger and more accurate, giving time corrections to five seconds. This is a remarkable survival, complete even with the original suspension chain links. We are aware of only one other example of Robert’s invention, that in the smaller version (Orologi e strumenti della Collezione Beltrame, 1996). (Featured in “Wondrous Devices” exhibition, Hudson River Museum, 2018).