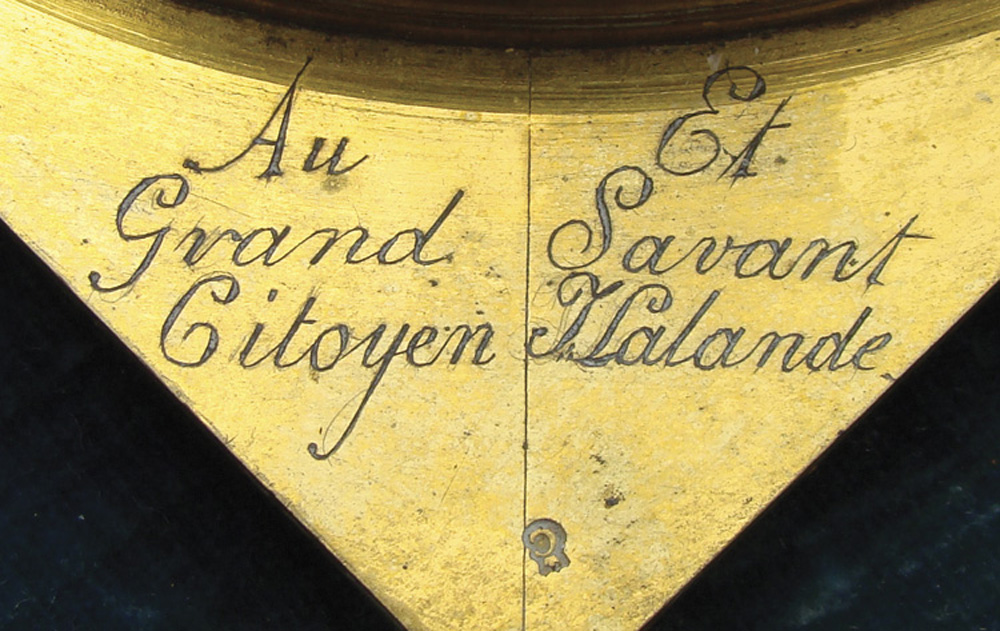 French c. 1745 compass signed by the maker and with a presentation and 'Crowned-C."

IMPORTANT GILT-BRASS REVOLUTIONARY COMPASS, French, c. 1745 -1747, finely signed by the maker “Lordelle A Paris à la Sphère,” and in a presentation “Au Grand Citoyen Et Savant J. Lalande,” and with a “crowned-C” hallmark. This finely crafted gilt brass compass measures 4-3/4″ (12 cm) on a side, mounted with glazed compass featuring hand-engraved 16-point rose (labeled interestingly NORT.EST, SEST, SUDEST, SUDO, ONO, etc.), circumferential twice-180° scale, elegant “arrow” needle, and external needle lifter. The North point fleur-de-lys has been dramatically re-engraved as a bold Phrygian cap, the “bonnet rouge” of France, representing loyalty to the revolutionaries revolting against the nobility and establishment. (Display of the Royal fleur-de-lys could be dangerous at the time, and the “liberty cap” was a much safer symbol from 1790 onwards. We note one other such re-engraved object, the compass of a Butterfield-type sundial listed in Tesseract Catalogue 41, as Item 22.) Condition of the present instrument is very fine. The case lid is missing, but the bottom is most elegant, of wood covered in fine green shagreen and lined in green velvet.

The maker was Jean Baptiste Lordelle, who became master founder in 1737, and died in 1747; he was nephew of Langlois and cousin of Canivet (who took over Lordelle’s trade sign in 1747). He is known for several interesting mathematical instruments, including a universal ring dial provenanced to la Condamine (the great French explorer) in 1735. We have had one other object by him, that a fine ring dial (Tesseract Catalogue 87 Item12).

The “crowned-C” poinçon was used for only four years (1745 – 1749), and indicated a tax paid on copper alloys. Thus we can reliably date the production of this compass to a two-year period.

The recipient was the leading French astronomer Joseph-Jérôme Lefrançais de Lalande (1732 – 1807), father of modern positional astronomy, editor of the astronomical almanac Conaissance des temps (from 1760), elected head of the Collège de France (1791), appointed director of the Paris Observatory (1795), created a catalogue of 47,000 stars (1801), notable freemason, proclaimed atheist, traveler, popularizer of astronomy, and extensive writer. He safely transited the Reign of Terror and its consequences, even changing his name at the time of the Revolution, from the aristocratic “de la Lande” to simply “Lalande.” The present compass demonstrates such political correctness, with its Phrygian symbol and inscription to the “great Citizen and Scholar.” We suggest that the cap and the presentation were both engraved in those years, perhaps at the moment of Lalande’s ascension to a directorship. An important survival with very special connections.