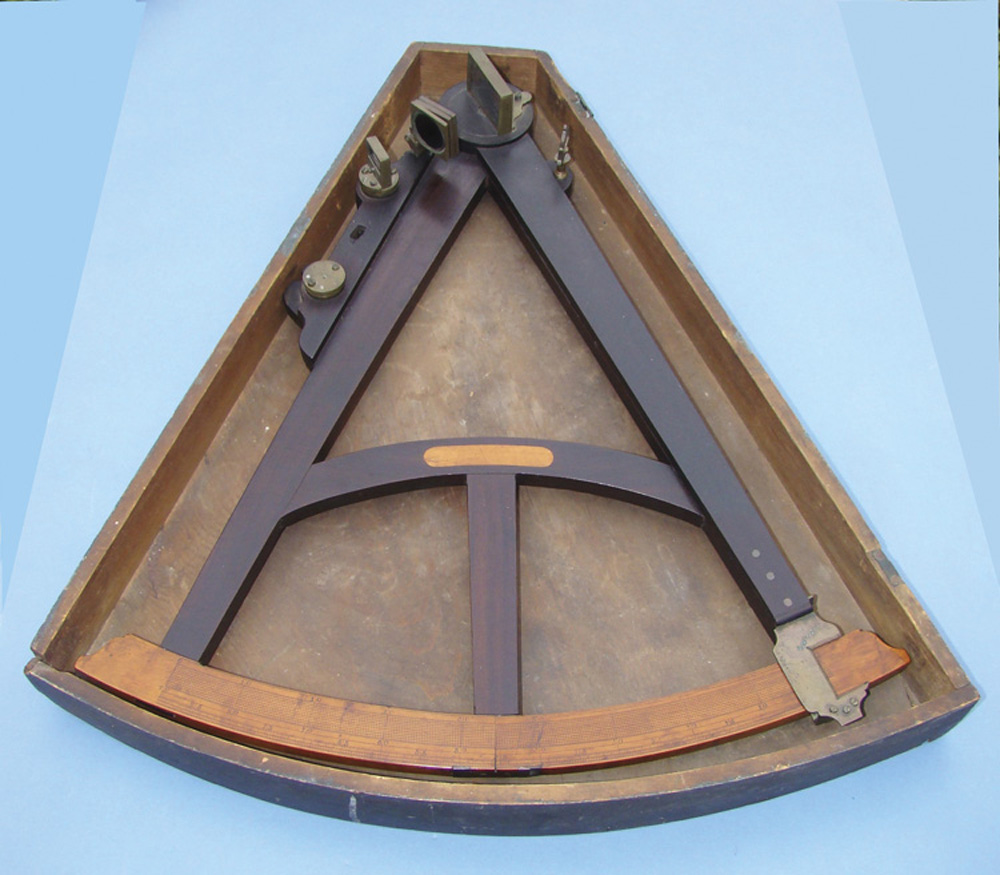 For sale, large antique mahogany or rosewood octant with boxwood scale. Dating from the mid-18th century, this instrument bears similarities to the work of John Dupee of Boston, as well as to Benjamin Cole and John Gilbert instruments. A very early survival.

LARGE EARLY OCTANT WITH SOLID BOXWOOD SCALE ARM, American or English, c.1750-1760. Framed in mahogany (or rosewood), with boxwood scale arm 1/2″ thick, the octant measures 20″ (51 cm) overall. It is equipped with wooden index arm ending in brass “line of faith” reading against transversal scale, and inset blank name plate of boxwood. There are two mirrors, set of three filters (one cracked) interchangeable between horizon and index positions, double peep with pivoting cover, and remains of the backsight assembly. On the reverse are fine brass assemblies for adjustment of horizon and backsight mirror mounts, plus pegged wood feet, this a very early form. The shaped boxwood scale arm (reminiscent of that of a backstaff) is spliced in the center, divided 0° to 90° by thirds, with transversal scale reading to two arcminutes, and zenith distance scale running in reverse. Condition of the instrument is generally fine, noting some chips to the wood frame, and one replaced screw. Included is the lower half of the shaped case.

Construction and layout are very similar to two octants in the Peabody Museum Collection (M1034 and M9270), one of those signed in 1755 by John Dupee (b.1729), important early American instrument maker of Boston. The present octant may well be one one of the very earliest surviving American examples (see D. Warner’s inventory in Rittenhouse 3, pp. 89-112). Alternatively, we find similarities to early period English octants, in particular with inclusion of the zenith distance scale found so often on Benjamin Cole’s instruments (and see that by John Gilbert, Item 24 in Tesseract Catalogue 61).