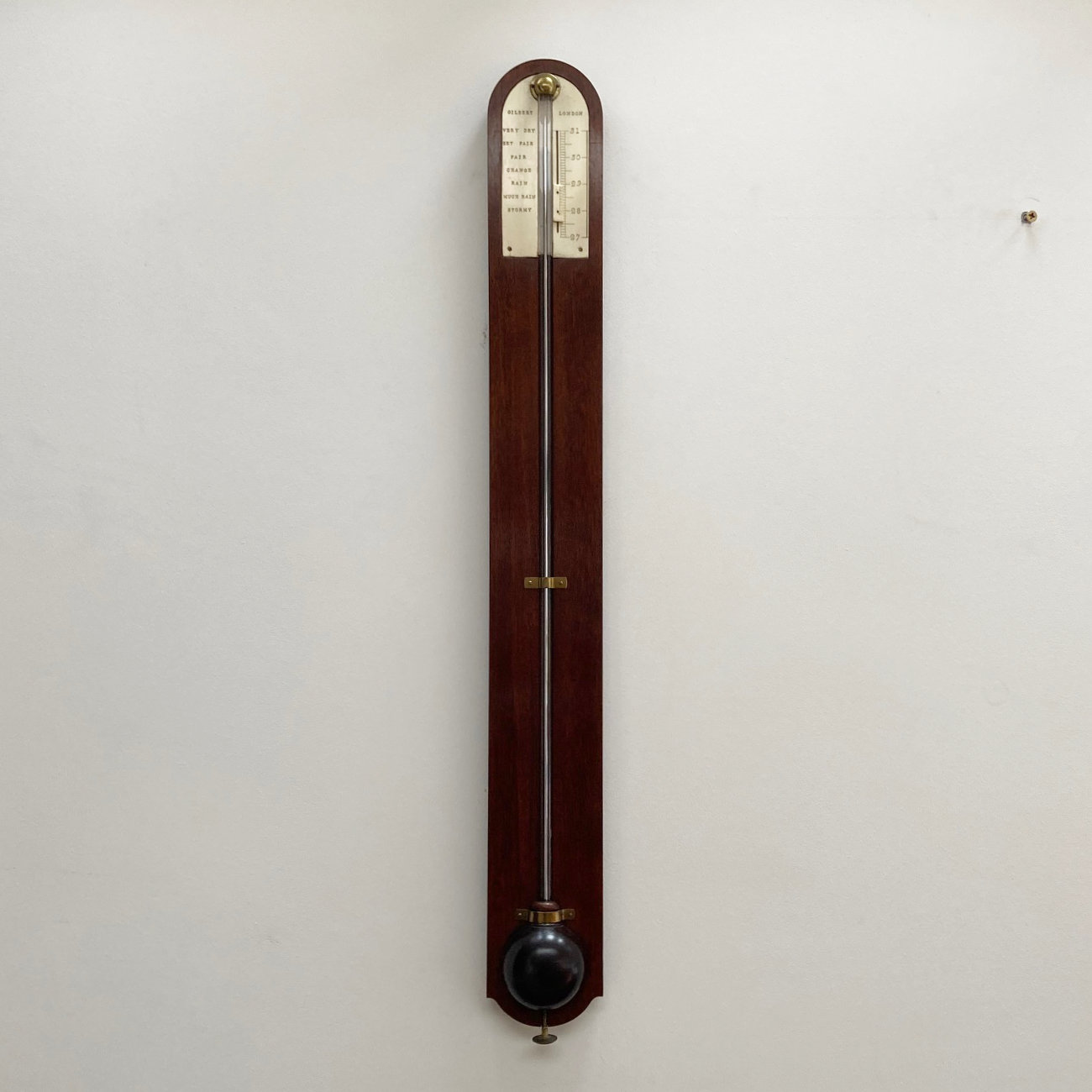 For sale, a Late Eighteenth Century Mahogany Stick Barometer by Gilbert of London.

A simply designed yet beautifully robust example comprised of a solid mahogany backboard with domed top and base. The inset bone scale plate is engraved with weather indications to the left and and a scale to the right measuring 27 to 31 inches of barometric pressure with a sliding Vernier incorporated for fine measurement. The head of the scale is simply engraved with the maker’s name of Gilbert, London to the top and a brass dome above to secure the head of the barometer tube.

The exposed barometer tube runs the full length of the body into a half globe mahogany cistern cover with brass travel screw protruding underneath.

During the eighteenth and early nineteenth centuries, the Gilbert family of Tower Hill carried a huge reputation, rivalling that of the Dollond and Ramsden for their skill of manufacture. The first family member to come to prominence as a scientific instrument maker was John Gilbert Snr. After beginning an apprenticeship in 1709 with a John Johnson he began trading after the customary seven years in 1716, entering the Company of Grocers. In 1726, he is referred to by the scientist, John Peter Biester as the chosen maker for his “Portatoris”, an instrument intended to solve the issue of longitude by observing the moon’s distance from a known star as it crossed the meridian. Clearly the device was not ultimately successful for Biester but he was confident enough to show his work to Isaac Newton and The Royal Society which should give you a flavour of the circles in which the elder John Gilbert was already moving.

Amongst a number of apprentices, his son John Gilbert the younger was enrolled in 1736 and following his eventual freedom in the early 1740’s, the family traded as Gilbert & Son and notably acquired the sole rights to manufacture and sell John Hadley’s hugely popular patent reflecting quadrant. The elder Gilbert’s date of death is not recorded but he became a member of the Livery of the Grocer’s Company in 1749 alongside notable instrument makers Thomas Heath and the hugely renowned George Adams of Fleet Street.

It seems fairly certain that the younger was trading under his own name by the 1750’s and he maintained a number of apprentices including his sons John (III) in 1764 and his second son William in 1769 although the latter was soon turned over to Peter Dollond, an enormously shrewd move on Gilbert’s part given the Dollond family’s recent patenting of the achromatic lens. Records show that by 1764, Gilbert was one of the few instrument makers that was given the rights to sell the achromatic lens by the Dollond family and William’s apprenticeship may have been a positive gesture by the Dollonds for the continued support and loyalty shown by Gilbert during the various famous legal issues that endured over the patent throughout this period.

Both of John (II) sons went on to have successful careers. The elder brother John (III) succeeded to the business of Joseph Linnell, a business that was originally founded by the great James Ayscough. William eventually succeeded to his Father’s business around 1776 after receiving his freedom from the Dollonds and continued to trade solely under the Gilbert name until his Father’s death in 1791 whereupon he departed on a number of complicated partnerships for the next ten years. By this point the business seems to have interests in properties at 8 Postern Row next to The Tower of London and at a new property at The Navigation Warehouse, 148 Leadenhall Street (now The Argyll Club opposite Lloyd’s of London), and originally home to the partners Gregory and Wright.

His first venture was the partnership of Gilbert & Wright. Gabriel Wright was an employee of the famous author and instrument maker, Benjamin Martin until his employer’s bankruptcy and subsequent suicide in 1782. He had previously patented improvements to compasses and quadrants in 1779 so must have worked with a level of autonomy, inventing a new universal equatorial sundial and eventually advertising in 1782 requesting the continued patronage of Martin’s old customer base. Probably due to the cost of starting his own concern, Wright joined forces with the London instrument maker, Henry Gregory, (the business famous for supplying his azimuth compass to Captain James Cook) and the pair traded as Gregory & Wright, advertising the sale of spectacles to Martin’s specifications. They also republished Martin’s works on microscopes and globes, the latter coinciding with the release of a new pair of twelve inch globes produced alongside the world famous globe-maker William Bardin. They were of course not the only instrument makers to benefit from Martin’s demise, W&S Jones and Charles Tulley both acquired publications or tools from his estate.

William Gilbert certainly became involved with Gabriel Wright in 1790 probably owing to the death of his Father and business partner. Both parties had significant pedigrees but it is unclear whether Wright’s former partner, Henry Gregory (II) was involved in the new business venture although there are indications that John Gilbert (II), William’s Father and Henry Gregory (I) had some earlier trade associations. Some literature suggests that Gilbert was involved with the pair and even that Gilbert was involved in a partnership solely with Gregory however I can find no immediate examples of Gilbert and Gregory’s names attached to any existing instruments. Nevertheless, the business flourished and Gilbert’s instruments were used alongside Ramsden, Adams, Dollond and Troughton instruments during Captain George Vancouver’s expedition to Canada between 1791 – 1795.

Gabriel Wright had taken on a single apprentice in 1786 during his previous partnership with Gregory and by 1793 it should be presumed that Benjamin Hooke had completed his training as his name appeared next to that of Gilbert and Wright trading from Leadenhall Street until about 1800. In the same year (1793) it is also recorded that Gilbert formed another partnership with James Gilkerson which traded from both Postern Row and Leadenhall Street and which remained intact until 1809.

William Gilbert had also during this time taken on his four sons (William (II), Henry, Thomas & Charles) as apprentices and it is likely that the completion of his first son William’s (II) training in circa 1802 urged him to return to using the sole Gilbert name again. For a short period the name Gilbert & Co was used and by 1806, the business had been renamed Gilbert & Sons to incorporate both William (II) and Thomas Gilbert.

Note: This busy and somewhat confusing period of the Gilbert family history is ripe for more interrogation, specifically into the character and the activities of those instrument makers that worked from Postern Row and Leadenhall Street at the turn of the century. It is clear from extant examples of their work that all of these companies existed during this period but how the relationship worked in practice is at this point unknown. What is clear is that William Gilbert was the only partner that stemmed across all of these business concerns. How he circumnavigated the relationships with all of these equally capable instrument makers would make an interested piece of dedicated research. Gilbert also maintained close relationships with the Dollond and the Ramsden families and the Gilbert family’s visits to their properties are noted around this time. It is clear that like his Father and Grandfather before him, he was operating at the upper echelons of the trade.

The name of Gilbert & Sons traded from 1806 until 1819 during which time this superbly crafted telescope was manufactured. It is likely that the death of the elder William Gilbert marked the change of the family business name to W&T Gilbert around this time but it maintained its reputation by being appointed as the main supplier of instruments to the East India Company and garnered strong relations with Peter Barlow (Professor of Mathematics at the Woolwich Academy), going on to produce his “Barlow’s plate” an instrument which corrected magnetic deviation aboard ships and conducted experiments with him on a new fluid refracting telescope. They were also appointed to supply The Admiralty and numerous marine surveying commissions ensued but it is also likely that the pressures of doing business with such large organisations gave birth to issues of cash flow concluding in 1828 with the firm’s bankruptcy, a common occurrence for such small and specialist organisation of the period. Both Thomas Tyrell (related by marriage to the Dollond family) and Robert Brettell Bate are both listed as creditors during this time suggesting that the Gilbert family were not only farming out work to other high profile instrument makers but were also relying on their personal relationships to buoy up the business during this time. It is interesting to note that the latterly famous Andrew Ross also began his career with the Gilbert firm in 1823, rising to become their works foreman in 1827 and leaving a few years after to form his own company.

Sadly as is often the case, the Gilbert family dynasty did not recover well from this financial shock. The business seems to have somehow continued trading throughout the 1830s with Thomas leaving the business to his older brother William Gilbert (II). In sole charge, he maintained the company’s position with the East India Company although was eventually struck off their lists in 1838 and replaced by Troughton & Simms.

The final years of the Gilbert Company beyond 1838 remain undocumented but it continued to trade until at least 1845 whereupon it ceased to exist. William Gilbert would have been in his sixties by this point so it is reasonable to assume that his death marked the end of a dynasty that had lasted for one hundred and thirty five years.