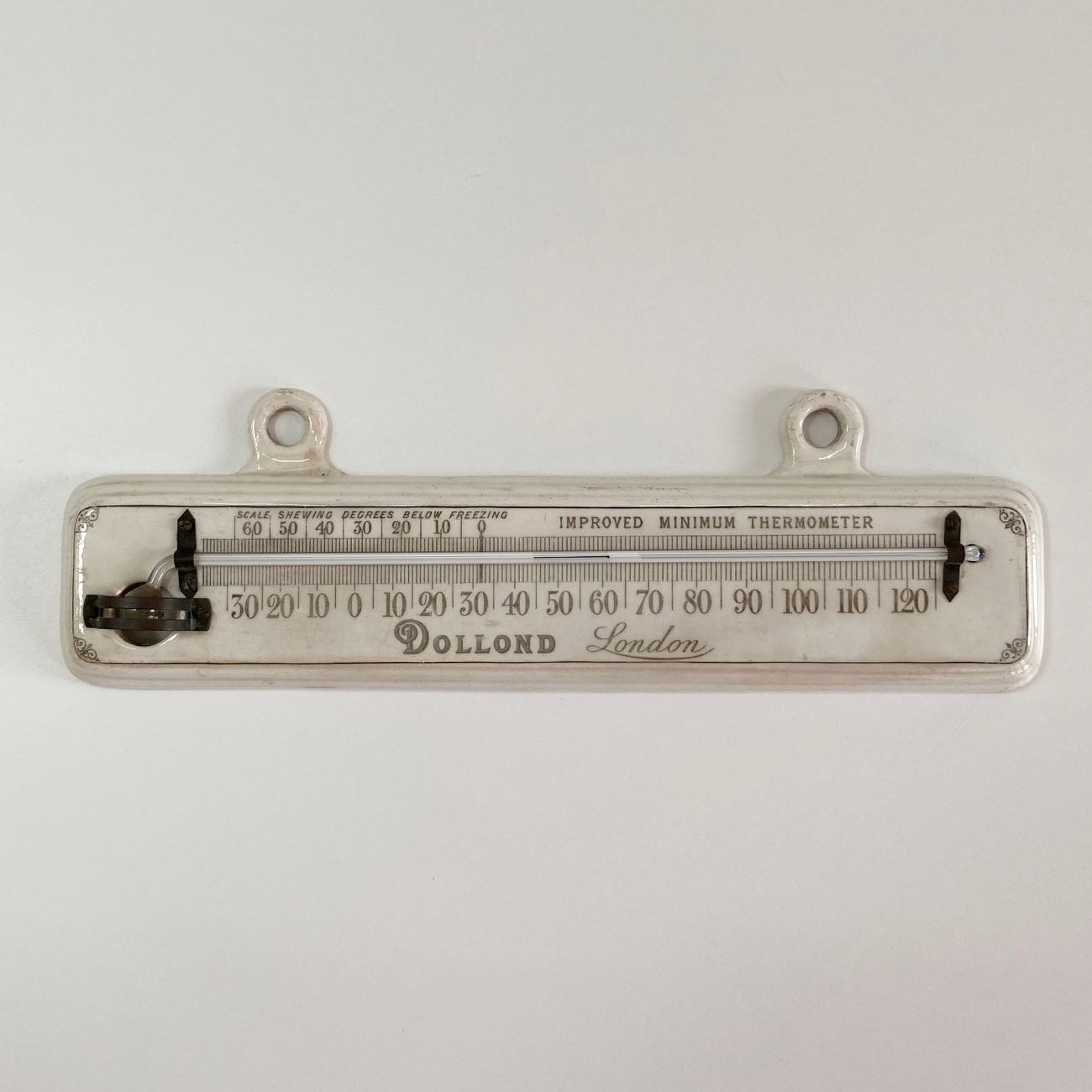 For sale, a large Victorian porcelain minimum thermometer by Dollond of London.

This unusual example measures 12” across and 4” in height on the wall with a graduated edge, porcelain scale plate incorporating two porcelain hanging loops at the top edge. The main painted scale measures -30 to 120 Fahrenheit but has an additional Centigrade scale at the top left above the thermometer to show freezing point and below. It is marked, “scale shewing degrees below freezing”. To the right is written, “Improved Minimum Thermometer” and Dollond, London at the base. The whole is nicely frames with black line edging and with fleur de lys type motifs at each corner.

The separate maximum and minimum thermometer was introduced in this form by John Rutherford and was presented to the Royal Society of Edinburgh in 1790. An account of that description still exists and is provided below:

“The following improvement on the construction of the thermometer, by which is fitted to mark the lowest or the highest point to which the fluid has attained in the absence of the observer, is due to John Rutherford, M.D. of Middle Baililish. This gentleman communicated it to me some time ago, and accompanied the description with one of his thermometers. The contrivance is so very simple and ingenious, that it well deserves to be made public. I therefore, by permission of the author, beg leave to lay an account of it before the Royal Society.

If it be required, that the thermometer should mark the lowest point to which the liquid has descended within any given time, a common spirit of wine thermometer must be provided, of a convenient size, with its point turned towards the bulb of the thermometer. This piece (the conical pointer) is about half an inch long, and of such diameter at the base, that it may move freely within the tube, yet nearly fill the calibre. It is to be allowed to move downwards till it be fully immersed in the spirit. After this has once been effected, it will be found, that it is not disposed to part again from the spirit; but if the thermometer be held vertically, with the bulb uppermost, it will immediately descend to the extremity of the column, but no farther: There it rests; and if by a diminution of heat the spirit contracts, it is drawn upwards at the extremity of the column, as this recedes towards the bulb. Now, let the thermometer be disposed, that its stem instead of being vertical shall be horizontal, (and such is the ordinary position of this thermometer) it may be readily imagined, that in this case, the conical piece shall equally; as before, follow any retraction of the column; but this should lengthen again, in consequence of an increase in temperature, the conical piece does not advance with it, but remaining fixed at the lowest point to which the column has descended, it allows the liquor to pass freely beyond it, as that again expands. Hence the point of the scale at which the conical piece is found to rest, denotes the lowest degree to which the liquor has sunk in the interval of the observation. To rectify the instrument for a fresh observation, nothing farther is requisite than to elevate the bulb of the thermometer, in order that the conical piece may sink by its proper gravity, to the extremity of the column.”

The company continued its association with royalty and went on to win a Great Exhibition Medal in 1851, a year before George’s death. His nephew (also George) succeeded in the ownership until his death in 1866 where after his son William continued to run the business. William was the final Dollond family member to run the company, finally selling out to a former employee of the company, JR Chant in 1871. Chant continued to use the company name until was acquired by James Aitchison in 1927 where after it became Dollond & Aitchison. In 2009 it became part of Boots the Opticians.