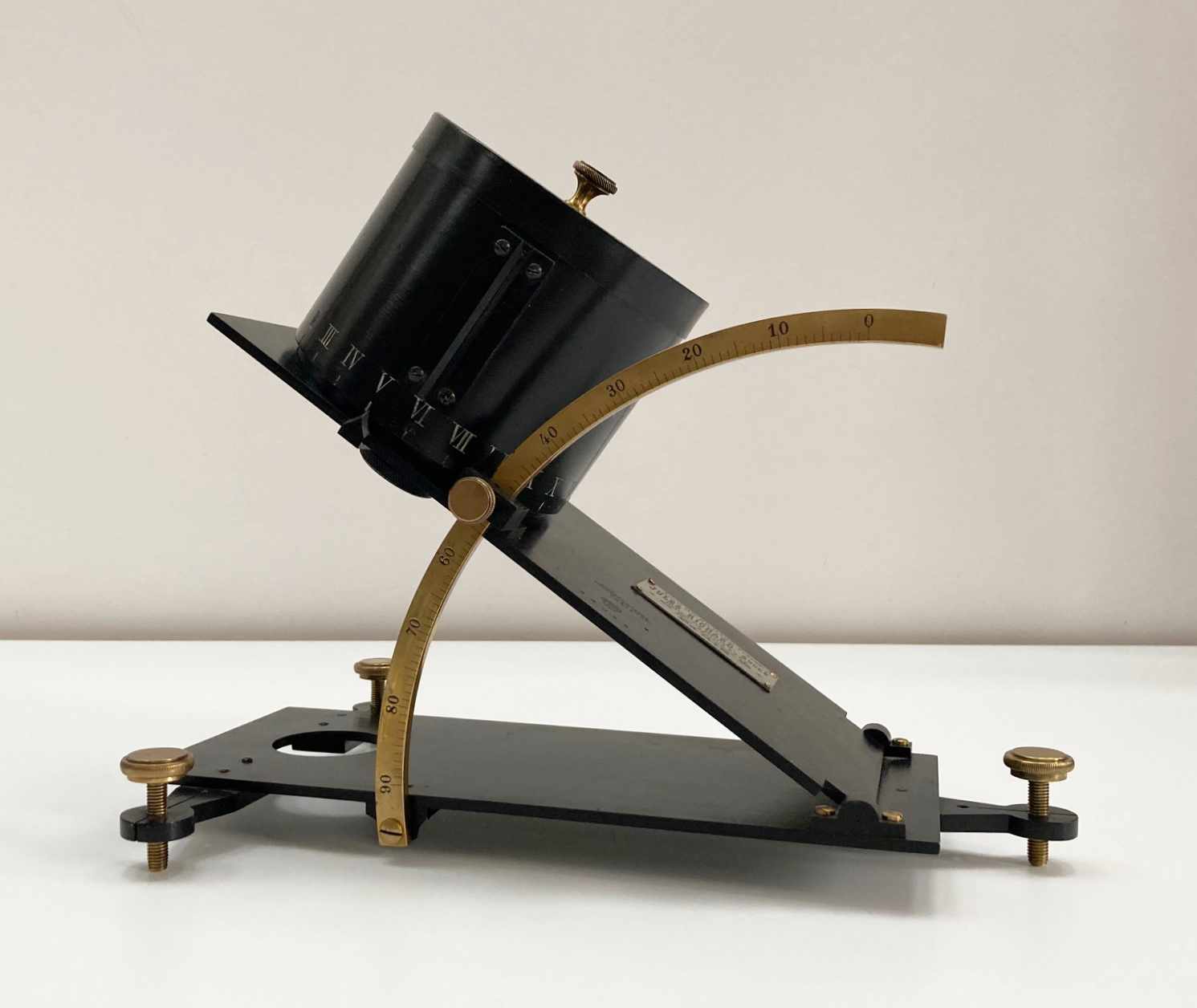 Comprised of a black painted metal base with three brass screw feet for levelling, the sunshine recorder’s clockwork mechanism is mounted on a second plate hinged to the base at one end with an arc scale to one side to allow for fixing and fine adjustment of its angle.

The clockwork barograph type drum is engraved with a twenty four hour dial in roman numerals around the outer edge of the barrel and a small slit to allow for the ingress of light features above the six o clock marker.

The mechanism is accessed by removing the lid on the top and a brass knurled knob can be unscrewed to access the photographic paper wrapped around the chamber. Working in a similar fashion to the the Jordan pattern sunshine recorder, the small slit to the outer barrel lets in a controlled amount of light which would record the sun’s pattern throughout a given time.

The clockwork mechanism can be accessed by lifting out the interior paper barrel for adjustment and winding. It has also been very recently serviced by a BHI affiliated horologist.

The hinged top plate has a maker’s plaque for Jules Richard successor to Richard Freres with typical reference to Patent without Governmental guarantee (Brevete SGDG) and an address of 25 Rue Melingue, Paris. Perhaps more interestingly, there is a second engraved mark on the plate stating the maker as “Richard Freres” and a serial of 88018. The detail of this can be read in more detail below but this provides useful dating evidence as the instrument must have been made around 1890-1891 when Richard Freres became Jules Richard. It is therefore likely that this instrument was stamped with the old company dies and subsequently retailed with the addition of the new Jules Richard name after the Company’s transition.

The design of this sunshine recorder bears great resemblance to the designs of Thomas B Jordan’s 1840 patterns for a “heliograph”. A pioneer in early photographic sunshine recording, the science of photography was a little too underdeveloped during the period to make his instruments reliable enough for serious meteorological use. In the design of this instrument, the Richard Company have cleverly taken on Jordan’s earlier work and combined them with James B Jordan’s later work of the 1880’s. The second half of the Nineteenth century saw a flurry of interesting designs as can be seen in the “Monthly Weather Review” of November 1897 although most of them are seldom encountered except for the Jordan and the Stokes Campell designs that eventually became the standard.

This is a handsomely constructed example of a kind that is very seldom seen.

The maker of the recorder was Jules Richard (1848 – 1930), the son of Felix Richard, Eugene Bourdon’s original partner (inventor of the Bourdon barometer). Trained under his father and numerous other scientific and clock manufacturers, Richard made his own name in the 1870’s in the manufacturing of telegraph equipment, also working closely with the French scientist EJ Marey on electrical and photographic recording techniques. Following the death of his father in 1876, he took over the family business and in 1882, he formed a partnership with his brother Max under the name of Richard Freres. This partnership was dissolved in 1891 (although the company maintained its partnership RF monogram) with Jules taking sole control of the business until 1921 when it was listed as a public company. It diversified in later years into photographic equipment but the bourdon movement was a stock trade item for the company and was put to numerous uses amongst their huge array instruments.