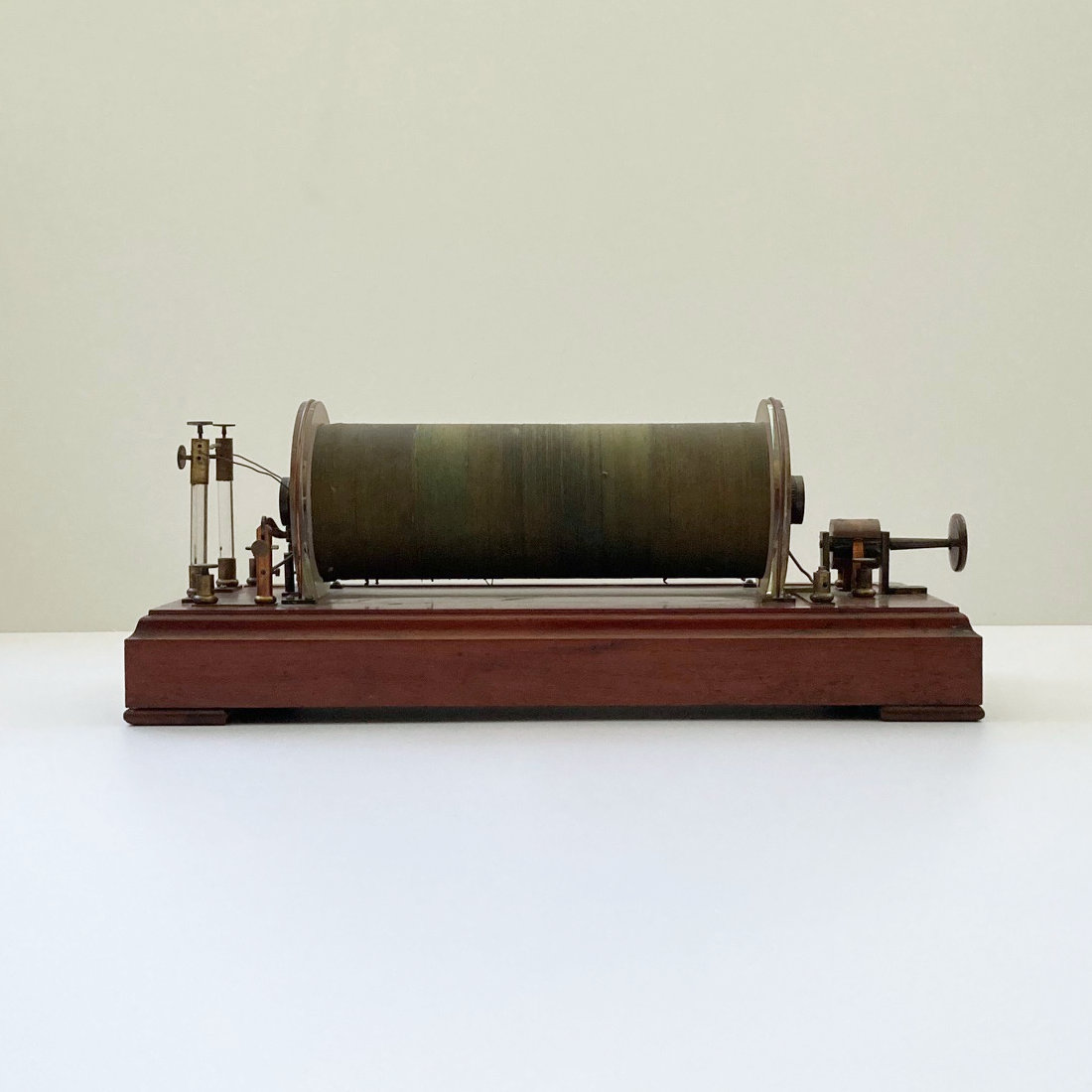 Comprised of a dark mahogany graduated base with a twelve-inch copper wound two-part coil with iron core and glass insulating circular end caps. At one end there are connections for the battery power source with a hand operated barrel switch to engage or disengage the battery power as required. The application of direct current to the inner winding causes the iron core of the coil to become magnetised which in turn effects a magnetic contact arm at the further end of the coil, namely the interrupter which rises and falls to continuously create and then break electrical contact. This motion has the effect of creating high voltage alternating current across the secondary coil which is then released via the two-pin spark gap provided on two upright insulated glass rods.

Although unsigned, this example conforms in design to all known examples of Ruhmkorff’s early induction coils (ref images provided) and is undoubtedly from Ruhmkorff’s Paris workshop of the 1850’s. Very few extant examples seem to remain in existence and I can find just two of similar design which are held in museum collections. An extraordinarily rare and iconic instrument from the early industrialisation period of electricity.

Heinrich Daniel Ruhmkorff was born in Hanover, Germany in 1803. Initially trained as a mechanical engineer in his birthplace under an engineer named Welhausen, Ruhmkorff first moved to Paris in the early 1820’s to work for a Physics lecturer but quickly moved to England to take up a position with the Bramah Company.

After a short stay in England, Ruhmkorff returned to Germany but moved back to Paris in 1827 to work for the famous Parisian instrument maker Charles Chevalier with whom he seems to have stayed until he finally opened his own shop on Rue Champollion in 1855. Ruhmkorff had of course patented his first improvements to the induction coil in 1851 so it would seem that the rising popularity with which his invention was met would have been the catalyst for his decision albeit four years after the initial patent application.

Despite common naming conventions for this instrument, the development of the induction coil began in the 1830’s following Michael Faraday’s 1831 investigations into what would ultimately become Faraday’s law of induction. Many prominent scientists developed upon Faraday’s work and there are conflicting accounts laying claim to the original inventor. Ruhmkorff’s claim related to the attention paid to the winding of the coil with copper wire, and numerous further refinements throughout the 1850’s led to the award of the Volta prize in 1858 by Napoleon III.

Ruhmkorff died in 1877 and was buried in Paris. It is suggested that he died in a state of near poverty having donated most of his riches to scientific and charitable causes.

An extraordinarily early and rare example of an induction coil from the workshop of this famous scientist.