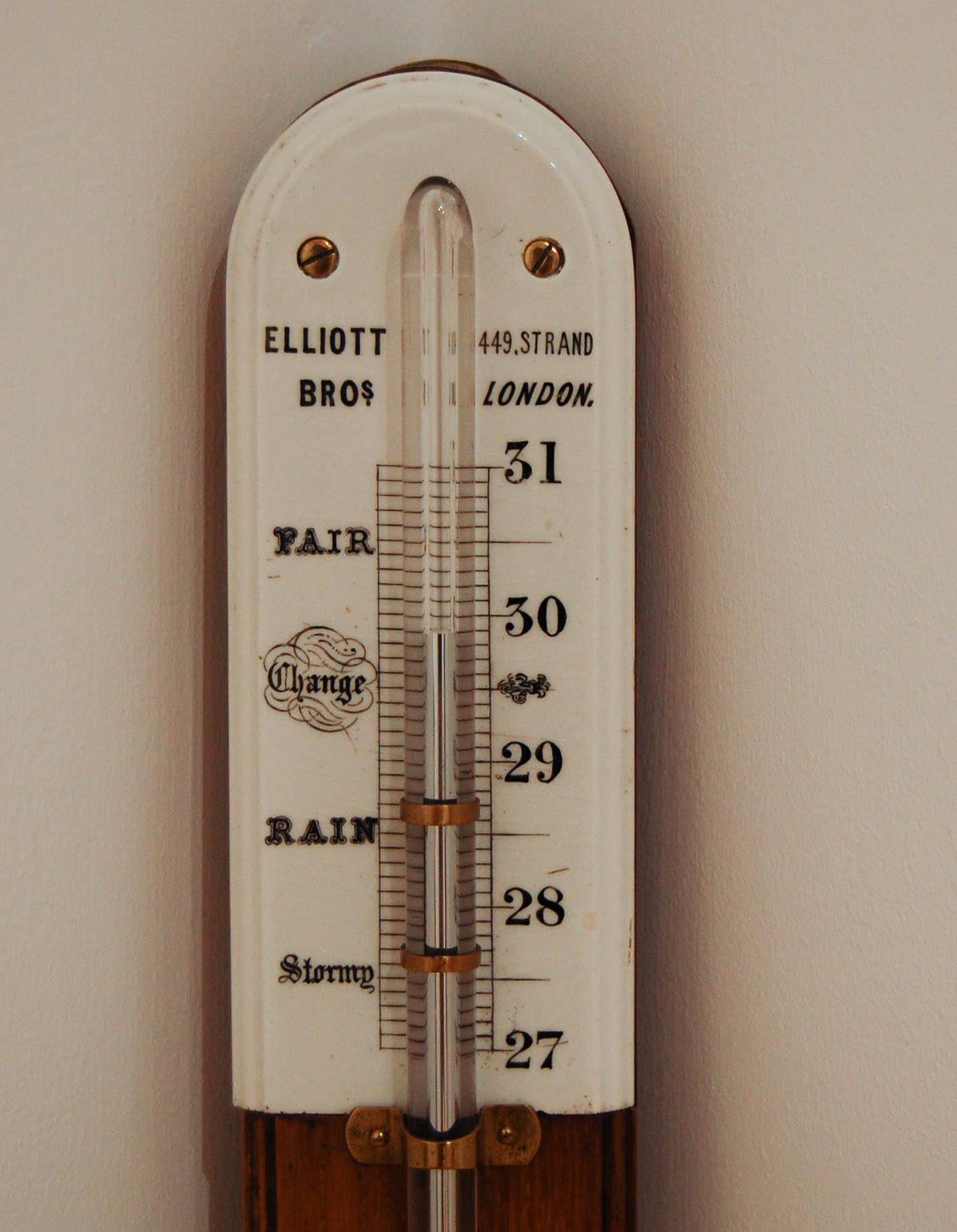 For sale, a highly unusual golden oak stick barometer with ceramic scale plate by Elliott Brothers of 449 The Strand London.

This rare stick barometer of small proportions is comprised of an oak body with exposed tube and graduated urn type cistern cover. The ceramic scale plate is screwed to the domed top and is painted with weather indications to the left and a small scale measuring 27 to 31 inches of barometric pressure. It is further painted to the top with the maker’s name, “Elliott Bros, 449 Strand, London. The scale indicator is formed by the use of a brass collar secured around the barometer tube and can be slid up and down according to changes in weather patterns.

Aside from its unusual form, the scale plate also has a registered design stamp to the back which dates the barometer to the 18th of December 1863. Further research for an Elliott Brothers design for this date proved unfruitful until it was noticed that the Birmingham Company of Thomas Pemberton & Sons had lodged a design on that day for a set of door furniture.

On closer inspection of the barometer, it then becomes obvious that the scale plate is actually formed from a cut down finger plate for an interior door. How the Elliott Brothers came across this ingenious idea remains unknown but it is clear that the barometer was designed and manufactured around the ceramic plate as the oak body mimics the edge design. Perhaps the cost of creating specific ceramic plates was considered too costly and the desire to manufacture with this material drove the brothers to seek alternatives but either way it is an ingenious reuse of materials but perhaps not something one would expect from this powerhouse of Victorian scientific instrument manufacturing.

A rather intriguing piece of Elliott Brothers output with an interesting story worthy of further research. The records for the company are held at the History of Science Museum in Oxford and these may provide some further evidence.

Elliott Brothers, began in the early nineteenth century and was formed in 1804 by the founder William Elliott. Following the completion of his apprenticeship to instrument maker, William Blackwell, he began trading under his own name, W. Elliott and plied a successful trade in London. Elliott is considered to have been married three times during his life and early records suggest a number of makers with the same surname working in London at this time. Evidence is not yet complete to confirm just how many of these characters were related but records suggest that William’s son Charles Alfred from his third marriage was apprenticed to him by 1837. William must have been a man of means by this point as his elder son, Frederick Henry had graduated from Christ’s College in Cambridge by 1845.

Four years later in 1849, William took both of his sons into business, changing the name to William Elliott & Sons and in the following year exhibited at The Great Exhibition where they were a recipient of a bronze medal for their work. By this time, the company had moved from their original base in High Holborn to their well known address at 56 The Strand.

William died in 1853 leaving the business to his sons and by 1854, the pair had changed the name to Elliott Brothers and in 1857 subsumed the highly renowned instrument making company, Watkins & Hill after the deaths of the partners. Under the astute business leadership of Frederick, Elliott Brothers worked with a number of leading scientists of the period involved themselves in the production of early electrical instruments, telegraphic equipment and the new aneroid barometer as well as their standard stock. During this time, numerous patents are registered for barometers, telescopes and drawing boards amongst others.

In 1867 the company exhibited at The Paris Exhibition by which time they had secured premises at 449 The Strand and three years later in 1870, records show that the partnership was dissolved upon Charles’s retirement. Frederick continuing to direct the business until his death in 1877. The business however, was continued as Elliott Brothers under the guidance of William’s wife Susan who took leading telegraph engineer, Willoughby Smith into partnership.

Upon Susan’s death in 1880, the firm finally fell away from family ownership although the Smith family continued to run Elliott’s with Willoughby’s sons, William Oliver and Willoughby Statham taking roles as managers. Under this ownership, the company won a gold medal at the Paris Electrical Exhibition in 1881.

By 1893, Elliott Brothers had merged with Meinrad Theiler & sons but kept the original name and with GKB Elphinstone joining as chairman through this merger, the company gained vital contacts in The Royal Navy. By this time, the company is listed as trading from a new address at 101 & 102 St Martin’s Lane and began to focus business on electrical instruments for the military. Presumably, this more industrial focus led to the company moving out of London in 1898 to Lewisham in Kent but it continued to produce a range of instruments from meteorological to telegraphic whilst also manufacturing naval gunnery tables, it employed 200-300 people by this stage.

In 1902, Elliott Brothers were awarded the Royal Warrant and prior to the Great War, it started to produce aviation equipment for The War Office. Throughout this period, the company profited from its military links and was incorporated as Elliott Brothers (London) Ltd in 1917.

After the World Wars, Elliott’s story is one of specialisation with various subsidiary arms such as Aviation, Automation and Nucleonics being singled off. The company acquired numerous companies throughout the twentieth century before being taken over in 1967 by The English Electric Co and just a year later that company was subsumed under GEC alongside Marconi. However, GEC’s subsidiary arms made reference to both Marconi & Elliott in their names. It was not until 1984 that the Elliott brand was dropped in favour of GEC Avionics, it was renamed again in 1998 as Marconi Electronic Systems and finally absorbed a year later into BAE Systems where the remnants of this prestigious company remain.