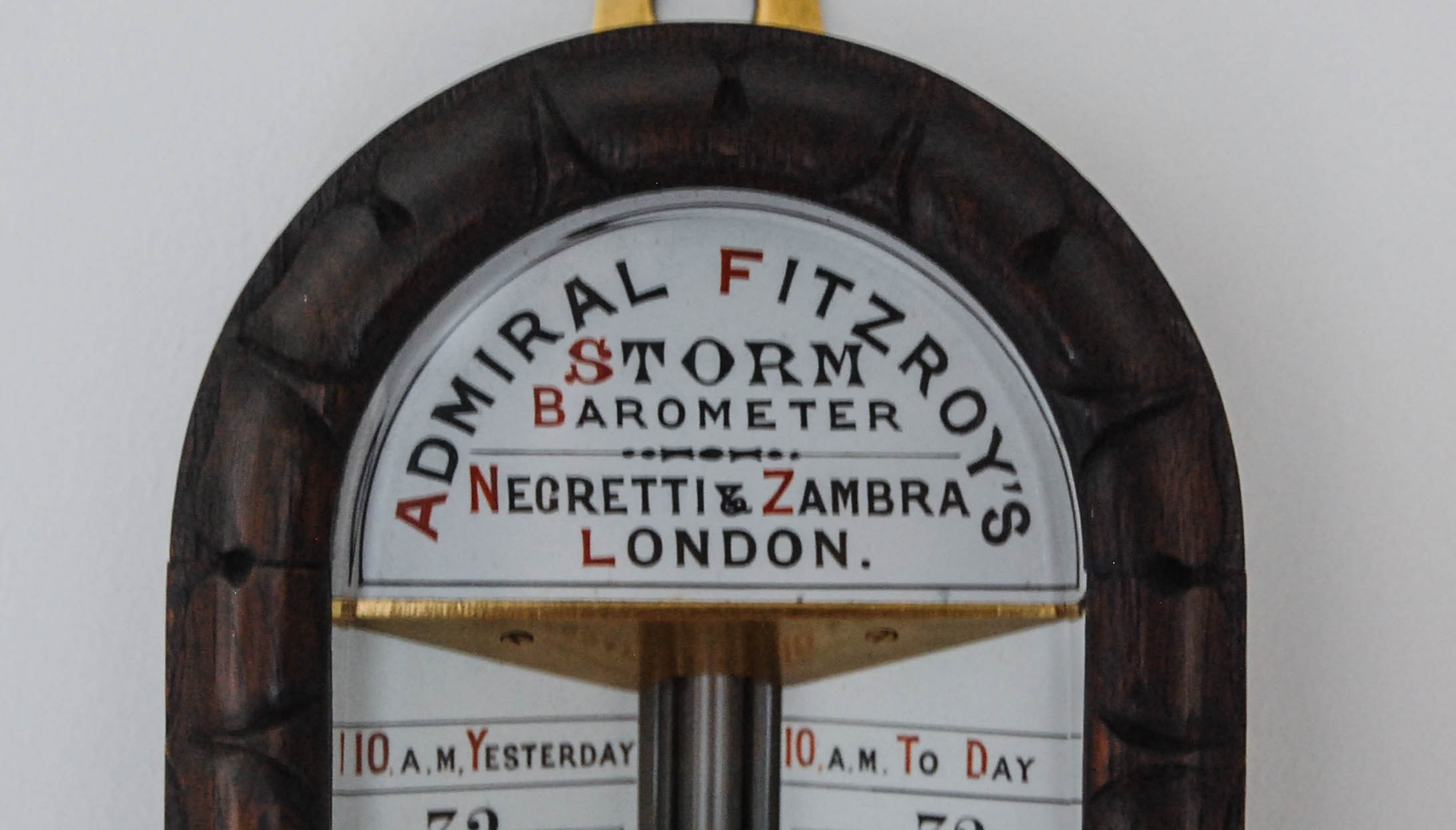 This superior example of its type is comprised of an oak body with a cistern cover richly ornamented with a central floral motif, chamfered and carved stem and a carved domed top supported by scroll pediments either side.

The stem is adorned with a large 13 inch thermometer showing both Fahrenheit and Centigrade scales on an opaline glass with red and black numerals and has richly carved capital and pediment motifs to the top and bottom.

The 10 inch scale plate contained in the familiar dome top style has an inverted piece of opaline glass to each side with similar red and black detailing reflecting Admiral Fitzroy’s weather predictions and a scale of 27 to 31 inches of barometric pressure. The barometer tube rising between the scale plates is of an unusually thick bore and has a Vernier scale to either side on a rack and pinion movement adjusted by two oak setting keys below. The two scale plates and accompanying verniers would allow the user to take one measurement at 10am the first day and then another with the other side on the following day and thus enabling them to visually track the movements in atmospheric pressure over time. The dome top of the case is mimicked within the scale plate by a separate domed piece of glass, stating, “Admiral Fitzroy’s Storm Barometer – Negretti & Zambra London.”

The design for the Storm Barometer originally began life as the Sea Coast barometer and was conceived by Negretti & Zambra at the behest of Admiral Robert Fitzroy following a request to the company in 1857 to provide an example of a stick barometer that would be fit for installation at sea coast stations throughout the UK. Fitzroy’s new position at the Meteorological Office and his previous experiences in the Royal Navy and upon his famous expedition in HMS Beagle with Charles Darwin had shown him the importance of precise methods of weather prediction and his intent was to make these expensive instruments accessible to individuals who were involved in the maritime and coastal industries.

These iconic instruments were initially supplied through the Meteorological Office and paid for by HM Government but Negretti & Zambra were certainly advertising the early porcelain scaled version to the general public by 1864 as they are recorded in the company’s, “Treatise on Meteorological Instruments” with advertising that stated that, “many poor fishing villages and towns have therefore been provided by The Board of Trade, at the public expense, and through the humane effort of Admiral Fitzroy, with first class barometers, each fixed in a conspicuous position, so as to be easily accessible to all who desire to consult it”.

They also relate that the Royal Lifeboat Institution (with whom Fitzroy was also associated by 1859) had similarly procured examples for their coastal stations and examples can still be found with scales relating to the RNLI or with the words, “as used by” the RNLI within the dome.

It wasn’t until Fitzroy’s untimely death by suicide in 1865 that Negretti & Zambra started to use the Admiral’s name in conjunction with the barometer, effectively leading to the birth of the Admiral Fitzroy’s Storm Barometer. With the immediate popularity of Fitzroy’s weather predictions and the more widespread availability of the barometer in general, Negretti & Zambra used the name in preference to the old “Sea Coast Barometer” naming convention and although it gained disapproval from Fitzroy’s successor at the Meteorological Office, the company may have felt somewhat entitled to use the opportunity given their early use of his predictions on their barometers and their support in proliferating the understanding of his new system.

The company’s famous and voluminous catalogue of 1880 shows just how this pattern had developed and indeed how popular it had become. The standard double Vernier version was retailed at £6,10 and was raised to £8,8 for an ornamental carved oak case such as this one. With the addition of opaline glass scales the pricing of this model was further raised to £15,15 and were considered, “very suitable for public institutions”. Perhaps the only places that would have been able to afford such an expense!

These showpiece examples would of course, not have been intended for the purpose with which they were first conceived but it did not stop Negretti & Zambra quoting a Fitzroy report from 1864 in regards to the reliability and benefits of the barometer at coastal stations. It was an extremely shrewd piece of advertising on their part and they ensured that enough variances of style were available to suit the pockets of the population in the later part of Queen Victoria’s reign.

Regarding the company itself, Negretti & Zambra were a leading name in the production of meteorological and scientific instruments and had a company history dating back to 1850 although their parents were amongst those Italian emigres that bolstered the British meteorological instrument making industry at the turn of the century.

Throughout their long and esteemed history they exhibited at British industrial fairs throughout and became makers to both Queen Victoria and Edward VII. Owing to changes in the business, the firm ceased the public retailing of scientific instruments sometime around the late 1960’s and continued with a focus on the aviation industry in numerous guises until its eventual liquidation in the year 2000. They are today perhaps the most collected of the scientific instrument firms which bears testament to the quality of their work.

This rare and exquisite example of a Storm Barometer contains all of the features outlined in their catalogues to confirm this piece as one of their most expensive models and would have been only been afforded by individuals of means or rich institutions and the quality is simply breath-taking. The opaline glass is a significantly rare feature on these barometers and remains clear and crisp. It is in full working order and in fine condition throughout.