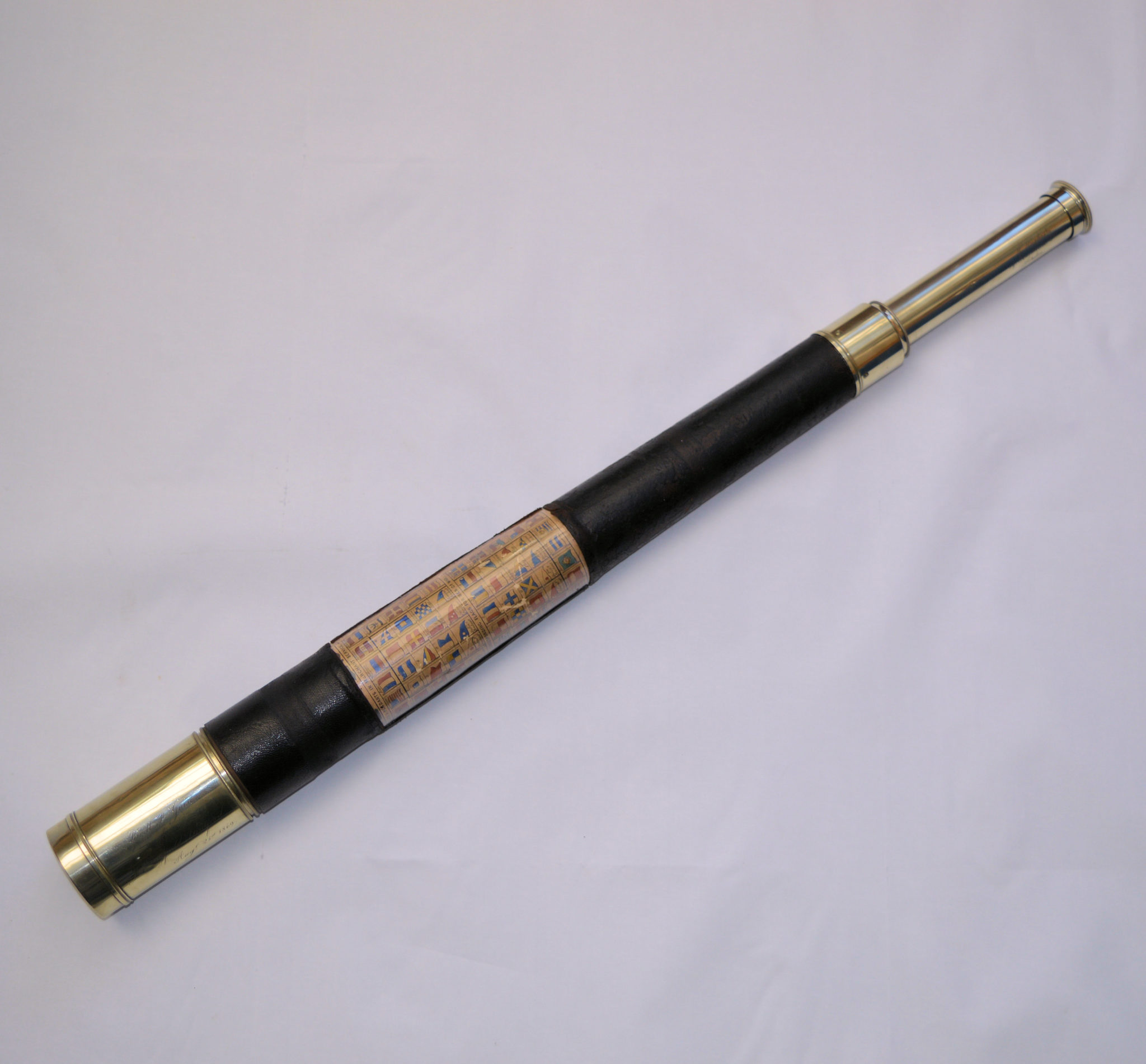 The telescope measures 62 cms closed and 80 cms with the draw tube fully out with an objective glass of 50mm diameter. It gives an excellent clear image when viewed through.
There is a dust slider to the eye piece. The draw tube is good and firm, without slack and snaps into sharp focus. There are no dents and the lenses are damage free. The leather covered wooden barrel has various scuff marks, some splits but is intact. The flag panel to the barrel shows, ‘Flags & Pendants in Merchant Service’ as well as, ‘Corresponding Flags for Men of War’; the panel covering is a later addition.
Rivett Francis Guise and John Wingfield-Stratford are both listed in the “The Peerage” which lists the naming of British and European Royalty, Nobility and Peerage, available to browse on the internet free of charge.
John Wingfield-Stratford, b. 10/12/1810 was the son of Lieutenant Colonel Hon. John Wingfield-Stratford. He married Jane Elizabeth Guise, daughter of General Sir John Wright Guise, 3rd Baronet. He held the office of High Sheriff of Kent in 1873, Office of the Justice of the Peace and Deputy Lieutenant.
Rivett Francis Guise, b. 24/04/1853, ( The Peerage page 42827 ), was the son of Francis Edward Guise (brother to Jane E. Guise) making him the nephew of John Wingfield-Stratford. His Grandfather was General Sir John Wright Guise, 3rd Baronet Guise of Gloucester, Knight Commander, Order of The Bath, Colonel of 85th Light Infantry (1847), General (1851), Knight Grand Cross (G.C.B., 1863). Francis Edward Guise married Henrietta Carnac, daughter of Sir James Rivett Carnac, 1st Baronet Carnac.
Sir James Rivett Carnac, 1st bt, born 1784 in India was the Governor of Bombay presidency 1838 – 1841, served in the East India Company and became Director of that Company for various periods between 1827 – 38. Rivett Francis Guise was mainly with the Bengal police.
It comes with an original period mahogany wall presentation stand.
I do not always receive enquiries due to difficulties with  my server so please feel free to contact me directly: [email protected]