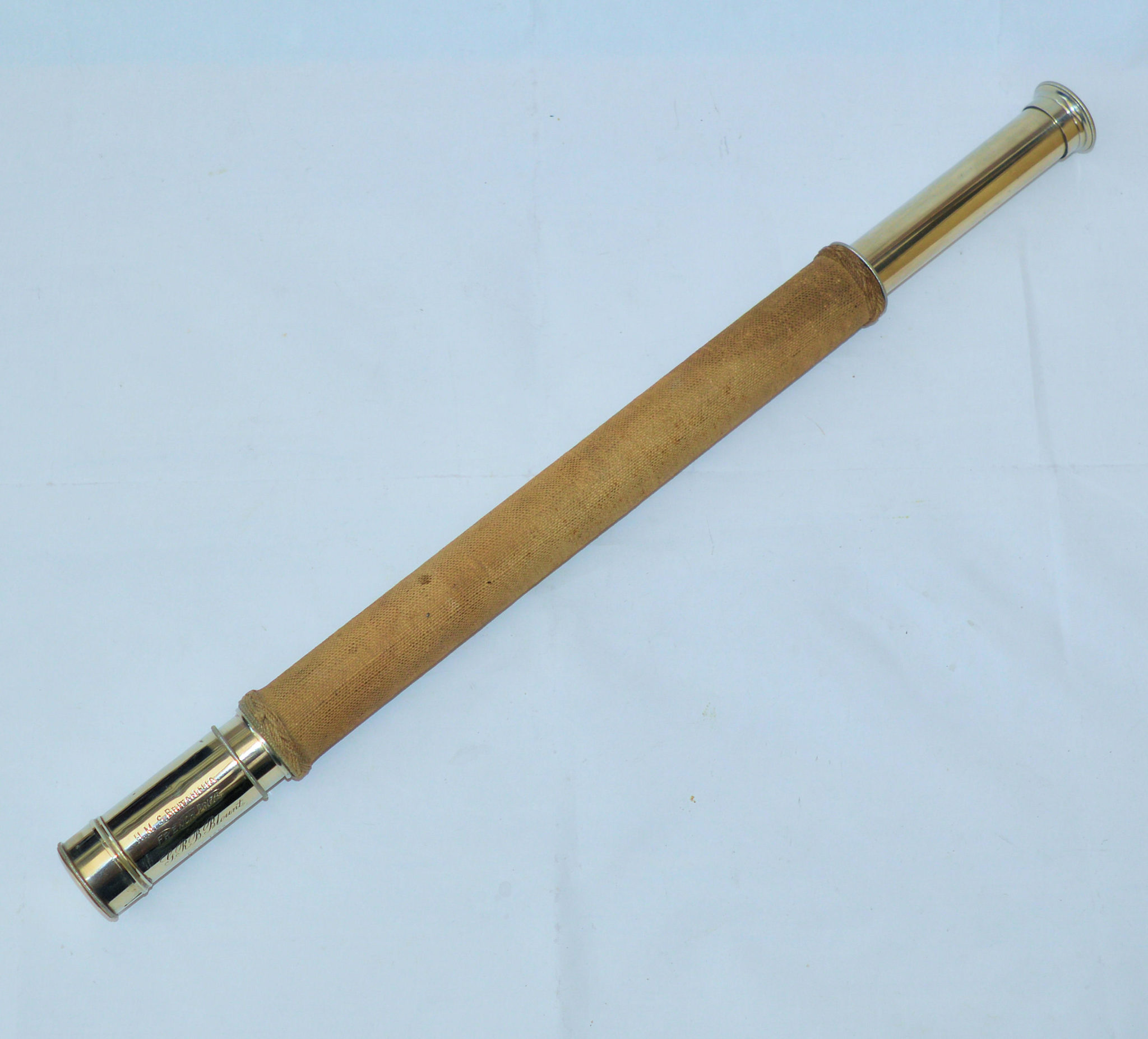 The telescope measures 17.5″ (44.5 cms) closed and 23.25″ (59 cms) fully drawn, with a clear aperture objective lens of 1.5″. With lens cap, eye piece dust slider and original canvas covering to the barrel with ‘Turks head’ plaiting to each end.

The telescope is very clear to look through.

George Ronald Beddard Blount was born in Kent on 8 October, 1877. After entering the Navy he was promoted to Lieutenant on 15 September, 1899. After some miscellaneous sea appointments, he was sent to Excellent to qualify in gunnery in October, 1900. The first of many gunnery officer postings that would dot his career was in Montagu in the Channel Fleet, from 2 May, 1905 to 20 August, 1906. In January, 1907 he was appointed gunnery officer in Majestic, and a month later as gunnery and first officer in Albion, where he would remain until August, 1909.

Requalifying at Excellent, he was to move his work into support of T.B.D. flotilla work, as first and gunnery in Leander from 9 December, 1909 until 15 February, 1910 when he moved to Sapphire. Leaving Sapphire on 1 May, 1912, he returned to Leander, this time working with the Seventh Destroyer Flotilla. He was superseded on 31 July, 1912 having been recently promoted to Commander on 30 June.

On 25 September, 1915, Blount was temporarily appointed in command of the monitor Lord Clive which Blount left on 16 November for an appointment on the Staff of Vice-Admiral, Dover.

Blount quit his staff work when he was appointed in command of the monitor Marshal Soult on 21 February, 1917. Blount was promoted to Captain on 30 June, 1917.

Blount was appointed from Marshal Soult to take command the battleship Commonwealth on 1 November, 1918. He was discharged after 23 months, on 30 September 1920.

He was appointed in command of Ramillies in August 1926 before moving over to command Barham in February 1928, remaining with her for seven months.

Blount was promoted to Rear-Admiral on 7 April, 1928 and placed on the Retired List at his own request the following day.

Blount was advanced to Vice-Admiral on the Retired List on 2 January, 1933.