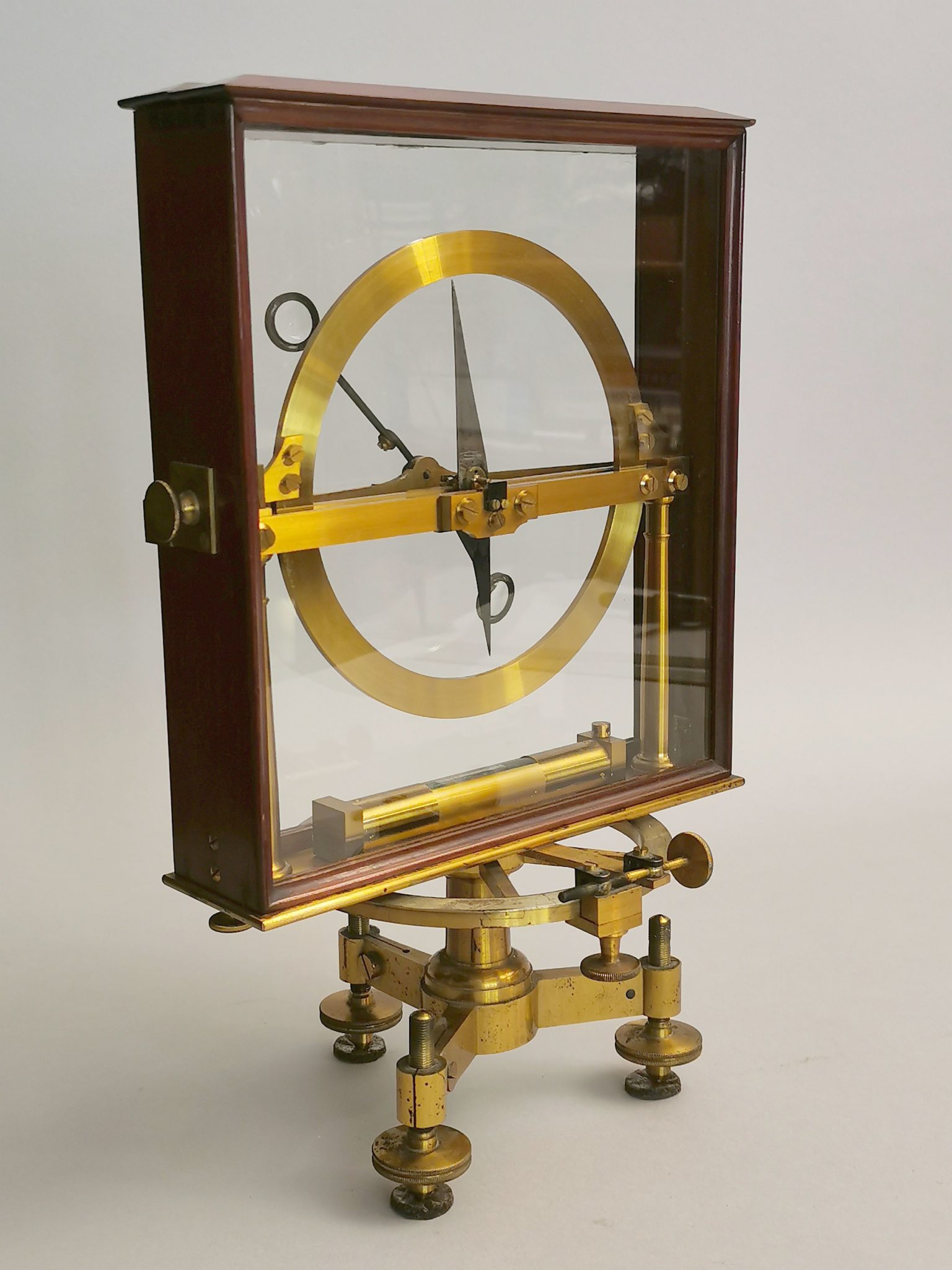 With this device the magnetic inclination is determined,  the angle that the direction of the earth’s magnetic field forms with the plane of the horizon.

A  magnetic needle can rotate in a vertical plane within a graduated circle. The latter is fixed to a brass support which, in turn, can rotate horizontally. The support is equipped with a spirit level and feet with leveling screws for precise positioning in the horizontal plane.

For a precise measurement it is first necessary to determine the magnetic meridian plane of the place. This is achieved by rotating the support until the needle is positioned vertically (in this position the horizontal component of the earth’s magnetic field is null) and then carrying out a second rotation of 90 degrees, to arrange the graduated circle in the plane of the magnetic meridian thus determined. . The magnetic inclination can be read on the graduated circle.

The instrument is enclosed in a wooden and glass case, through which the measurements are made; in this way it is preserved from the perturbations of the external environment.

Georg Hartmann first discovered dip angle in 1544, when he noticed the needle on a compass dipped towards the north hemisphere. Rather than explore this phenomenon, Hartmann sought ways to eliminate it. However, Robert Norman around 1576 investigated dip angle further and in 1581 described in print a device to measure this phenomenon.

Early dip circles were not accurate and gave poor results. Over the next 300 years many improvements were made, including reducing the friction between the needle and its pivot and encasing the circle in glass. Between the late 18th century and late 19th century the design approached its peak. Improvements which made the dip circle a practical aid for polar navigation were made by Robert Were Fox FRS, who developed in the 1830s the first dip circle that could be used on board a moving ship. Another important improvement to the instrument was developed in the 1830s by the Dublin physicist Humphrey Lloyd, who devised a way of attaching a magnetic needle at right-angles to the dip needle in order to measure the intensity of force (by seeing the extent to which the right-angle needle deflected the dip-needle).

Feel free to ask for futher photos and information

Eppursimuove is located in the northwest of Italy. I deal with antique scientific instruments and their history. This passion has turned into a profession that leads me every day in search of ancient instruments that helped us to observe, measure, explore and know the sky and the earth. They still amaze and make us wonder, as they did for their original makers and users. For this reason they must be preserved and collected. Please feel free contact me if you need more information on listed items. Thanks.
Recently and in the future, enquiries and sales are managed by Maddalena Padovan (Ugo's daughter).