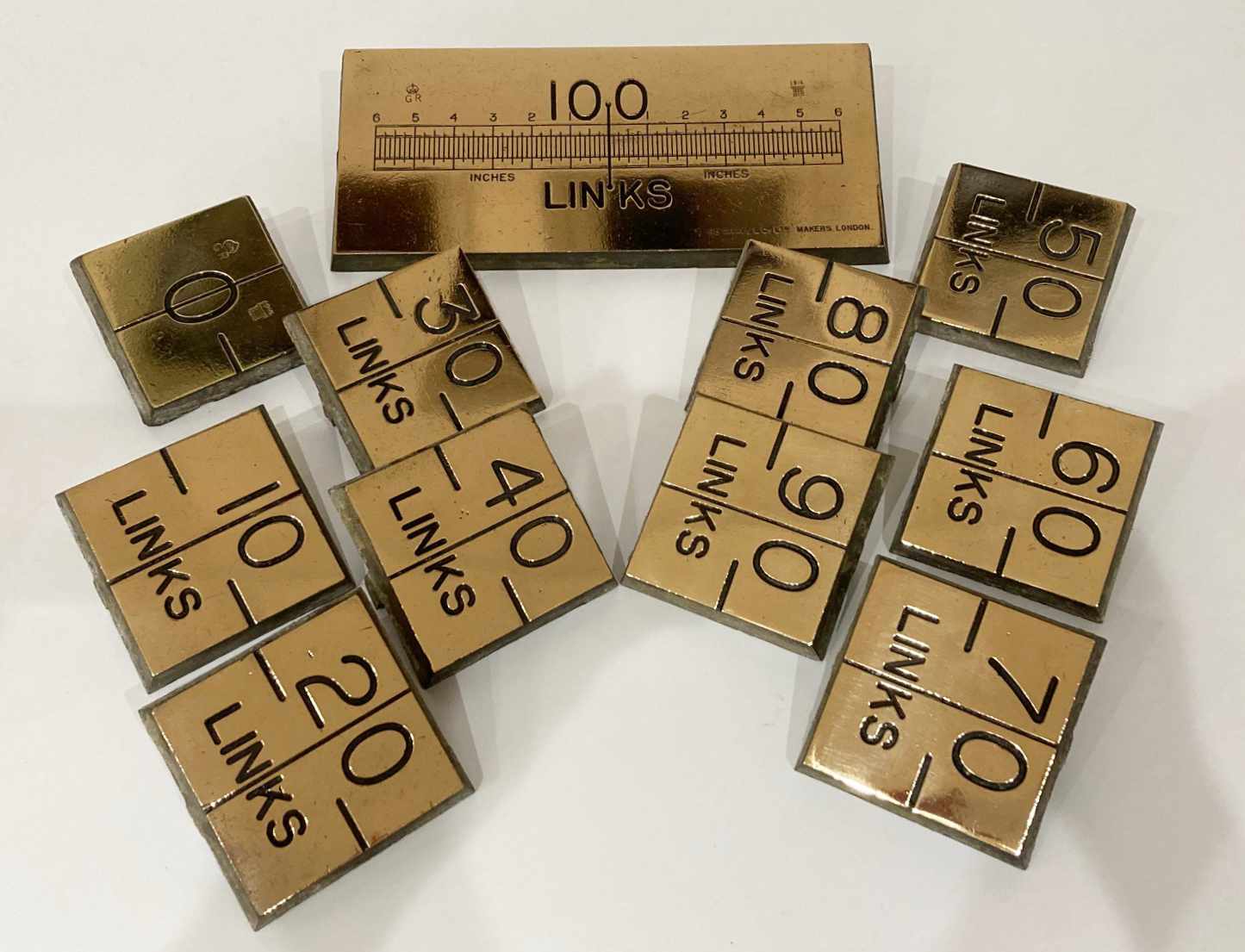 Solid brass plaques such as these were originally produced in 1876 by The Board of Trade under Sir George Airy to provide public access to British imperial standards and are reputed to have been a means to protecting the standards after the originals were destroyed in the Palace of Westminster in the 1830’s. On that basis, The Board of Trade commissioned three set from Troughton & Simms to be placed at Trafalgar Square, The Royal Observatory at Greenwich and The Guildhall, London where they can still be seen to this day.

This later set is sadly of unknown origin but was produced by De Grave & Co Limited in 1914, both the zero and the one hundred plaque also bear the exchequer mark and GR for King George V.

The link is a unit of measurement based upon Gunter’s chain conceived in 1620 by Edmund Gunther and formerly used in land surveying. Effectively, a metal chain 66 feet long with 100 links would make a “chain”, one thousand links make a furlong and eight thousand link make a mile.

The prestigious makers of this set are perhaps one of the earliest and most recognisable of all the scalemakers.

The company confidently boasted a history dating back to 1670 but it is certain that a Charles De Grave was trading in London from 1767 until his death in 1799. The company was thereafter run by his wife Mary De Grave and she was adept enough to maintain control until 1844 as De Grave & Son, eventually being succeeded by her son Charles.

The company’s appearance at The 1851 Exhibition cemented the company’s reputation and the company had numerous Governmental and international commissions during the succeeding thirty years. Most available histories of the firm suggest that upon William Fanner’s death in 1871, the company reverted back to the name De Grave, Short & Co but an entry in The London Gazette of 1889 relates the dissolution of a partnership between a Henry Munday Clark and William Fanner (the younger) to form the company De Grave, Short & Co suggesting a later date.

Little can be gleaned from the records as to when Henry Munday Clark became involved in the company but it may be assumed that upon the removal of Fanner in 1889, his name was removed and Clark continued the business under a foreshortened banner. By this point Short was also dead which may account for the later markings to De Grave & Co Limited, the name that would have been most renowned.

The company continued until 1922 after which point it was consumed by their rivals Avery.

A hugely scarce set of Governmental standard plaques dated to 1914.