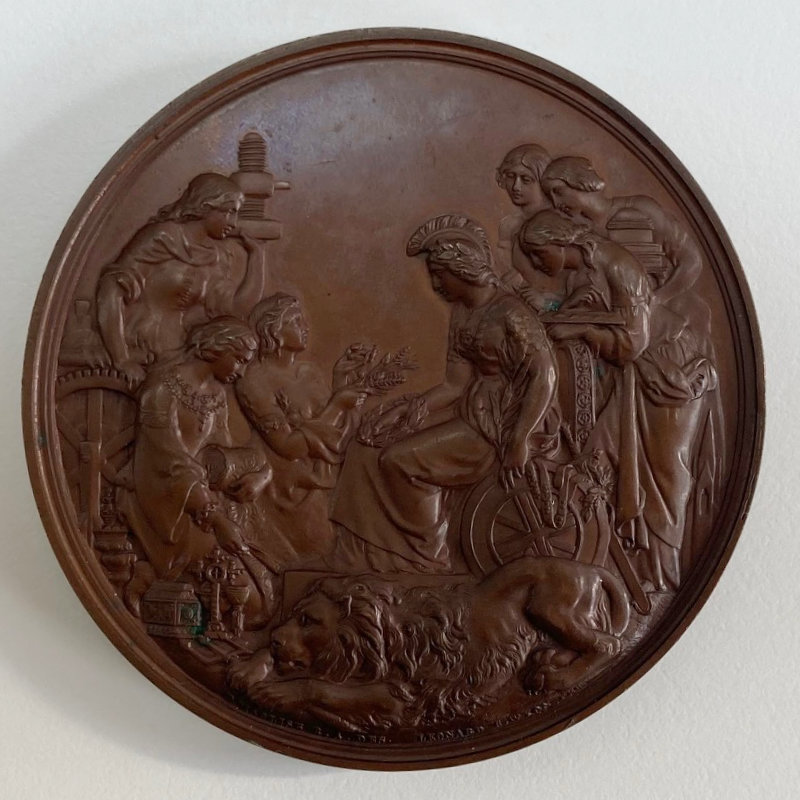 This superbly executed medal was awarded and individually engraved to each of the 1862 Exhibitors that were bestowed with a prize for their efforts.

Struck entirely from bronze, the obverse face shows Britannia seated with shield to her side and a sleeping lion at her feet. She is surrounded by six women each individually representing Industry, Agriculture and The Arts. The rim below the lion is marked with, D. Maclise R.A. DES. & Leonard C. Wyon FEC.

The reverse shows a wreath of oak running around the inner circumference with the words, 1862 Londini Honoris Causa which effectively translates to “London, a mark of esteem or respect” to the centre. In small letters to the base, the name of L.C. Wyon FEC is repeated.

The edge of the medal is further engraved to De Grave, Short & Fanner. Class XIII.

The International Exhibition was declared open by The Duke of Cambridge on the 1st of May 1862 in South Kensington on a site which is now occupied by The Natural History Museum. To give some idea of its scale, it featured nearly thirty thousand exhibitors from thirty six countries throughout the six months of its existence and welcomed over six million visitors.

This second exhibition was meant to follow up on the huge success of the 1851 Exhibition, originally intended to have been opened in 1861, it was delayed due to the Italian War of Independence, the Civil War in America and not least because of the death of Prince Albert, its Chief Patron and supporter. The latter reason is of course why Queen Victoria was not present at the delayed opening in 1862.

The building that housed the Exhibition was designed using brick and iron by the architect Captain Francis Fowke and contracted out to the firm of Kelk & Lucas. Sadly, Parliament declined the Government’s wishes to purchase the building after the Exhibition but the materials which were reclaimed were eventually put to use in the building of Alexandra Palace. Fowke was also responsible for proposing the building of The Natural history Museum which was eventually constructed in 1881 and remains on the site to this day.

De Grave, Short & Fanner’s appearance at The 1851 Exhibition cemented the company’s already fine reputation and they gained numerous Governmental and international commissions thereafter. Their appearance at the 1862 Exhibition just eleven years later was therefore inevitable and they followed up their previous success with this medal which according to the catalogue, was awarded, “For balances of good workmanship”.

The company was placed within Class XIII – Philosophical Instruments and it is worth mentioned some of the other names with whom De Grave exhibited alongside. Patrick Adie, Charles Babbage, Louis Casella, T. Cooke & Sons, JH Dallmeyer, JB Dancer, Elliott Brothers, J. Hicks, Kew Observatory, Negretti & Zambra, Pastorelli, Pillischer and Smith Beck & Beck were just a few of the names that appeared and like De Grave, won medals for their fine products. To see all of these great makers in the same room would have been simply astonishing!

Almost all of the Victorian scientific instrument making exhibitors made great use of this medal’s image on letterheads, trade cards, catalogues and other associated ephemera, to find an example of the original medal for one of these makers is extraordinarily rare.

Note: The images which support this piece also include an image of one of the company’s later trade cards which was pasted to a scale case I have previously sold. The image of the medal can be seen to the top right of the image.

The De Grave dynasty are perhaps one of the earliest and most recognisable of all the scalemakers. Their later trade labels confidently boast of a history dating back to 1670 but it is certain that a Charles De Grave was trading in London from 1767 until his death in 1799. The company was thereafter run by his wife Mary De Grave and she was adept enough to maintain control until 1844 as De Grave & Son, eventually being succeeded by her son Charles.

Upon Mary’s death, Charles De Grave took on a partner, Samuel Robinson Short, renewing the name to De Grave, Short & Co but this title was shortlived owing to the an additional partner William Fanner joining to form De Grave, Short & Fanner in 1845.

Under this guise, the company would as mentioned, exhibit at both the 1851 & 1862 London Exhibitions and it also appeared at the 1885 International Inventions Exhibition.

Most available histories of the firm suggest that upon William Fanner’s death in 1871, the company reverted back to the name De Grave, Short & Co but later trade cards suggest differently. It is perhaps an assumption that does not account for William Fanner the younger’s involvement in the company and it is certain that the younger Fanner maintained his family interest and the name was maintained until 1889. An entry in The London Gazette of that year announces that a partnership between a Henry Munday Clark and William Fanner (the younger) is dissolved to form the company De Grave, Short & Co.

Little can be gleaned from the records as to when Clark became involved in the company but it may be assumed that upon the dissolution of the partnership in 1889, Fanner’s name was removed and Clark continued the business under a foreshortened and earlier name.

The company continued until 1922 after which point it was consumed by their equally famous rivals Avery.

As a foot note, the associated names on the medal refer to Daniel Maclise (1806 – 1870), a Royal Academician painter whose painting was engraved by Leonard Wyon for the obverse face of the medal. It is unsurprising that Maclise would have been responsible for it given his close ties with Prince Albert. He was commissioned by the Prince to paint two monumental works at The Palace of Westminster, namely, “The Meeting of Wellington & Bluccher after The Battle of Waterloo” & “The Death of Nelson”. Maclise also went on to provide the painting which adorned the original Turner Medal art prize.

Leaonard Wyon was employed as a highly skilled engraver by The Royal Mint after having studied at The Royal Academy. His Father William Wyon was in fact the Chief Engraver and Leonard was born in 1826 at one of the houses of The Mint itself. Commissioned in 1850 to make medal portraits of Queen Victoria’s children, Wyon immediately went on to provide the engraving for the Great Exhibition Medal of 1851 and eventually succeeded to hid Father’s position at The Royal Mint in the same year. Given his position, he was the most obvious and skilled candidate to execute the engraving of the 1862 medal and his fine work continued to adorn numerous coinage and medals until his death in 1891.