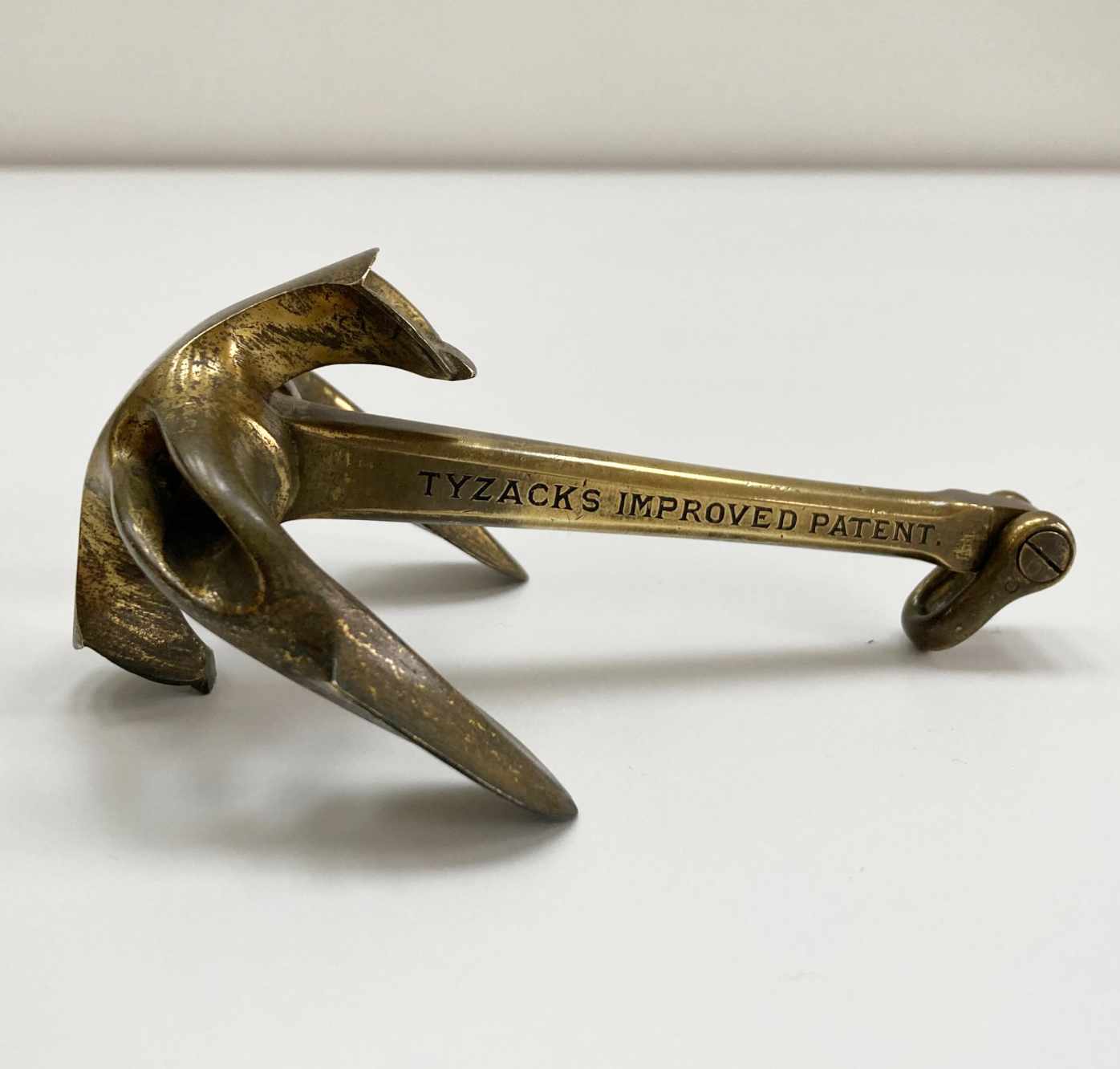 For sale, a rare salesmans model of a Tyzack’s Improved Patent Anchor

Manufactured entirely from brass, the anchor is comprised of a graduated shank with D-Ring to the top. The side is engraved with the words, “Tyzack’s Improved Patent”. The improvement reflected in Tyzack’s patent seems to rely upon the central arm which acts as both a steadying force and also a means to create greater holding power. It was more eloquently explained by Tyzack in the Marine & Naval Architect publication of May 1887: (please also refer to the images provided)

“The accompanying illustrations show the latest development of this well known anchor. The larger illustrations show an anchor constructed on these lines housed, while the smaller figure shows the anchor generally. From the latter it will be seem that a novel departure has been made in the construction of this anchor, in that it is provided with three instead of the usual two holding arms, the third being a central one, designed to steady the action of the anchor and prevent its rolling over, while at the same time materially increasing its holding power. The central arm is of the much approved “Trotman” type, having Roger’s pawls at each extremity, and working at the same angle and upon the same axis as the two ordinary arms, thus forming a central pivot upon which the anchor can swing, and from the fact that when holding, one pawl is always pressing upon the shank, it follows that the greater the strainupon the pawl the firmer is the anchor forced into the ground. The anchor in the shape of a triangle, and being thus held in a rigid upstanding position is always ready to bite.

As seen by the larger illustration, the above new patent anchor is well adapted to work into Mr Tyzack’s system of carrying anchors in hawsepipes, and when recently submitted by the patentee, Mr George Tyzack of South Shield, to Lloyds Committee, that Society gave their unqualified approval of these anchors for all vessels classed under their rules. We have much pleasure in thus briefly bringing under the notice of our readers Mr Tyzack’s latest improvements in anchors, which for quality of design workmanship, and materials leave nothing to be desired.”

Tyzack produced numerous patents and this is likely to have been a salesmans sample or perhaps a model that would have been used as a submission for Governmental contracts. The competition for sales to large bodies such as the Royal Navy and The Royal Life Boat Institution were fierce and there is evidence of trials involving his anchors in numerous contemporary journals.

Although this particular model is not present in the Greenwich National Maritime Museum, a large collection of model anchors exists as part of their inventory which may have been a result of aforementioned submissions. There is certainly one example of a later Tyzack triple grip anchor (Object ID SLR1906).

The Tyzack family originaly hailed from Totlay in South Yorkshire and were noted for their metalworking skills. The first recorded company was of Thomas and William Tyzack who set up a successful tool-making business in 1812. The brothers parted company in 1825 to pursue their own interests, whereafter Thomas Tyzack & Sons was created. It is likely that George was one of the three sons working with their Father in Sheffield by the 1860’s but the various nuances associated with the complicated Tyzack businesses are difficult to discern. It is clear however from the patent records that George had begun designing anchors by the 1870s and continued to submit patent design throughout the rest of the Nineteenth Century from his base in South Shields.