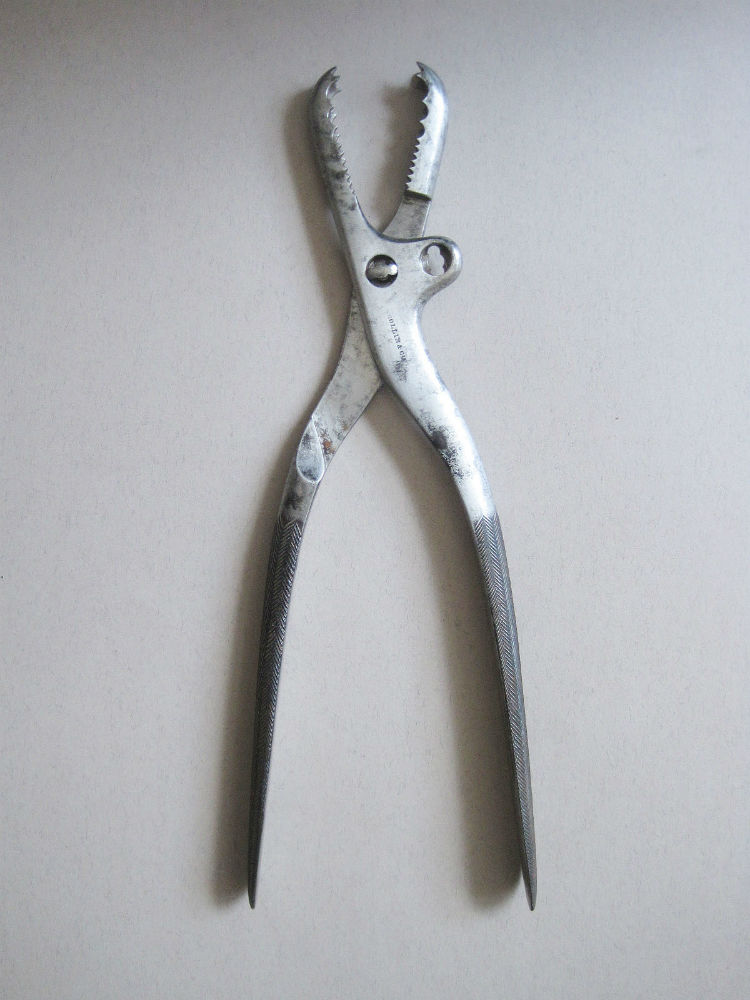 A good example of Farabeuf’s osteophor or davier by Collin&Cie. Used in osteotomy for grasping and firmly holding a bone. Modern versions are is still in use today. The original instrument is shown in Farabeuf’s PRECIS DE MANUAL OPERATOIRE, 1889:188–see last image. It is worth noting that the instrument shown in Farabeuf’s book is by Collin, suggesting that this firm was the first to manufacturer it. Quoting Wiki: “Dr. Louis Hubert Farabeuf (1841 – 1910), French surgeon who is said to have introduced hygiene in French medical schools. His statue dominates the central court of the National School of Medicine in Paris whose main amphitheater is also named after him. Farabeuf wrote some short surgical booklets (précis)[1] and designed several medical instruments (such as the Farabeuf Elevator) that are still in use today. His passionate writings and descriptions of amputation surgery attracted the attention of writers and scholars interested in the aesthetics of eroticism. Salvador Elizondo wrote a cryptic biography of Farabeuf[2] in which he emphasized and exaggerated the surgeon’s morbid eroticism. It is through this “secret classic of the aesthetics of evil” that Farabeuf is mostly known, as Elizondo’s work was translated in half a dozen languages. Elizondo presented Farabeuf also as a French secret agent in China after the Boxer Rebellion, who worked secretly for the French Jesuits in sketching a plan for the evangelization of China. Elizondo mixed in Farabeuf, or the chronic of an instant events that he borrowed from the lives of Dupuytren, Muybridge, Daguerre, Nadar, and others.”