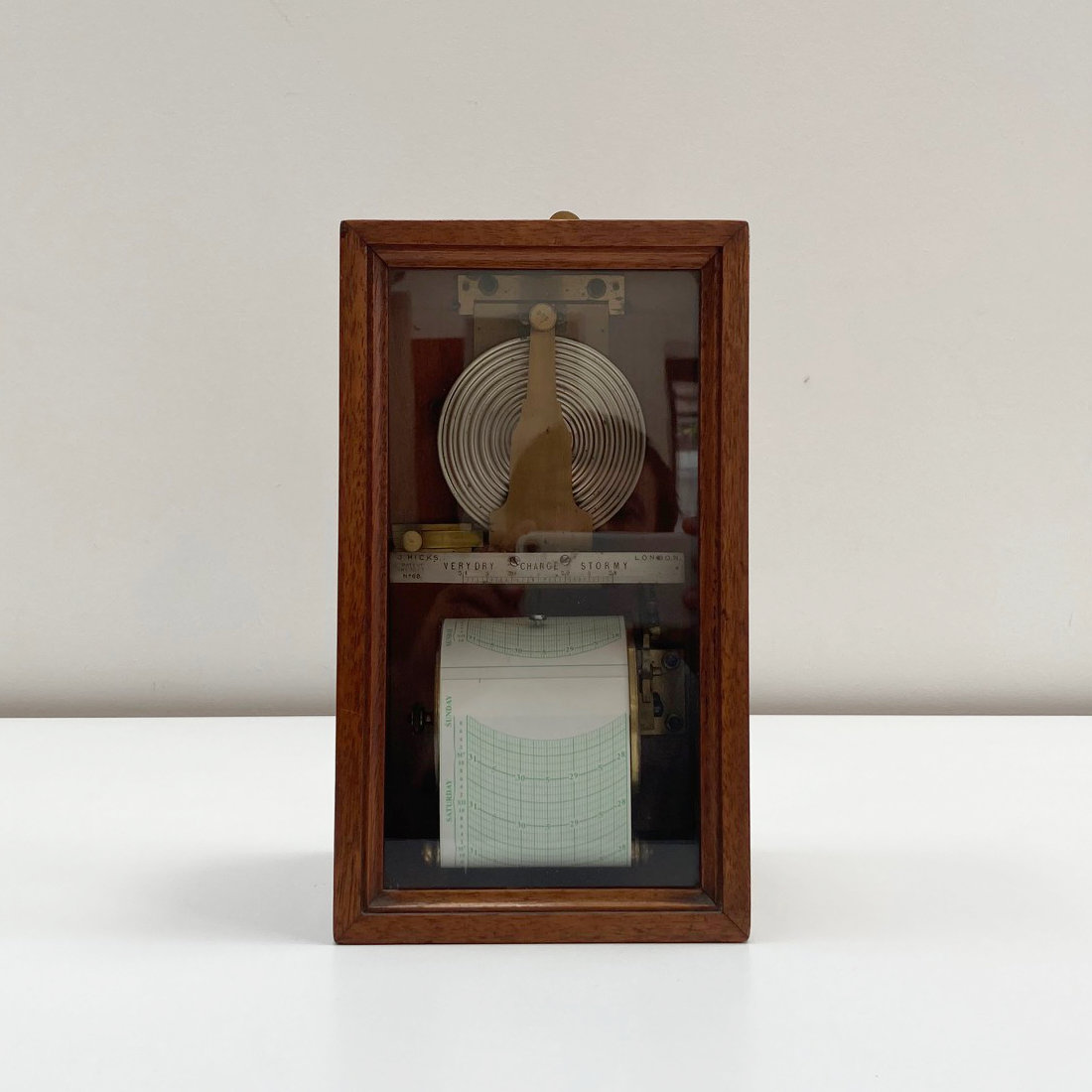 This unusual barograph is set within a hinged mahogany case with a hanging loop at the back for wall-mounting. The glazed front cover is secured by to hook and eye fasteners at the top and when opened reveals a large exposed aneroid capsule and movement with altitude adjuster at the top and small silvered and engraved rectangular scale plate at the base.

The scale is divided for 28 to 31 inches of barometric pressure and has the patent no: 7323 to the left and the serial number 68. The top left and right hand corners are further engraved to the British retailer and equally famous instrument maker, J. Hicks, London.

The pen arm is placed below the movement and works on a horizontal plane. It is cleverly supported by a crutch which is connected to a cam on the clock drum below. Every fifteen minutes, the cam’s movement releases the crutch which applies downwards pressure to the pen and places a dot on the paper. This ingenious solution was introduced by Redier to try to resolve the inaccuracy caused by friction on the pen arm produced by most standard types of barographs.

The seven day clock drum below is mounted horizontally below and the paper is looped around its outside and then tensioned by a smaller secondary bar suspended on sprung wire each side to create the correct tension on the graph.

The aneroid movement itself is also mounted on a hinge at the top and secured by a brass bolt to the left hand side. This additional function allows the movement to be raised away from the clock when the paper needs to be changed.

This scarce design was patented by Antoine Redier the famous French clockmaker and inventor in 1891. It is also lodged under the name of Georges Meyer who went on to lead the Redier Company after the founder’s death. Redier was born in 1817 in the French town of Perpignan. His Father was a Goldsmith and following his education, the young Redier began work at his Father’s business. The family were acquainted with the scientist Francois Arago and it was under his advice that Redier took the exams for entrance to a Paris watchmaking school run by Louis Frederic Perrelet. He excelled in his schooling and went on to work for Henri Robert for a few years before eventually setting up on his own account in 1842 via the purchase of the Duchemin workshop in Paris.

One of Redier’s earliest clients was the inventor Lucien Vidie, now famed for the invention of the aneroid barometer capsule movement. In 1845, Vidie requested Redier to make the first one hundred examples of his new instrument however the relationship turned immediately sour after Vidie questioned the quality of the finished product and a long drawn out legal battle ensued which was finally settled in Redier’s favour some years after.

Just two years later, Redier invented and patented what would become the first travel alarm clock with adjustable wake up timing. His career was prolific from this point on, Redier accumulated over sixty patents to his name including a mercury recording barograph and the example here which was produced just a year before his death in 1892. During his life he was also made a knight of the Legion of Honour (1863) and later became an Officer in 1878,

After his death, the company was bought by Hector Levy and managed by Georges Meyer although its popularity waned after the loss of the founder. It was finally bought out in the Early Twentieth Century by the equally famous French manufacturer Leon Maxant.

The instrument maker and retailer of this fine instrument, James Joseph Hicks was born in Cork, Ireland in 1837 to a poor farming family and was sent to London for schooling. He was apprenticed to the famous Louis P Casella where he remained until 1861. In that short time he had already risen to become Casella’s foreman, showing just how able the young Hicks was. He began to trade in his own right in around 1861-1862 at 8 Hatton Gardens, London and was respected enough by 1864 to have been granted membership to The British Meteorological Society from where he probably formed his business relationship with Russell.

After Hick’s death, the Stanley organisation amalgamated the Hicks business with Heath & Co and Perken Son & Co to become Heath, Hicks & Perken and it was eventually wound up in 1979.

A very rare barograph example with a very low serial number. It has been recently serviced by a BHI qualified horologist and remains in good working condition. It comes supplied with a number of replacement papers and its original key.