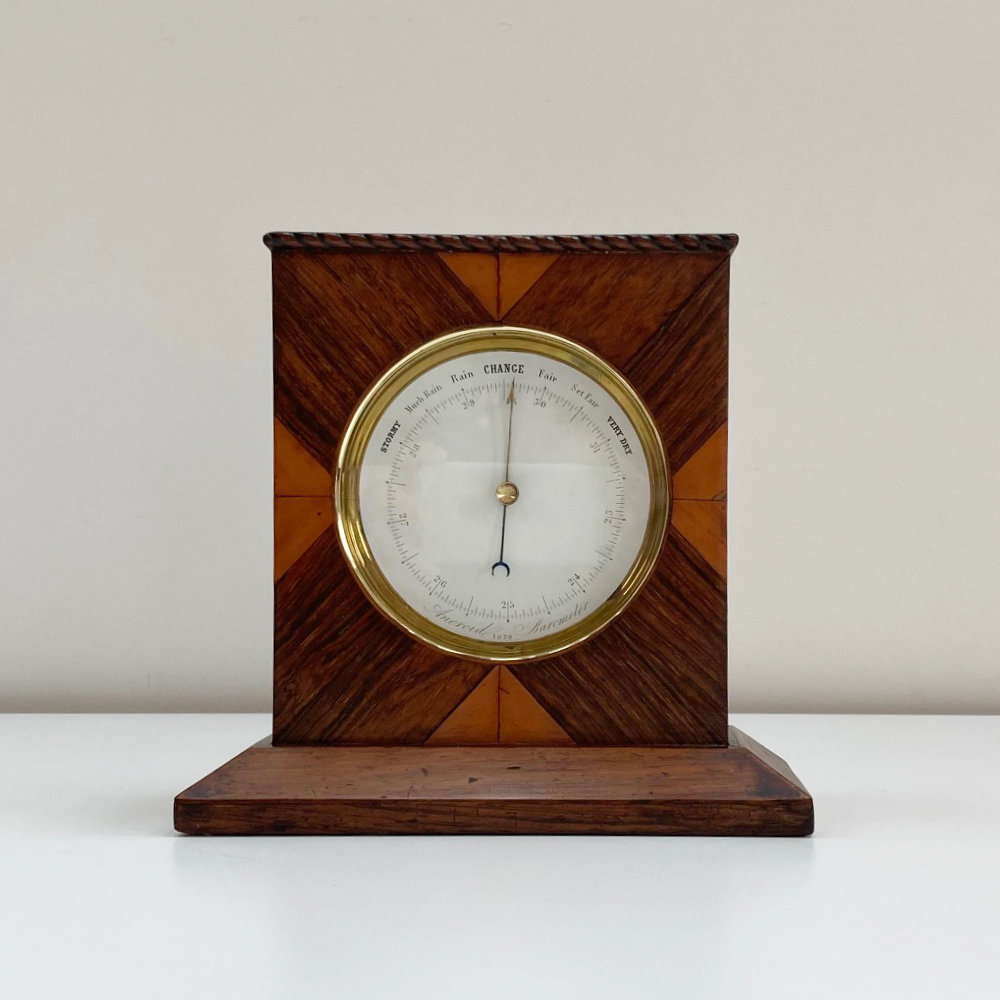 For sale, an early Victorian brass aneroid barometer in display case by Francis West of 41 The Strand London.

This early example of a display aneroid barometer is comprised of a simple graduated base with a square section upright beautifully veneered using walnut and satinwood in an interesting cross design which leads the eye to the barometer housed at the centre. The stand is completed with a simple but elegant rope twist beading around the top edge.

The barometer’s construction follows closely that of the original Vidi barometer with graduated brass case and hanging loop to the top. The card dial also bears the Vidi type weather indications with a wide scale measuring 23 to 31 inches of barometric pressure. The base of the dial is also printed with the words “Aneroid Brometer” and a serial of 1076.

The reverse of the barometer provides a very good indication of its age owing to the location of the altitude adjustment screw placed at the base. Due to the developments of the aneroid movement, the location of this screw was quite quickly relocated to the four o clock position on later examples.

Francis West is perhaps most famous for popularising the Stanhope lens from his premises in Fleet Street, he was an enterprising character who during his career, demonstrated himself to be an adept marketer as an early advert for his lens in the Comic Almanack of 1836 shows:

“Christmas – I tell you what?

It is mounted to be worn like an eye glass, in gold, silver or metal; will suit every sight, and has the uses of the microscope without the trouble of adjusting. Observe, the genuine can only be procured of the original maker, Francis West late Adam’s, Optician to His Majesty, 83 Fleet Street, or through any of the London Booksellers. The name “West Inventor” is stamped on the genuine instrument.”

West quite clearly had a flare and an appreciation of the power of the advert and his reference to the famous Adams dynasty suggests that he had taken over the families affairs following the demise of Dudley Adams’s business. The suggestion seems to be somewhat fantastical though, given that Dudley Adams had entered bankruptcy proceedings some twelve years prior to West opening his business in 1828. It is likely that the Fleet Street connection was good enough reason for him to also shoe-horn the use of Adams’s Royal Appointment into his literature.

West certainly did have some credentials though, he had undertaken a Spectacle Makers Guild apprenticeship in 1806 and in 1828 moved into the retail trade on his own account where in addition to spectacles, he sold numerous other scientific instrument and “intellectual toys” and is considered to have also invented the bell whistle. He was also known to have sold reprints of numerous eighteenth century texts by famous scientific instrument makers. If his trade card is to be believed, he had also garnered links to the Admiralty suggesting that he was also making nautical instruments.

His son Francis Linsell was apprenticed in 1835 and worked with his Father until 1849 whereupon he took up premises at Southampton Street. The elder Francis is considered to have continued trading until 1852 so it is likely that Francis Linsell expanded and eventually took over the family business as he is later noted as trading from 31 Cockspur Street and Fleet Street.

The firm continued to produce and retail an array of scientific instrument and although not listed at The Great Exhibition, Francis Linsell is ranked amongst the exhibitors at The 1862 Exhibition where he is mentioned for barometers. He was also by this time a member of The Spectacle Maker’s Guild.

He ran the business until 1885 and there is no indication that it continued after that point, therefore it is reasonable to assume that the West business was dissolved upon the son’s retirement

A very early aneroid barometer with a very unusual and interesting display case.