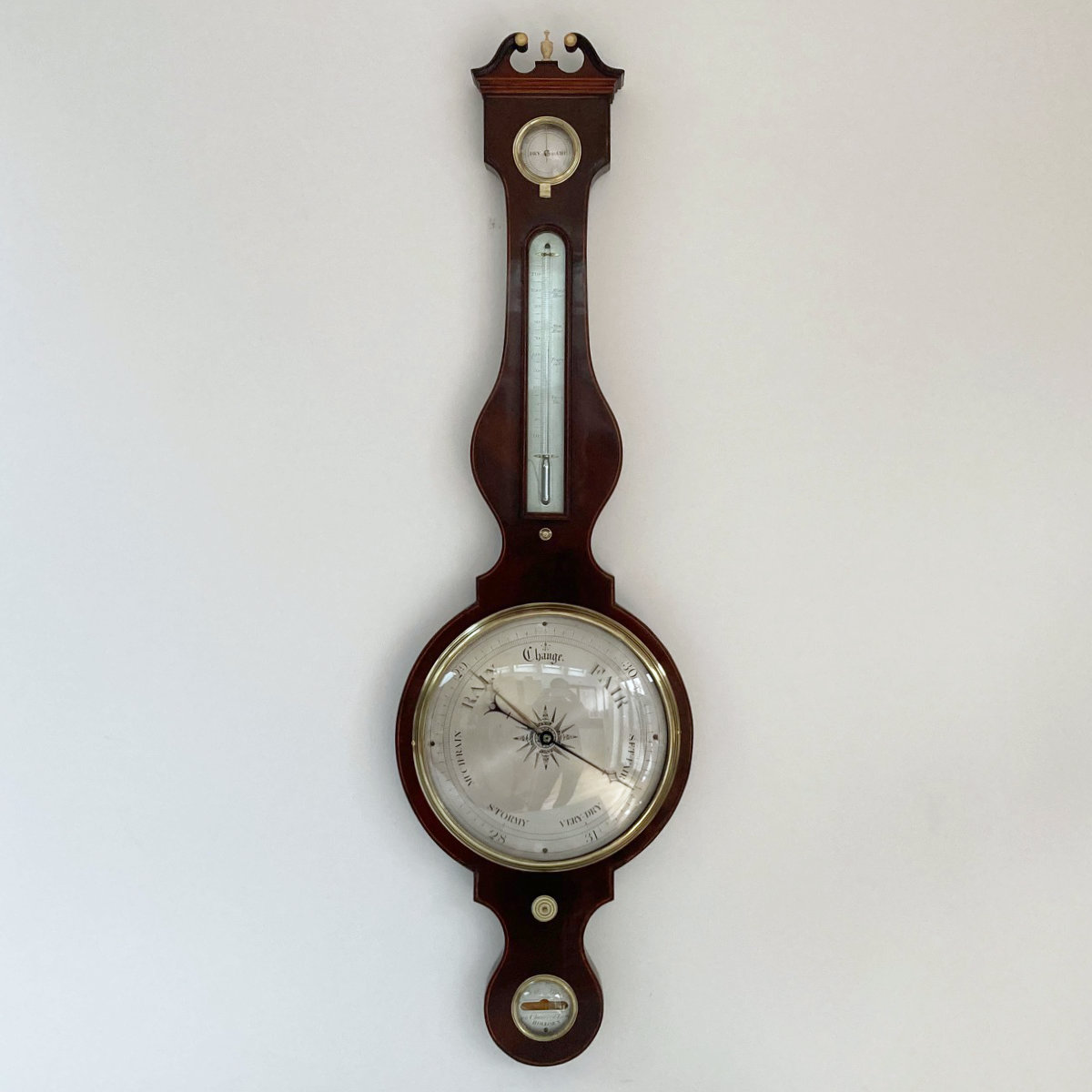 Comprised of a mahogany veneered body with satinwood inlay around the outer edge and a swan neck pediment with urn finial to the centre. The neck of the case is fitted with a removable wheat beard hygrometer with convex glass front and a twelve inch thermometer case with silvered and engraved Fahrenheit scale and temperature indications.

The main body has a ten inch silvered and engraved dial measuring 28 to 31 inches of barometric pressure, engraved weather indications and star motif to the centre, all completed with a spun brass bezel and convex glass front. Below is an adjuster for moving the brass set hand on the dial and a spirit level with engraved surround stating the globe-making company of J&W Newton, 66 Chancery Lane, London

The Newton’s according to Newton & Co’s late nineteenth century catalogues considered themselves to have had a long and distinguished history dating back to the start of the eighteenth century suggesting that the company founder was a cousin of Sir Isaac Newton. However, through the very long and arduous investigations by both John Millburn & Brian Gee, it is clear that although the family relationship is certainly a close one, the scientific instrument making business began somewhat later.

The origins of the Newton business can sensibly begin with Nathaniel Hill, a self-described “globe maker and engraver” who worked at The Sun & Globe on Chancery Lane from 1746 to 1764 and amongst a number of apprentices took on a Thomas Bateman.

Bateman’s early working dates are unclear but he eventually succeeded his former master maintaining the same address and in turn took on a John Newton from Hitchin as his apprentice in 1774. By 1781 it seems that Bateman’s business had been taken over by Newton (who must have just finished his seven year apprenticeship term) and another more established engraver, William Palmer. Palmer himself had in 1770 apprenticed another future leading globe maker, John Cary but must have considered the partnership with the newly established Newton (and the goodwill of Bateman’s business) a sensible business opportunity. The partnership however, was short lived and from 1783 John Newton according to trade cards was trading alone, presenting himself as successor to Mr T. Bateman.

From this point forward, the business became a sole Newton affair, John had a number of sons and his second William entered the globe making enterprise where after in 1818 it was renamed as J&W Newton.

It is interesting (and historically confusing) that the Newtons’ at this stage had also taken a keen interest in the new and growing business of patents. The family was intrinsically linked to this industry throughout the Nineteenth Century and William is recorded as being patent agent on numerous early applications. This side of the business is notable for the fact that William Newton is still considered one of the founding fathers of the Chartered Institute of Patent Agents. In 1830, a Miles Berry was also partnered into the new company of Newton, Son & Berry and aside from Berry’s main involvement in the patent industry, his name is also seen applied to globes produced by the company in this period.

By 1840, William had two teenage sons, William Edward and Alfred Vincent, he was also now a wealthy and influential member of London Society becoming an Associate of the Institution of Civil Engineers and Editor of The London Journal of Arts & Sciences whilst also running both a globe making business and acting as a Patent Agent. The partnership with Miles Berry ended at this early point of the decade, probably owing to John Newton’s growing age (he died in 1844) and also the coming of age of William’s sons. The company name change to Newton & Son or W. Newton & Son at this point welcomed both William Edward Newton and Alfred Vincent to the dynasty.

Whilst Alfred’s career focussed entirely on the business of patents, the globe-making company presumably under WE Newton’s guidance due to his ageing Father, took part in The Great Exhibition for which it won a prize medal. It also seems that by this point, the company had grown into a second premises in Fleet Street where the business of scientific instrument making was conducted, leaving the patent business at Chancery Lane.

WE Newton initially had a hand in both businesses, however the workload must have been significant and a cousin Frederick was brought to London from Hitchin to assist thus beginning the shortlived partnership of WE & F Newton which lasted from 1851 to 1856. Whether through preference or business need WE Newton seems only to have provided a caretaking role for the new Fleet Street business whilst the young Frederick was trained.  Thereafter, he returned to the business of patents leaving Frederick as sole owner of what was now Newton & Co in 1856, and with the accolade of “Globe Manufacturer to the Queen”, the business went from strength to strength. He later added “Instrument maker to the Consort”.

Frederick Newton continued to lead the business until his son took control in 1897 by which time the company had won prize medals at the London Exhibitions of 1851, 1862 and 1885 respectively and had earned itself international renown for prize medals earnt in India (1868), Paris (1878) and Brazil in 1884. They also boast of Royal Appointments all the way through to George V and were certainly receiving patronage from the Admiralty, The War Department, The Indian Government and the Royal Institution. The variety of goods had significantly expanded from the original globe making business and Newton were known to have stocked a vast array of scientific apparatus. They were heavily involved in the magic lantern industry producing both equipment and slides and maintaining pace with developments in electricity, were known to have worked with Alfred Apps of 433, The Strand in manufacturing and retailing the “Apps Patent Coil”.

Frederick Newton eventually died in 1909 and by 1912, HC Newton had orchestrated a move from the original premises at 3 Fleet Street to two separate premises. 37 King Street was concerned solely with the sales of Magic Lantern equipment whilst another premises at 72 Wigmore Street maintained all other areas and further manufacturing works were based at Hornsey Road. Perhaps due to the increasing workload and the need to split the two concerns, Newton had also by this time taken on a partner in RS Wright to become Newton & Wright and by 1922 it seems that for the first time in the company’s significant history, a Newton family member was no longer in charge. With RS Wright and an EE Burnside in control of the company it continued to trade until it was first purchased in the late 1950’s by the Victor Corporation to become Newton-Victor Ltd and then later fell under the stewardship of General Electric (UK) plc.

The Chancery Lane patent business also continued to flourish alongside the now separate Newton & Co business. Parts of William Edward’s line moved to Australia where they remained in the industry there and the British business finally fell to Alfred Vincent’s daughter. Having married Arthur Reddie himself a patent agent, the couple had a son Lovell Newton Reddie who went on to form the partnership of Reddie & Grose. Whilst the name of Newton & Son ceased to exist, the company of Reddie & Grose maintained strong links with the Newton family and it continues to trade to this day.

A typical form of wheel barometer from this period but to find something other than a globe with the name of J&W Newton is a huge rarity, it also provides historical proof that the globe making business was selling other scientific instruments during their early history and prior to the creation of Newton & Co.