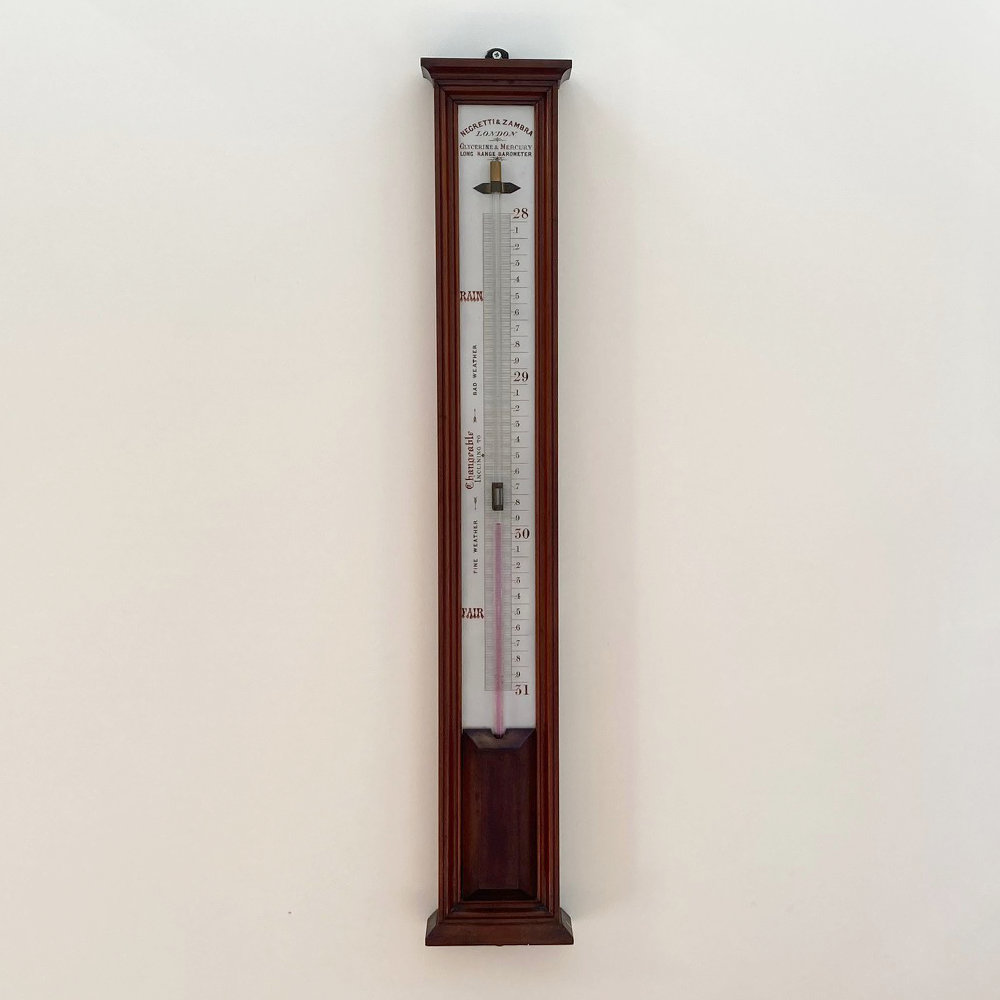 This unusual and superbly decorative barometer is comprised of a long rectangular architectural mahogany case with stepped pediment and base. The scale is entirely comprised of an opaline glass front with painted barometric pressure readings from 28 to 31 inches and weather indications to the left hand side. The top of the scale is painted with the maker’s name, Negretti & Zambra, London and the name of the barometer below. The barometer is completed with a raised mahogany cistern cover at the base.

This ingenious stick barometer was devised by Negretti and Zambra in order to make accurate barometer reading easier for the observer. This strive for user friendly weather forecasting culminated in their later and renowned weather forecasting patent instruments. This early development as is reflected in their 1870’s catalogue below was intended to remove the pain of complex Vernier measurements against the normally small scales of the domestic barometer and although it eventually proved to be less accurate than its predecessors as a serious scientific instrument, it certainly remains accurate enough for common domestic use. It also rivals most examples for its sheer decorative presence. The following explanation should be read in conjunction with the image provided:

“The Long range or open scale barometer consists of a glass tube of the syphon form; one side of the syphon A (or closed end), being about 33.5 inches long, and the other only a few inches in length. To this short end is joined a length of glass tubing B, of a much smaller internal diameter; both tubes are of equal length, the smaller one being open at the top. The large tube A, is filled with quick silver, and the small tube B is partly filled with glycerine, a fluid many times lighter in specific gravity than quick silver; the rising and falling of the quick silver column in the large tube having a lighter fluid to balance, and that dispersed over a larger space by reason of the difference in the diameter of the two tubes, a longer range is obtained due to the unequal capacity of the two tubes and the difference in the specific gravity of quick silver and glycerine.

The range of these barometers is from six to ten inches to the inch of an ordinary barometer. A hundredth of an inch can easily be observed without the use of a Vernier. It is a most interesting instrument, as from the extremely extended scale the slightest variation is plainly visible. The actual size and form is about that of an ordinary barometer”.

A rare, interesting and very beautiful stick barometer by the foremost makers of meteorological instruments of the Nineteenth Century.