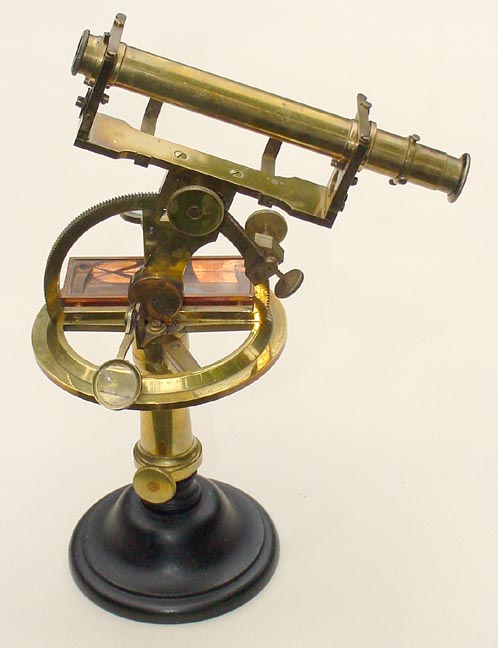 MINIATURE BRASS AND COPPER THEODOLITE, French, c. 1830, finely signed “Huette a Paris,” standing only 7″ (18 cm) tall from bottom of staff mount to top of telescope. The upper assembly rotates in azimuth on a 4″ diameter horizontal circle which is precision divided every half degree full circle, with twin one-arcminute verniers and an articulated scale magnifier. A copper-bodied (copper presumably to minimize magnetic disturbances) trough compass rotates with the assembly, and has twin magnetic declination scales divided ±0(0.5)20, and its own swiveling scale magnifier. The vertical semicircle is divided every one-third degree over the range 0±100, and is cut with external rack gearing. The telescope’s motion in altitude is by pinion gear, with clamp, long tangent screw fine motion, and one-arcminute vernier. The telescope itself is reversible in its wyes, and gives inverted images. Condition is fine, the brass cleaned, and an auxiliary spirit level apparently lacking. A system of swing-away peep sights gives naked eye sighting parallel to the telescope axis.

We find only limited information about Huette; Nachet records him as working at what was possibly the former workshop of Canivet, and as being succeeded by Loiseau in 1841; Marcelin finds him at 75 quai de l’Horloge in Paris.