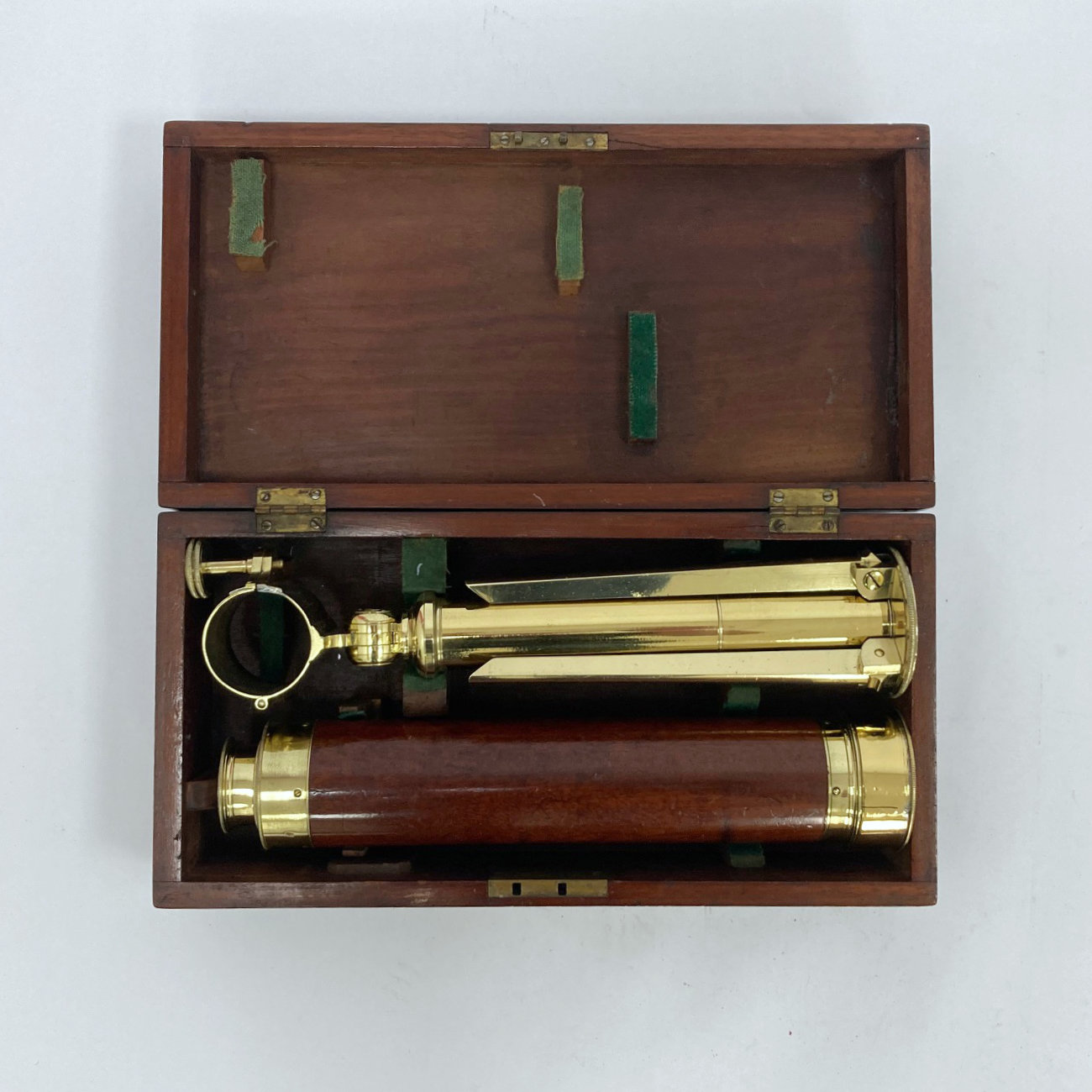 For sale, a Regency period cased telescope on stand by Joseph Smith of Royal Exchange, London.

This fine example consists of a three draw achromatic telescope with a 1.5” objective lens and original dust cap, a mahogany barrel and dust slide to the eyetube. The telescope measures, 77cms extended and 25cms closed and is engraved for the maker, J Smith, Royal Exchange, London to the first draw.

The accompanying tripod is cleverly designed in three parts in order to maximise its usefulness and facilitate easy transit. The tripod legs are threaded to the brass stem at the base and may be reversed for efficient packing and then unscrewed, turned and splayed when required for use. The top also has a universal joint to allow for horizontal and vertical movement and a hinged ring into which the telescope can be placed and secured by means of a knurled screw.

An additional feature also allows the stem of the brass shaft to be unscrewed at the halfway point to reveal a screw thread. This is perhaps the earliest example of this feature which I have encountered, and it was intended to allow the user to screw the telescope to a branch or perhaps a fence post when operating in the field, where the use of a tripod may not be practicable.

The set is complete with its original fitted mahogany case which bears a small brass plaque to the lid engraved with an owner’s name, H Harvie.

The business of Joseph Smith could boast of links to the great Eighteenth Century instrument maker Edward Nairne through the acquisition of James Long’s business and premises in 1811.

Long was apprenticed to Edward Nairne alongside such other important names as James Ayscough, Thomas Blunt and Jesse Ramsden who is considered to have worked for Nairne at some point in his early career.

It seems very likely that Joseph Smith was a senior workman or foreman for the Long business as the takeover was almost immediate, and evidence does not show Smith as having trade independently prior to this date. The good will of Long’s business and industry standing coupled with Smith’s evident skill in manufacture allowed the company to continue to prosper until his death in 1825, whereupon, the business was again transferred to Stephen Bithray, one of Smith’s employees. It continued under his name until his death in 1858.