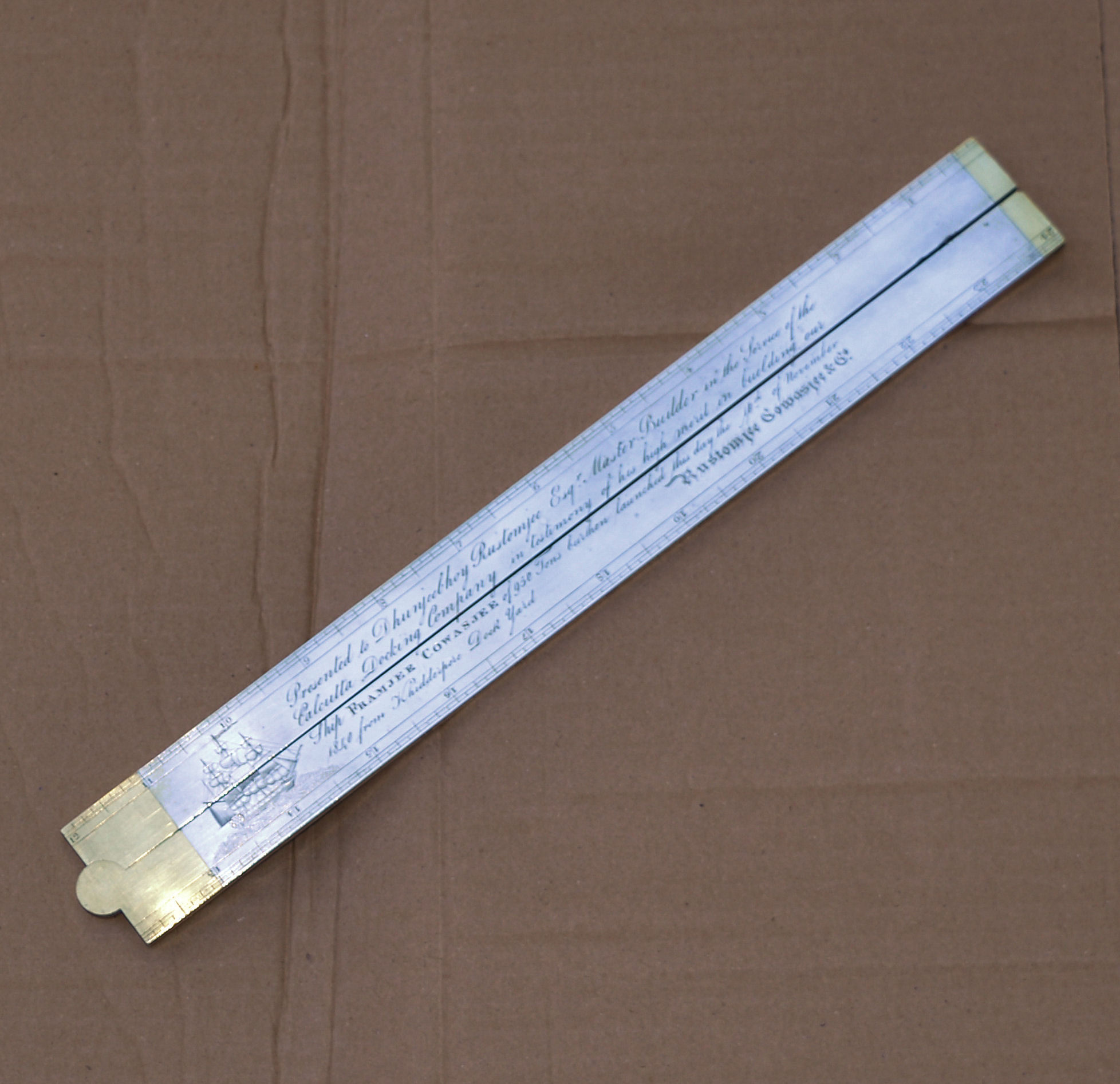 Truly unique, a one-off, solid silver presentation slide rule signed in script, ‘ Presented to Dhunjeebhoy Rustomjee Esq’r, Master Builder in the Service of the Calcutta Docking Company in testimony of his high merit in building our Ship FRAMJEE COWASJEE of 950 Tons burthen, launched this day the 11th of November 1840 from Kidderpore Dock Yard.   RUSTOMJEE COWASJEE & Co. ‘.

Measuring 12 inches in length and folding out to 24″ with brass hinge and tips to the ends, various measurements either side, engraved ship motif, engraved scales to the edges and inner slider.

Dhunjeebhoy Rustomjee was the second son of Rustomjee Maneckjee (1766 – 1812), who was Master Builder at Mazagon Dock, Bombay c.1801. Born 14th Dec 1799, Dhunjeebhoy built three ships in Cochin, south Goa; two for Bengal and the ‘Oriental’ for Bombay. In 1834 he returned to Bombay but in 1837 he moved to Calcutta and worked first in the Howrah Dock and then Kidderpore as Master Builder. He married the daughter of the docks owner (Rustomjee Cowasjee) and built the ‘Syren’, the ‘Framjee Cowasjee ‘ and the ‘Rustomjee’.

He returned to Mazagon (Bombay) in 1842 to become Master Builder in the Moghul Dock and stayed, as such, for P & O until his death in 1854.

The Kidderpore Dockyard  was owned by Rustomjee Cowasjee, born in Bombay in 1792 and came to Calcutta in 1812. Also known as Rustomjee Cowasjee Banaji, he was the first Indian to venture into partnership with the British. He purchased Kidderpore Docks (previously known as the Calcutta Docking Co.) from the estate of the late James Kedd for Rs 2,51,000 and also the Sulkia Docks. He was a prominent ship owner.

Rustomjee Cowasjee & Co owned about 40 ships: half the ships were chartered by the British Government from 1839 onwards for war purposes.

Dhunjeebhoy Rustomjee, who the rule is presented to, comes from a fine line of ancestry Indian Master Ship Builders:

Lovji Nusserwanjee Wadia advanced the Wadia shipbuilding dynasty in 1736, when he obtained a contract from the British East India Company for building docks and ships in Bombay (present-day Mumbai).