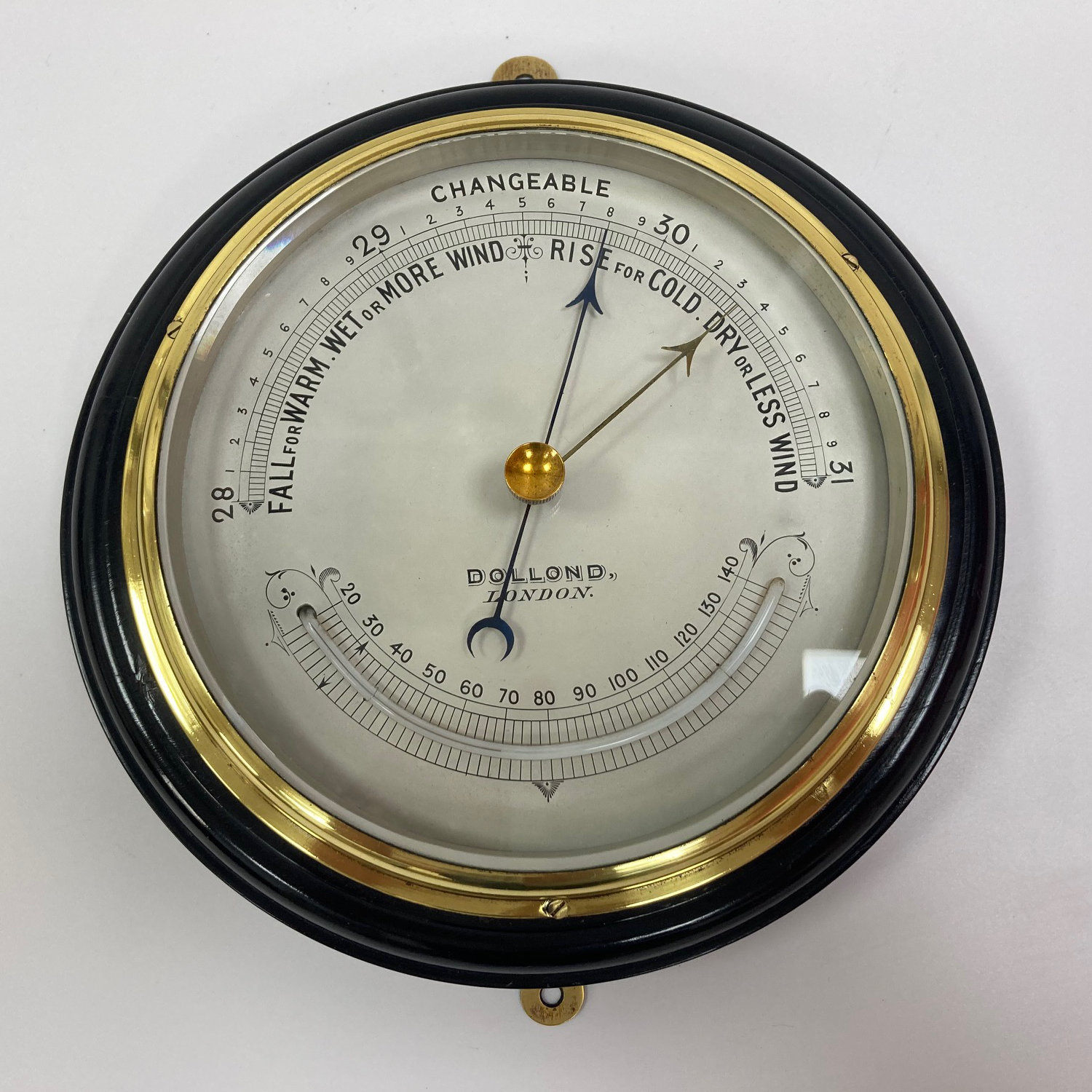 For sale a superb Victorian aneroid wall barometer with ebonised wooden case by Dollond of London.

Comprised of a six-inch silvered dial with a semi circular engraved scale to the upper half which measures 28 to 31 inches of barometric pressure to the outer edge and with detailed weather indications around the underside.

The lower half is adorned with a semi-circular thermometer and engraved Fahrenheit scale which encircles the makers engraving to the famous scientific instrument making firm, Dollond London. The centre of the dial has a blue steel pointer with half moon design and a brass set pointer which is hand operated through the front of the wonderfully thick and generously bevelled dial glass.

The barometer is completed with a deep, spun brass bezel and a graduated, ebonised wooden case with brass hanging loops to the top and bottom. The full case measures 8.5″ in diameter and 2.5″ deep.

The Dollond Company was set up in Hatton Garden in 1750 by Peter Dollond with his father John joining him shortly after. John Dollond’s invention of the achromatic lens (although bitterly disputed) led to his award of the Copley Medal by The Royal Society in 1758 and following this success, Dollond moved to The Strand where the company was appointed optician to George III and the Duke of York in 1761. John Dollond Senior died in the same year, however the business was continued by the brothers Peter and John Dollond (P&J Dollond)

Following the death of his brother John in 1804, Peter Dollond took his nephew George Huggins into partnership and after a change in surname, the company continued under a refreshed Dollond partnership until Peter’s death in 1820, the same year that they were jointly made opticians to George IV.

The company continued its association with royalty and went on to win a Great Exhibition Medal in 1851, a year before George’s death. His nephew (also George) succeeded in the ownership until his death in 1866 where after his son William continued to run the business. William was the final Dollond family member to run the company, finally selling out to a former employee of the company, JR Chant in 1871 who renamed the company as Dollond & Co. After this point a partnership was formed between Chant and Tyson Crawford (as Financial Controller) with the latter taking sole ownership in 1892 until his retirement in 1903. It was then sold to the Parson Brothers who turned Dollond into a Limited Company in 1907. Having suffered from the effects of the First World War and further compounded by poor management, the company was finally merged with Aitchison & Co in 1927 whereafter it became Dollond & Aitchison. It remained a familiar site on the British High Street until 2009 whereafter it became part of Boots the Opticians.

An uncommon Dollond example both in size and design, and the larger six inch dial provides the presence it would need for wall hanging. A fine Victorian aneroid barometer.