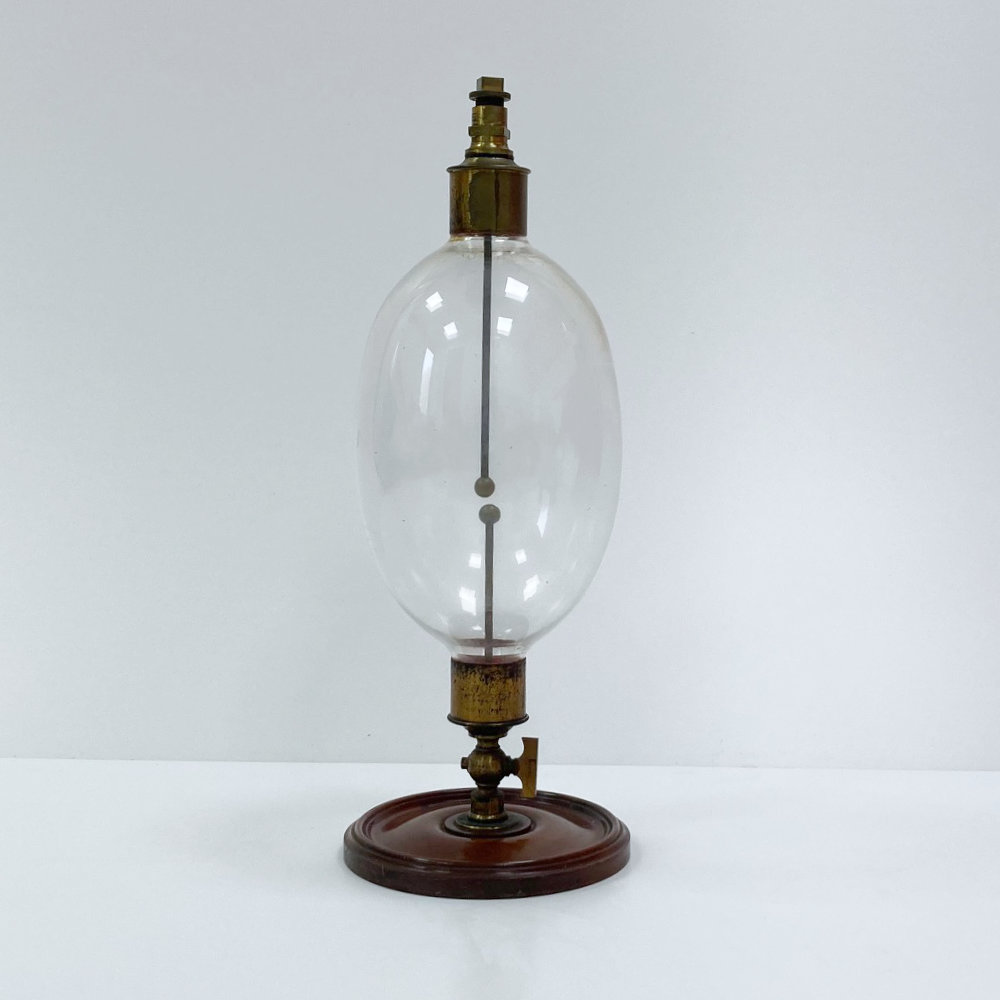 Comprised of a turned mahogany base with brass cup fitting and release valve engraved to W Ladd, London. The cup provides the seat into which the ovoid formed glass flask is positioned and also holds the lower electrode in place within the flask.

A similar inverted brass cup is attached to the peak of the flask and through which a second, longer electrode is introduced at the top, screwed in by means of a second threaded section. This allow the electrode’s length and subsequent spark gap within the vessel to be shortened or lengthened accordingly.

This apparatus was original designed by the famous electrical engineer, Michael Faraday (1791 – 1867) initially to confirm whether atmosphere or matter was required for an electric current to operate. By this means, a vacuum with internal electrodes could be created and a current applied externally. Having satisfied that the presence of a vacuum did not impede the current, he went on to discover that the use of different metals for the electrodes and different gases would affect the colour of the spark emitted. A principle that eventually resulted in the development of spectroscopy.

This example retains the important maker’s engraving for William Ladd who is known to have worked on instruments for Faraday and The Royal Institution so his affiliation to early modern electrical experimentation is significant.

Born in Kent in 1815, little is known of his early life, but he began trading in London during the early 1840’s and after numerous changes of premises throughout the proceeding two decades, he finally settled at 11-12 Beak Street in 1860.

He enjoyed enough success to have exhibited at The Great exhibition, the 1862 Exhibition and the Paris Exposition and was a prominent member of numerous scientific societies during his career. His catalogues of the 1860’s certainly confirm his relationship with the Royal Institution and numerous Government departments both at home and abroad.

Ladd traded until 1882 at the Beak Street address where after the business was sold to Harvey & Peak who may have been workers or foreman at the business prior to their takeover. They certainly continued Ladd’s appointments with The Royal Institution, Universities and scientists in their early trading period pointing to an enduring level of confidence and trust in the successor’s abilities.

Harvey & Peak continued to trade from Beak Street from 1882 until 1891 whereafter they moved to Charing Cross Road. The partnership was dissolved in 1899 but William George Harvey maintained the business until 1909.

A hugely important piece of electrostatic experimental apparatus. Presumably due to their fragile nature, these are seldom encountered other than in text books or trade catalogues from the period. To find an example by one of the foremost electrical instrument makers of the period, who had a direct with Faraday himself is extraordinarily rare.

The height is 54cms with a glass diameter of 18cms.