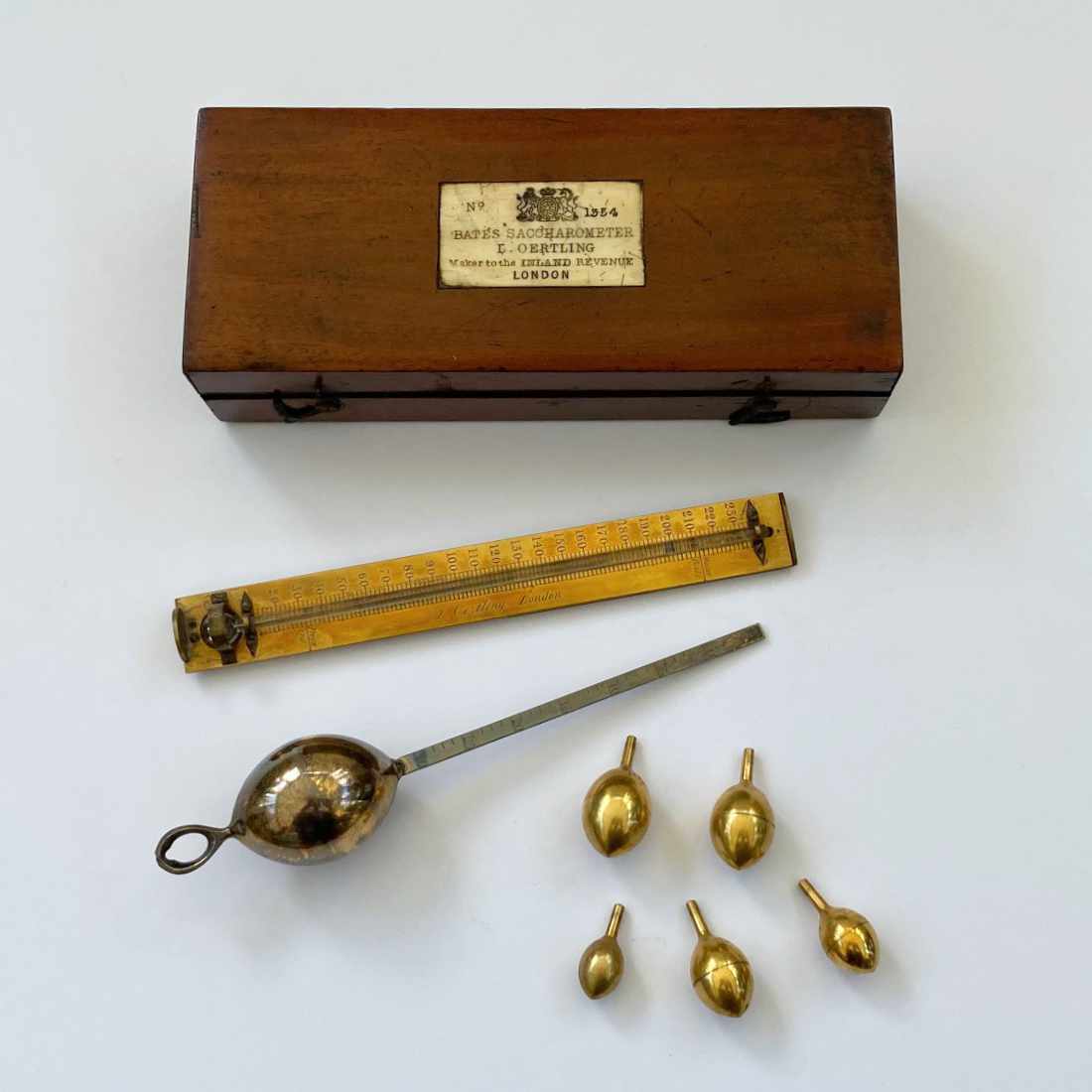 Contained within a mahogany case with a black felt fitted base and lid, this rare complete example is comprised of a brass saccharometer with scale marked 0 to 30. One side is minutely engraved with “Bates Patent” and the serial number 1354, whilst the other is engraved to the maker, L.Oertling, London. The loop at the base of the instrument is provided with a small hole for the fitting of individual weights.

Five original poises (weights) fit neatly around the scale arm within the case, and all are again marked with the same serial of 1354 at the base and then their various weights around the top edge.

Perhaps most pleasing is the existence of the original (and functioning) brass Fahrenheit scale thermometer with distinctive pad foot at the base and extendable hanging loop at the top. The side of the scale again engraved to the maker, L. Oertling.

The case is complete with its original hook and eye type fasteners and a cartouche to the lid stating:

“BATES’ SACCHAROMETER – L. OERTLING – MAKER TO THE INLAND REVENUE, LONDON”. It has the serial number of 1354 stamped to the top of the plate either side of the British Royal Coat of Arms.

An interesting example in terms of its age, its completeness and for the maker’s links to the originator of this type of saccharometer, Robert Brettell Bate. Bate’s full history is perhaps too long to provide full details for the purposes of explaining this instrument but can be found on numerous other examples of items contained within my website. He did, however, retain an effective monopoly on the provision of hydrometers and saccharometers to the government up until his death in 1847 and his company’s subsequent existence until 1850.

Ludwig Oertling arrived in the UK in 1844 having already trained as an instrument maker in Germany and by 1847 had established his own business at 12 Store Street in London. His primary skill was in the production of balances, and it is very likely that he either worked for, or supplied goods for resale to Bate during this early period. His work was already at this early stage of a suitably high standard that in 1851 he earned a prize medal at The Great Exhibition.

Advertising during the period provides a slightly ambiguous suggestion to their historic links:

“the long experience of Edward Wilds Ladd with the late RB Bate in the construction of hydrometers and a like experience on the part of Ludwig Oertling in the manufacture of balances.”

Whilst the above does not 100% prove Oertling’s earlier association with Bate, it is certain in 1864 that both Ladd & Oertling were both witnesses to Bate’s daughter’s will.

The partnership prospered until 1868 whereupon it was dissolved and Oertling continued to carve a reputation for fine balances of all kinds until his death in 1893. The company continued under family ownership until it was finally consumed by Avery in 1925, however the name continued to be applied to balances until the late Twentieth Century.

Exact dating of this fine and complete example is somewhat difficult, but a few indications can assist with attribution. Foremost is the mention of the Inland Revenue on the top of the case. The Inland Revenue was formed in 1848 by the amalgamation of the Board of Excise & The Board of Stamps and Taxes which provides firm confirmation of the earliest possible date of manufacture. Coupled with the closure of the Bate business in 1850 who retained the Government business up until this point, it is unlikely that Oertling would have manufactured and sold a Bate Saccharometer in direct competition.

What is interesting however, is the distinct similarity in case and instrument design to the original Bate examples. I have seen numerous (always incomplete) examples of Bate’s output and excepting the name, it aligns in every detail. It should also be noted that the Oertling and London stamps on the top cartouche also look slightly misaligned and in a different font respectively suggesting a later addition.

It is therefore my suspicion that this is either a finished example of a Bate saccharometer which was produced by Oertling for the Bate company and which became surplus to requirements after its closure, or was subsequently produced for sale using the same design and manufacture principles that were required of the Bate workshop. It suggests therefore, that Oertling may also have formed a relationship with the Inland Revenue after the closure of the Bate business. It would also give some meaning also to the later partnership with Ladd in 1860.

I have given further thought to this example being manufactured post the dissolution of the Ladd partnership but it seems to me unlikely that the allegiance to Bate’s designs and the mention of his patent would still be applied to the instrument some 21 years after his death.